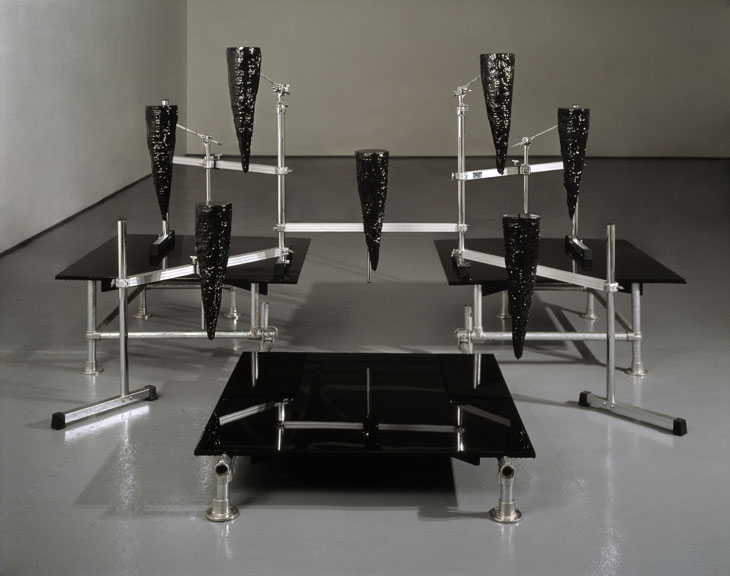 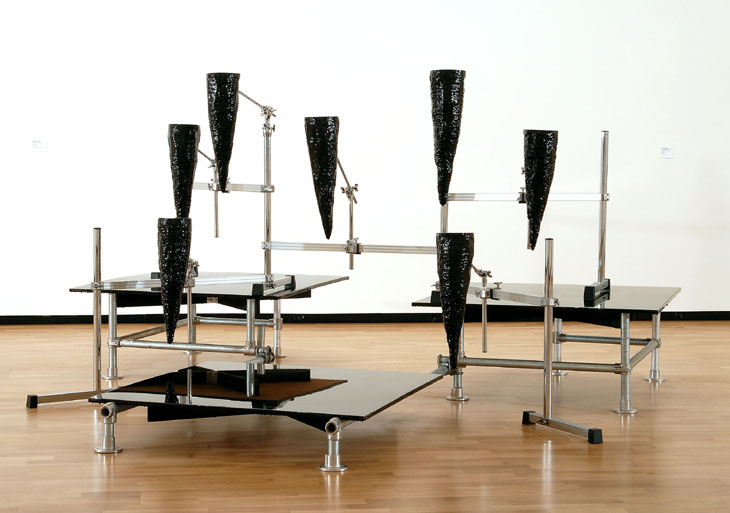 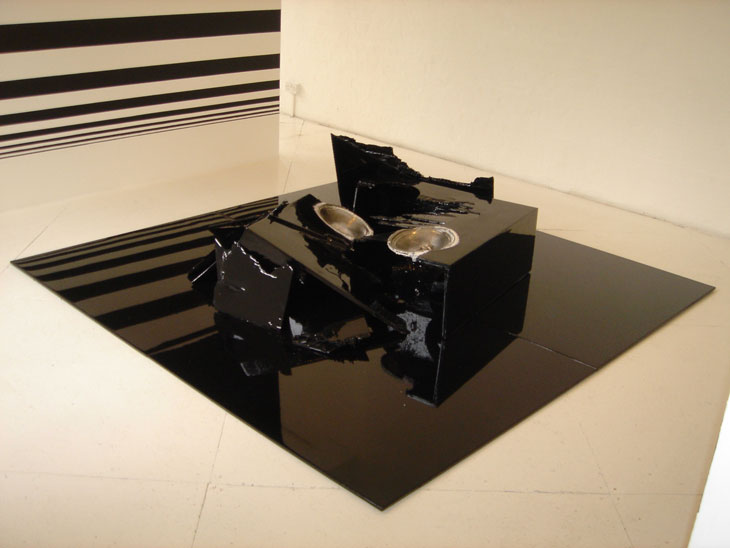 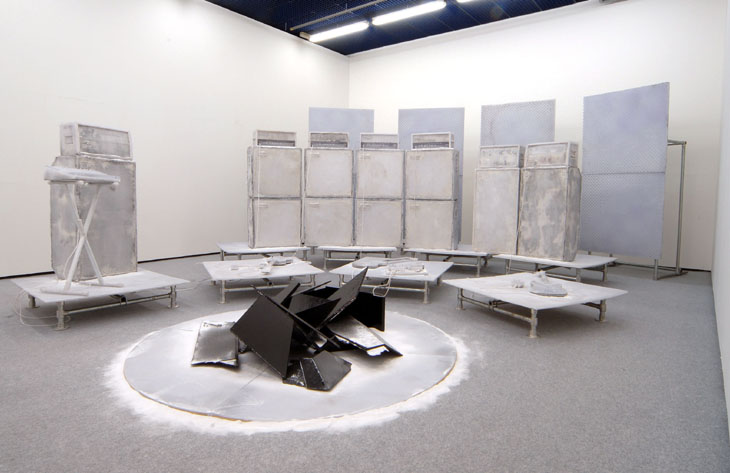 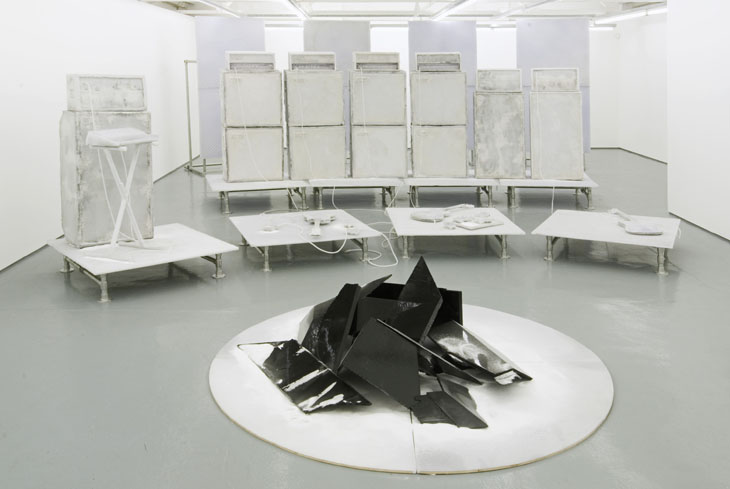 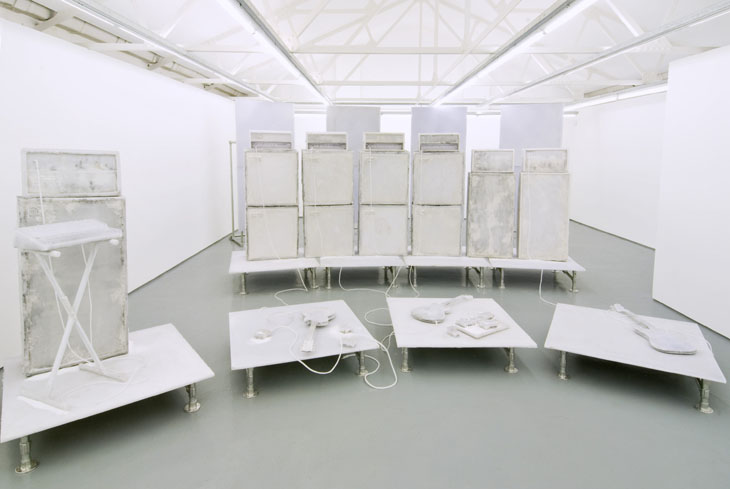 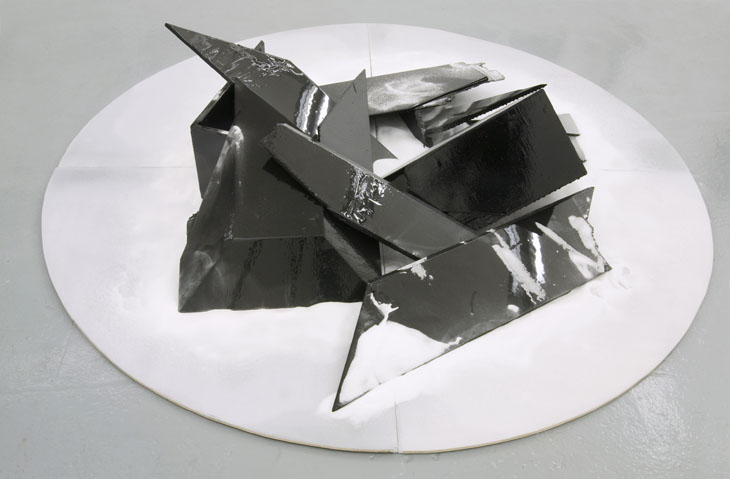 Banks Violette’s Hate Them replicates a nightmarish teenage psyche. His minimalist suggestion of a rock band hovers above a sound stage with barbaric awe. Bank’s gnarlish fang-like forms encapsulate a testosterone-fuelled aggression with an iconic and primal flair. Drawing correlations between subculture and theatre, Violette addresses Black Metal as a performative act without clear limitation: a unique spectacle where artistic meaning is often literalised into real belief. Fuelled by its associations with violence, satanism, racism, and nationalism, Violette uses the Goth genre as both symptom and cause of individual immorality and social breakdown.

Death metal, ritual murder, and teenage suicide are mere starting points for Banks Violette; his gothic installations construct operatic analyses of the dark side of American culture. In works such as Black Hole, Violette aptly portrays this phenomenon of excess. Heavy-metal aesthetics become a mirror of youth culture anxiety, an adopted language compensating and empowering sensations of immense sorrow and despair. Citing examples where musical lyrics become instigating factors to real-life violence, Violette refers to an over-identification with fiction where artistic expression exceeds critical confinement, and fantasy and reality are blurred. Black Hole lingers on this edge of transition: its aestheticised destruction offers both horrific contemplation and potential for misuse.

Banks Violette’s Untitled takes as its origin a performance by the rock bank SunnO))) which the audience was allowed to hear, but not to see. Casting their stage equipment in salt, Violette’s Untitled comprises the only visual documentation of this event. Through its strange crystalline and ghostly presence, Untitled captures the lingering aura of ominous phenomena. Reminiscent of the biblical story of Sodom, Violettle’s contemporary ‘pillars’ of salt give aftermath testimony to forbidden indulgence. During SunnO)))’s performance, the lead singer was encased in a black coffin. Represented as a shard-like abstraction, an ebony form takes centre stage as a mysterious monument of dissolution.
×