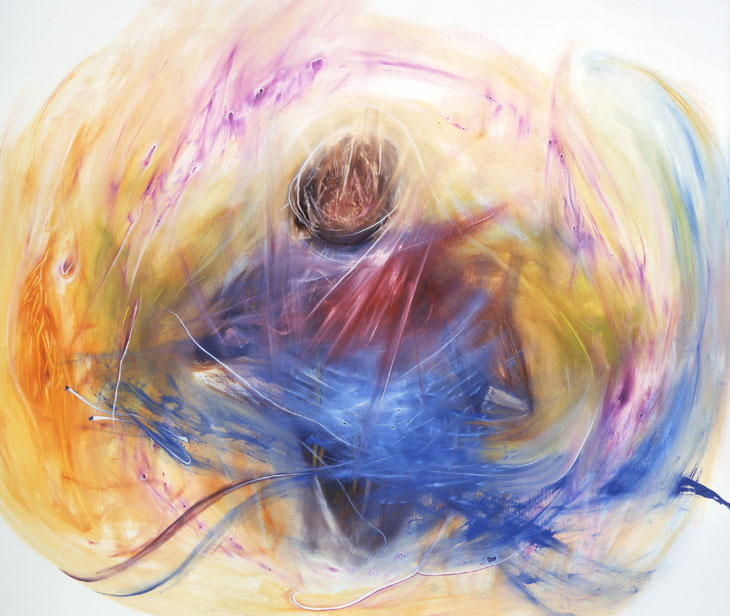 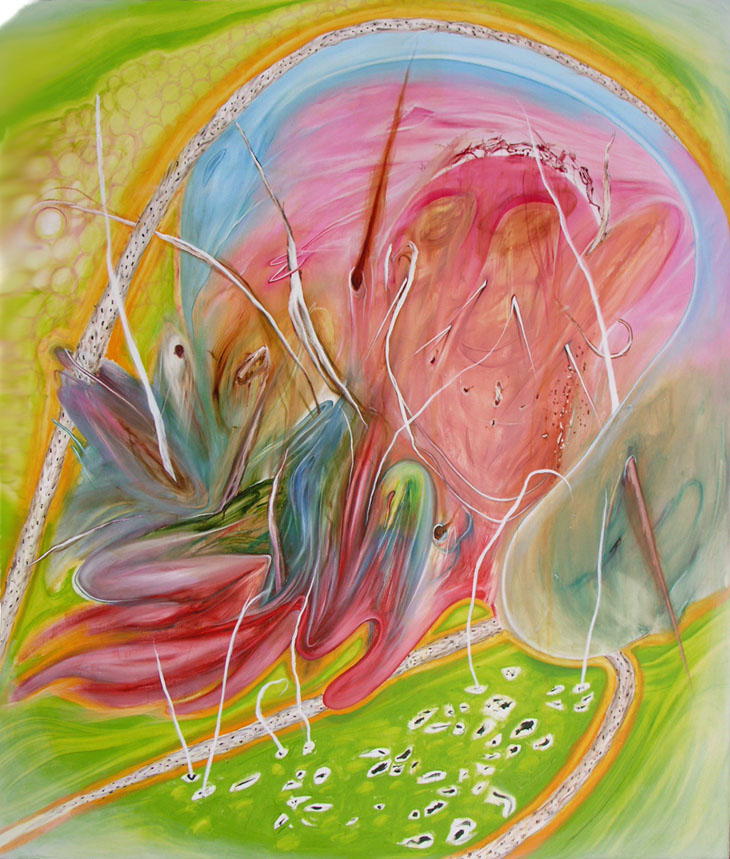 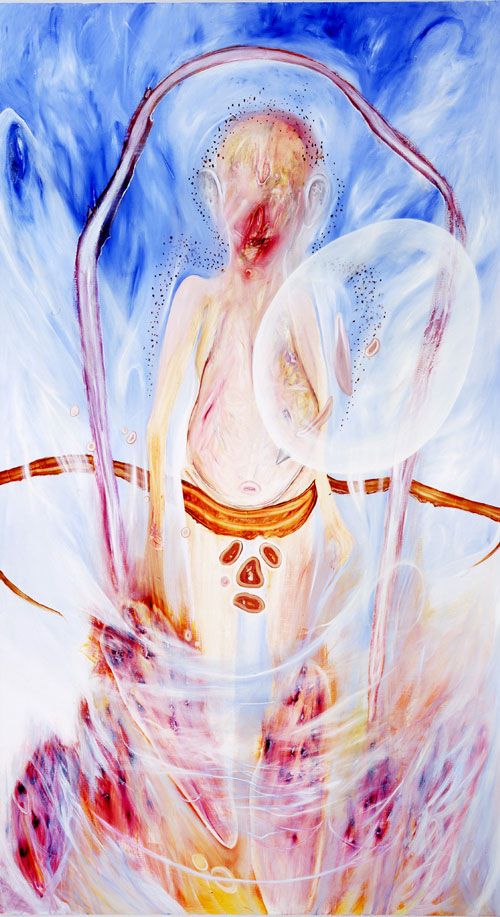 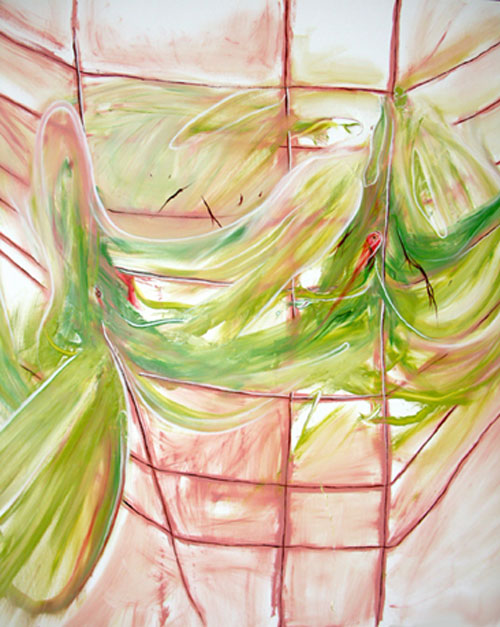 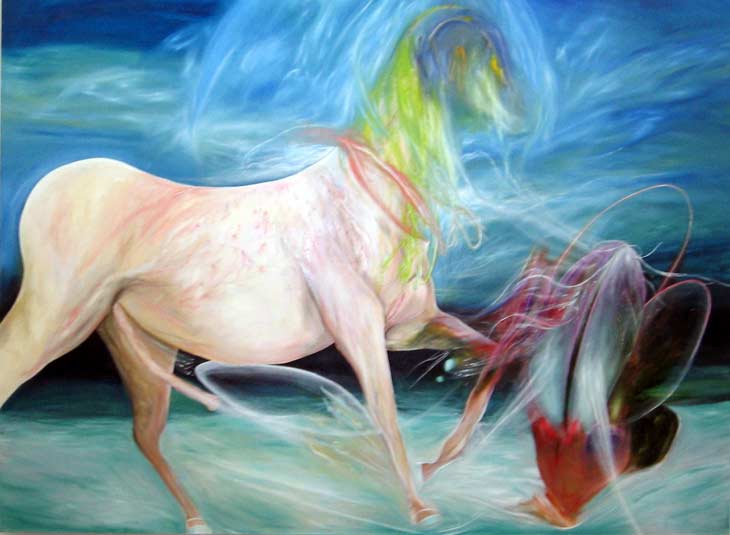 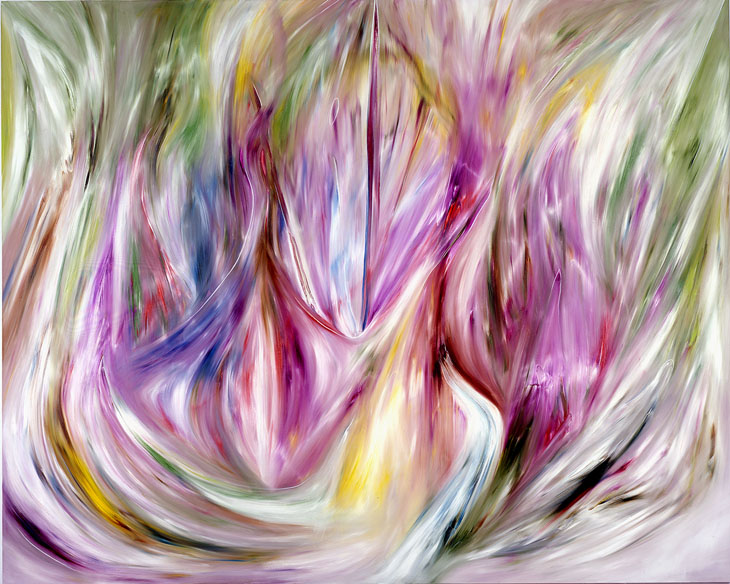 Daniel Hesidence approaches his practice as a philosophical totality. Situating himself as the inventor of an ever-expanding universe, Hesidence’s individual pieces provide mere glimpses into a creative infinite. Composing his work in ‘volumes’, Hesidence’s paintings document a self-propelled evolution. Each canvas is distinct yet interconnected, holding its own place in his ‘cosmological’ timeline. Untitled is indicative of Hesidence’s stream of consciousness process. Emerging from the blank white canvas, impassioned smears of colour form a halo around a suggested figure. Rather than defining an image, Hesidence uses the malleable qualities of paint to portray an emotional and psychological state. Distant and dream-like, the intricacies of sentient gesture form a physical representation of the intangibility and impermanence of thought.

Embracing painting as an unlimited form of expression, Daniel Hesidence’s works describe a means of sub-language communication, something primal and emotive that exceeds linguistic structure. Hesidence’s style ranges from figuration to abstraction, but his subject matter is always what lies beyond the surface. Ranging from dense impasto to delicate washes, frenzied brushmarks and disquieting voids, Hesidence’s refined techniques transform reticent sentiment into tactile physicality. Mapping out the idyllic meanderings of cerebral terrain, Untitled’s colourful fantasia playfully conveys amorphous vitality with an aura of pastoral calm.

Sensations of velocity and beautified discord are omnipresent throughout Daniel Hesidence’s work. Executed with a poetic sensitivity, his compositions convey both intimacy and turmoil. Through gesture, mark-making and an intuitive handling of his medium, his forms attempt to decode both personal and social consciousness. Hesidence approaches his work as a way to process collected information, to rationalise the instinctual visual dialogue through which we interpret our environment. Through reassembling forms, images and impressions, Hesidence transcribes this language through his own experience and dialect, offering alternative perceptions and meanings based in creative possibility.

Daniel Hesidence describes his work as a process of decoding consciousness. Working from a memory bank of visual information his practice is based on an intuitive negotiation of imagination through tangible media, narrating the sluices of thought through spontaneous and unmediated painterly response. Often working on several canvases simultaneously, each image feeds into and progresses from a continuous dialogue. In Untitled, the form of a horse dissipates into a torrential abstracted field. Painted with restrained energy, raw emotions of power and sexuality are tempered through Hesidence’s romantic palette and sybaritic brushwork. Rendered in monumental scale, Untitled is arresting in its passive grandeur; its dramatic climax is emitted with an unsettling elegance and rarefied potency.

1 7 3 6 is from Daniel Mimicking the flickering seduction of fire, Hesidence presents an entanglement of colour that dances across the canvas with effulgent brilliance.Hesidence’s most recent body of work. Shifting from the lyrical eclecticism of his FARM and Post FARM paintings, 1 7 3 6 is forceful in its visual intensity. Punctuating deep greens and cool violets with radiant white highlights, Hesidence’s 1736 conveys both a spectral luminosity and sculptural depth. Giving physical form to ethereal sentiment, Hesidence’s impassioned gestures and gaseous hues transpire as a consuming field of meditative fixation.
×