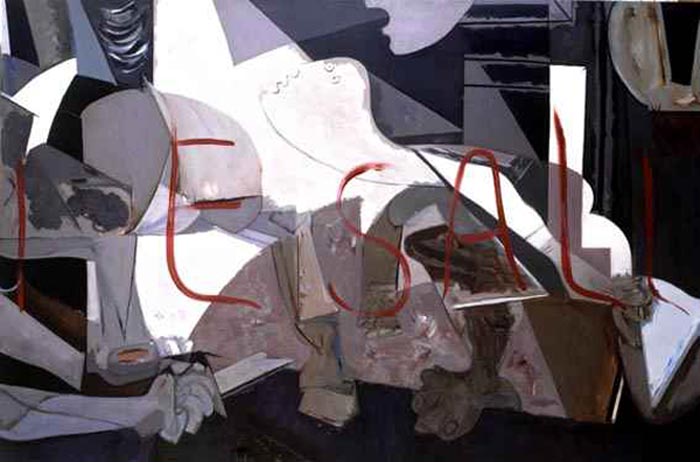 Pablo Picasso once said, ‘for me, an image is the sum of destructions.’ Felix Gmelin, an artist based in Stockholm and Berlin, explores this defining idea from a rather literal angle – in a series of works he made for an exhibition entitled ‘Art Vandals’ which focus on the creative energy latent within acts of revolutionary destruction. Gmelin reproduces artworks that have literally been destroyed in public spaces, including galleries and museums, in order to examine and question traditional notions of history versus what actually constitutes historical truth.

In his painting Kill Lies All After Pablo Picasso (1937) and Tony Shafrazi (1974) (1996), Gmelin reminds viewers of a famous example of art vandalism – the defacement of Picasso’s Guernica by an angry young artist, Tony Shafrazi, now a famous New York art dealer, who spray painted ‘Kill Lies All’ over it in red.

‘I wanted to bring the art absolutely up to date, to retrieve it from art history and give it life. Maybe that’s why the Guernica action remains so difficult to deal with. I tried to trespass beyond that invisible barrier that no one is allowed to cross,’ Shafrazi has explained. The ravages of war depicted in the painting serve as the background for his indicting statement on the contingency of history as it is constructed.

Perhaps Picasso, who once painted over works by Modigliani, would agree with Shafrazi’s point of view, but the art historical establishment certainly doesn’t – the Museum of Modern Art staff quickly removed all the damage from Guernica, essentially updating the act of iconoclasm over another artist’s work themselves. ‘By turning Picasso’s Guernica into a masterpiece’, Gmelin explains, ‘the museum helps to make the picture historic, thereby rendering it invisible in the present.’