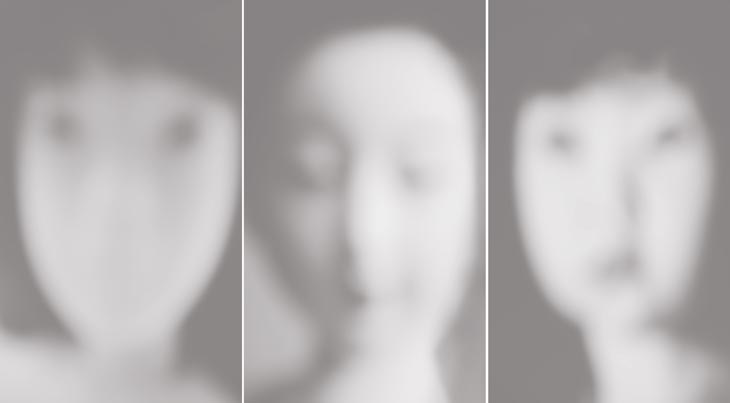 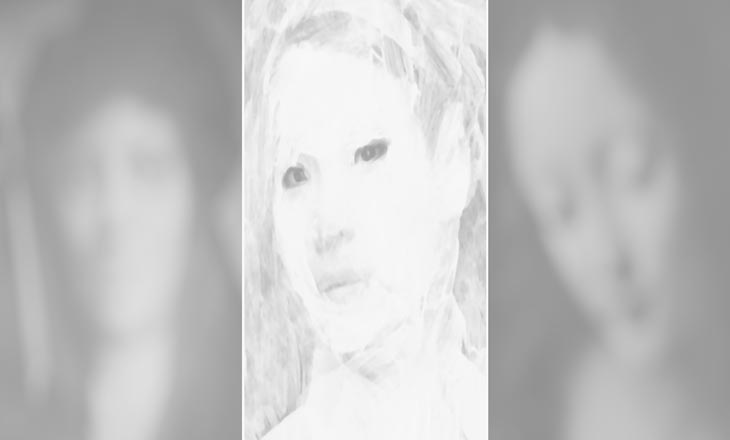 Iraqi artist Halim Al-Karim underwent a harrowing experience during the first Gulf War. Opposing Saddam’s regime and its compulsory military service he took to hiding in the desert, living for almost 3 years in a hole in the ground covered by a pile of rocks. He survived only through the assistance of a Bedouin woman who brought him food and water and taught him about gypsy customs and mysticism. Al-Karim has since emigrated to America, however, these events have had a profound effect on his life and form the basis for his art practice.

In this body of work, Al-Karim presents a series of triptychs, each comprised of three faces. Some are well known figures, such as Saddam Hussein in Hidden Face, others are film stills, artworks, or artifacts. Presented as enlarged panels their distortion is compounded,
raising the question not of what they represent but of their deeper meaning and interconnectivity. Hidden Face was made in 1995, years before the famous photo of Saddam in custody; the figure is in fact made up, based on how Al-Karim imagined the dictator would look in the future. The two flanking out of focus figures are suggestive of world leaders – still in power – whose support of Saddam’s regime has been forgotten. Al-Karim has blurred their identities to show the duplicity of their motives, scripting them as anonymous accomplices who will never stand trial.

In this series of work, photography is used for its non-physical qualities: a medium which quite literally creates an image from light, capturing the transient and interwoven nature of time and
memory. The Sumerian artifacts featured in Al-Karim’s Hidden Prisoner and Hidden Goddess were photographed in the Louvreand the British Museum; Al-Karim describes seeing them internedbehind glass, far away from their home, as a painful reminder ofvisiting his friends and family who were held as political prisonersat Abu Ghraib during Saddam’s regime.

Al-Karim’s Hidden series is a response to the artists own unimaginable experiences and his ongoing observances of the turbulences in his homeland. With pieces titled Hidden War, Hidden Victims, Hidden Witnesses, Al-Karim raises the awareness of not only the devastating effects of violence, but its many manifestations - both physical and psychological – from the political to the economic and domestic. His works adopt a skewed sense of scale and resolve to conceptually shift between the macro and the micro, the societal and individual, physical and emotive, offering a tranquil and meditative pause and space for reflection and catharsis.

Al-Karim merges aspects of Sufism - such as the belief in Divine Unity - with obsolete traditions, especially those of ancient Sumer, the grand empire which ruled in what is now Iraq from 6000-4000 BC. Sumerian symbols often appear in his images, and his photographs of women are in part inspired by a ritual which could elevate girls to the status of goddesses.

Al-Karim’s approach to image-making is as an outward projection of his inner-consciousness and a visual manifestation of spiritual awakening and serenity. His evasive dream-like images evoke a range of instinctual emotive responses, the ability of true perception existing as a preternatural power within each of us, which can be understood and harnessed through the pursuit of metaphysical enlightenment.

In pieces such as Hidden Doll, Al-Karim presents his photographs beneath a tautly stretched layer of white silk fabric that operates as both a physical veil masking the portraits and a metaphorical filter or screen. This ’barrier’ between viewer and image can be conceived as a liminal space, a transcendental portal between being and becoming, where the mystical properties of change take place.

Themes of reconciliation are central to Al-Karim’s work, both emotionally and in relation to Sufi tradition, where faith is inwardly focused and strives for unity between consciousness and God.
Contradictions and juxtapositions occur within his photos, but rather than creating tension, they have harmonious effect. As faces line up: beautiful and garish, monstrous and innocent, wizened and puerile, they form single conglomerate portraits, each segment completing the next, contributing to the understanding of the whole. In Hidden War 2, Al-Karim has covered his images with a transparent layer of cloth, urging the viewer to consider the hidden agendas behind the legitimising rhetoric of those who support the war
×