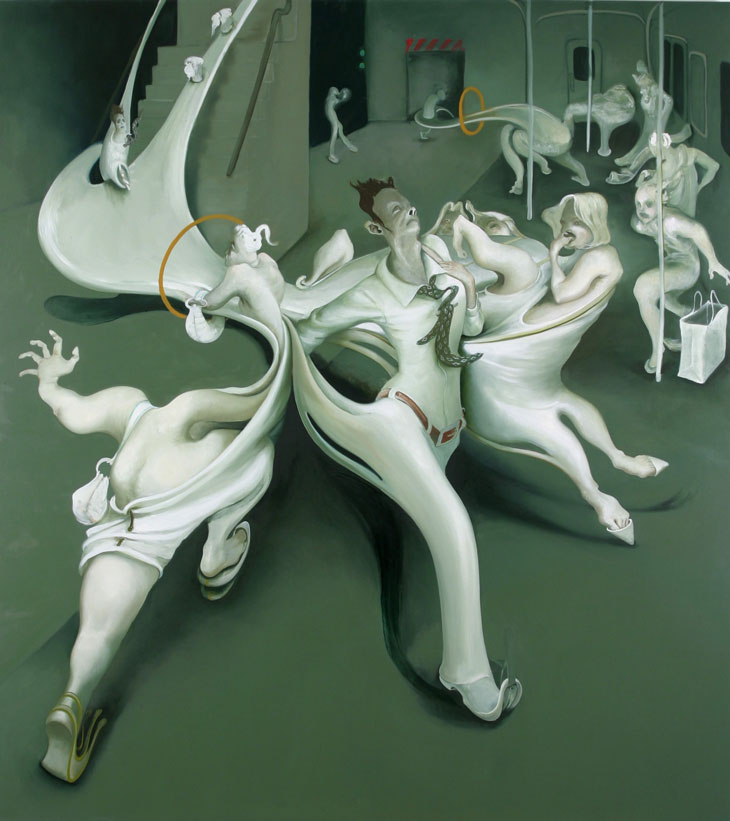 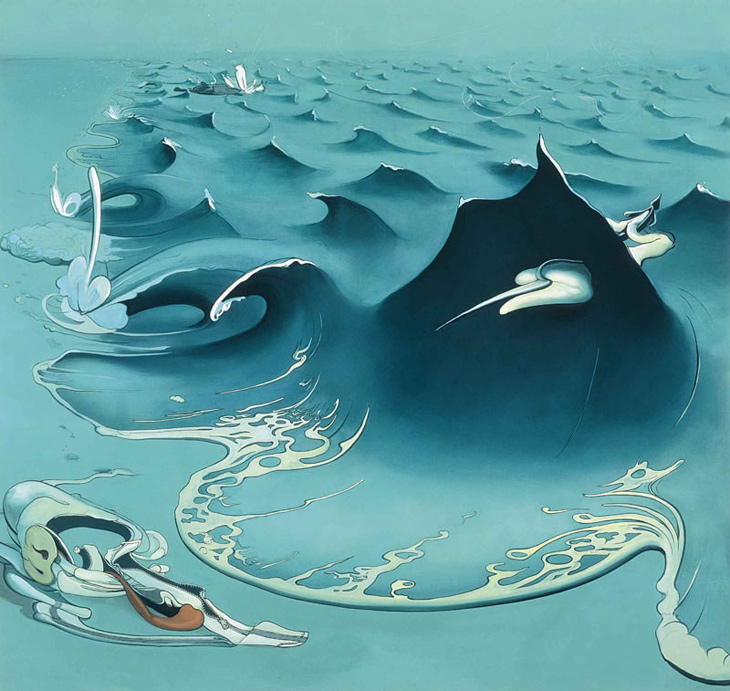 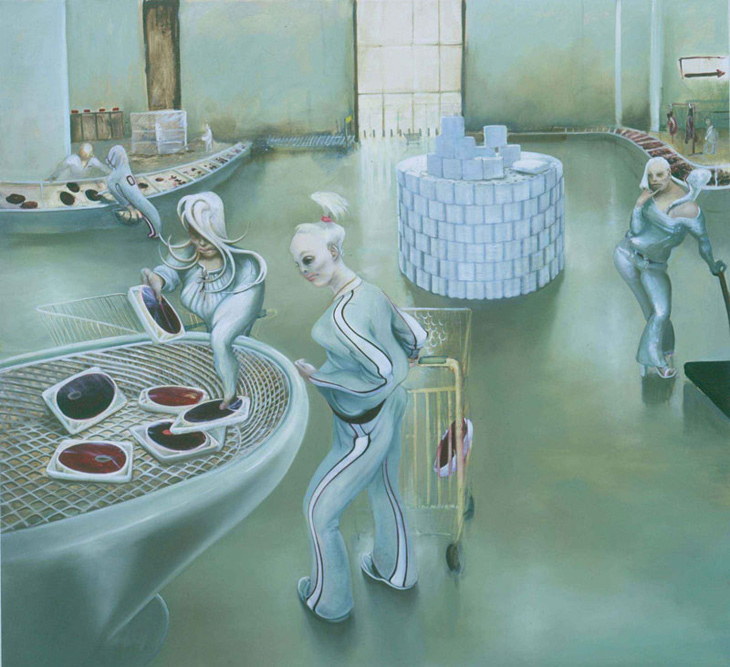 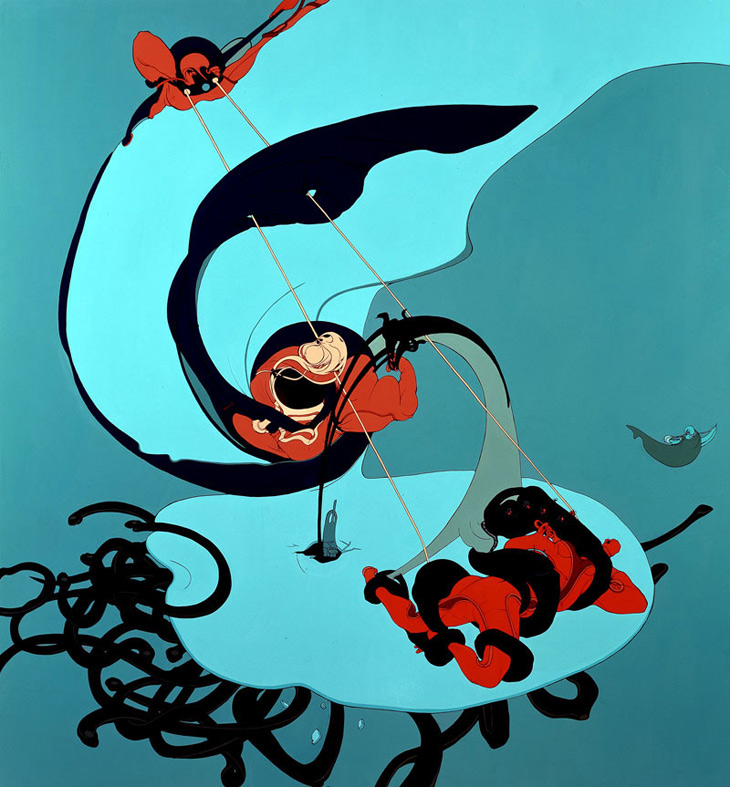 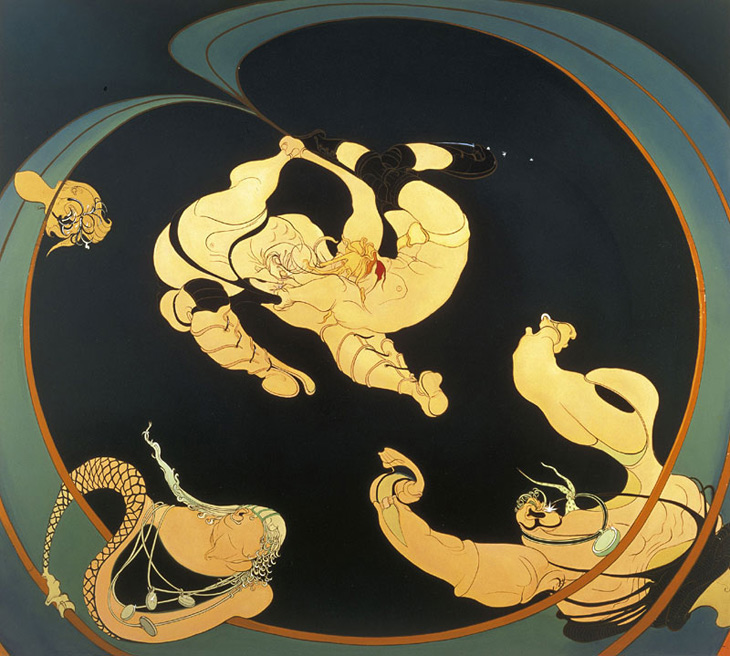 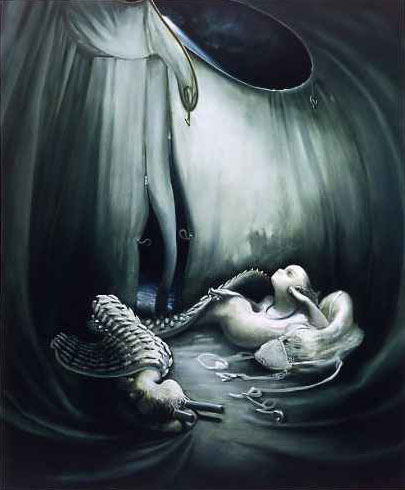 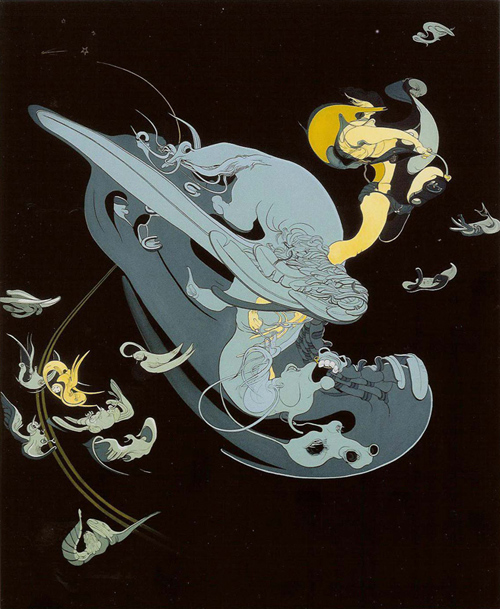 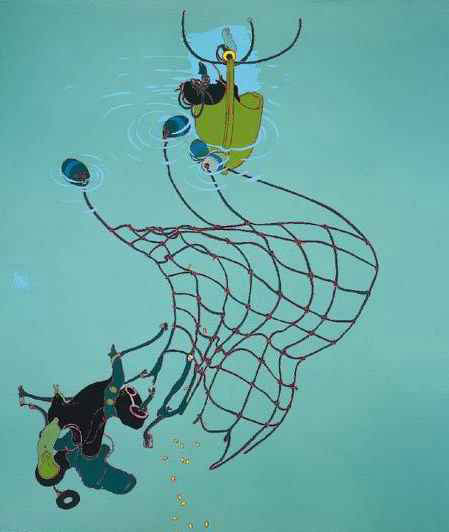 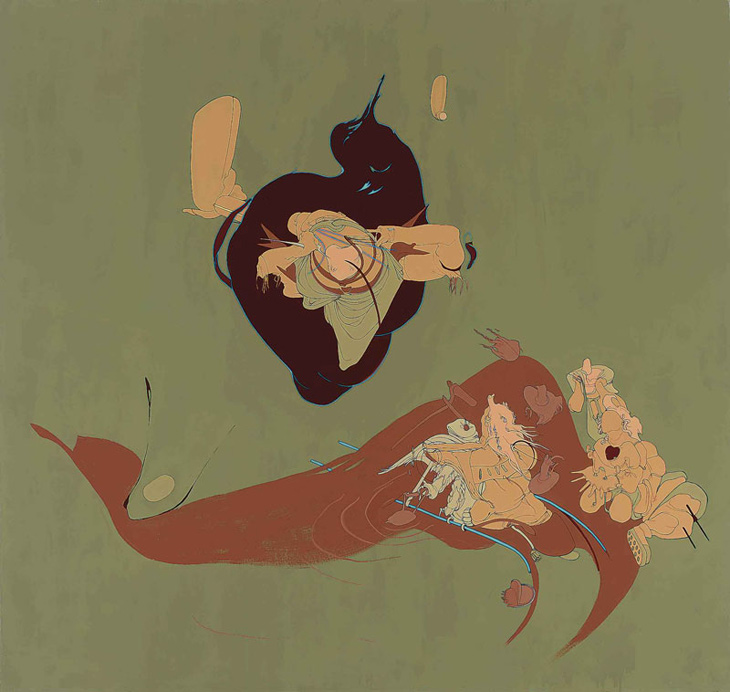 Appropriating the theme of Katsushika Hokusai’s The Great Wave, Inka Essenhigh’s Blue Wave crests with sculptural solidity. Essenhigh deviates from the flat designs and enamel application of her early work. Using oil paint she infuses her scene with manufactured vivacity: this heroic depiction of nature is rendered with the aesthetics of computer animation. Like Hokusai’s woodcut print, Essenhigh uses the stillness of stylised formations to contemplate the drama of a raging seascape. Flaunting their artificiality, the turquoise waves seduce with a certain menace, their razor sharp peaks extending with decorative threat.

"I think about [my paintings] as being about America: fake, fun, pop, violent, but also quite attractive," Inka Essenhigh explains. In Essenhigh’s most recent work, images from suburbia convolute into grotesque dreamscapes; her pastoral scenes of normality belie their true nature as instances of alien horror. In Shopping, Essenhigh readily captures the greed of a chav-land mall with cartoonist’s exaggeration: shell-suited blonds undulate with flirtatious curvature, arms cum tentacles slither for bargain goods. In distorting the scene, Essenhigh draws humorous caricature as well as a heightened sense of plasticity; the women resemble figurines in a themed setting, mannequins illustrating their own insincerity.

Inka Essenhigh translates the subtle qualities of drawing into luxurious paintings. Resonating with exquisite draughtsmanship, Supergod is reminiscent of the design purity of the art deco era. Painting in oil and enamel, Essenhigh uses the cool gloss effect of her media to create a sense of hyper-artificiality: her flat surface possesses a richness of synthetic colour, deceptive in illusion of depth and luminosity. Influenced by 19th century caricatures, oriental art, and contemporary comics, Essenhigh’s paintings are both exotic and operatic: envisioning futuristic mythologies frozen in sublime moments of suspended animation.

Inka Essenhigh’s paintings redefine pop as the epitome of aesthetic hierarchy. Her ultra-slick surfaces operate as virtual fields, where estranged narratives play out in cross-wired systems of reference and recognition. In WWF, Essenhigh draws from romanticised emblems of decadence: the classicism of Greek frescos or the empyreal motifs of Asian lacquer-ware are resembled with futuristic technophilia, made more dynamic in the fantasy realm of cartoon. The god-like figures contort in a stylised motif of aestheticised violence and sexuality. Essenhigh’s highly structured formalism eschews emotional intimacy; line, space, and colour are used to create stunning tension, a baroque beauty that is majestically antiseptic.

In Pup Tent, Inka Essenhigh shifts to a more realistic style with poetic sensitivity, translating her graphic designs into a softly rendered 3D world. Her mythological scene unfolds with the compositional order of her earlier enamel paintings: compacted configurations, affiliated by trailing ephemera, engulfed by a swooping mass of flowing motion. In this new painterly language, Essenhigh gives real tangibility to form: her figure comes to life with porcelain-like delicacy, and the fabric flows with defined texture rather than calligraphied patterns. Trading her factitious palette for gothic monochrome, Essenhigh capitalises on the richness and depth of the medium to create a painting that is elegant and haunting.

Pegasus is a celebration of sinuous, elegant, energetic drawing. Focusing on mythical horses, Essenhigh delights in the curving, twisting lines of their flowing manes and muscular bodies. Like many of the figures in her recent paintings, they seem on the point of bursting out of the image, momentarily stilled in a quivering evocation of throbbing energy and life.