”Calling a painting decorative used to be an insult, but I think it is profoundly radical”.

The subject of Ivan Morley’s A True Tale, 2006, is the personal profit of Peter Biggs, a Los Angeles ex-slave who, during the 19th century, "made a fortune shipping cats to San Francisco to help with their rat problem." Tehachepi, 2006, is based on a Tehachepi Indian family who salvaged bullets out of the sides of trees to get by. Instead of depicting these historical anecdotes as literal accounts, these two works are imbued with the artist’s emotional and psychological responses through his use of dark, heavy colours and hand-stitched cloth. 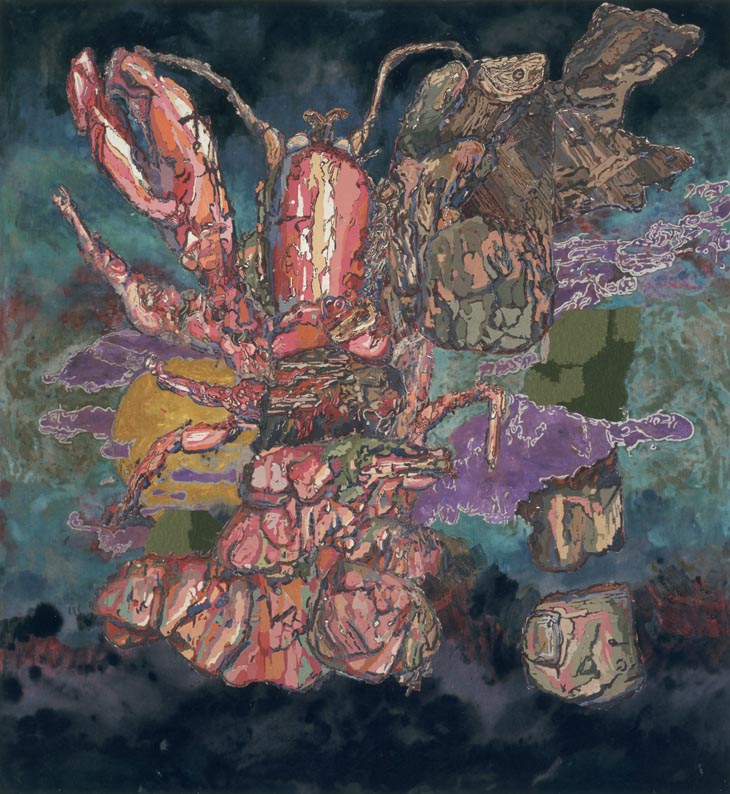 Morley’s choice of craft materials and techniques over traditional paint and canvas was originally a means of disengaging from the shadow of art history. Rather than avoiding subjects and styles that were widely dismissed as art forms he embraced them and found their properties matched the content and 3D presence he wanted to achieve. The act of making a stitch is also important as it represents a specific amount of time, an element that he wanted to make visible and offer to the viewer as an opportunity to trace the artist’s hand and physical experience in the final work. The use of pattern provided Morley a conduit through which to concentrate on instinctive decisions about colours and materials rather than dwell upon the compositional complexities of painting. In addition to these ostensibly conventional works of handicraft, Morley introduced KY Jelly, wax and oils that subvert the cutesy, homespun connotations of the finish. With an unconventional mix of materials and a painterly lyricism to their appearance, his works are not as disconnected from a contemporary painting as they might at first seem.

Morley has expressed an innate interest in the subjects of the American Regionalist movement, such as rural life and their conscious rejection of European modernism, particularly drawing on the work of artists such as Edward Hopper and Grant Wood. In his paintings Morley reflects his own interest in regional history in the form of an emotional response, rejecting the notion that abstract painting should be emptied of reference to reality or narrative.