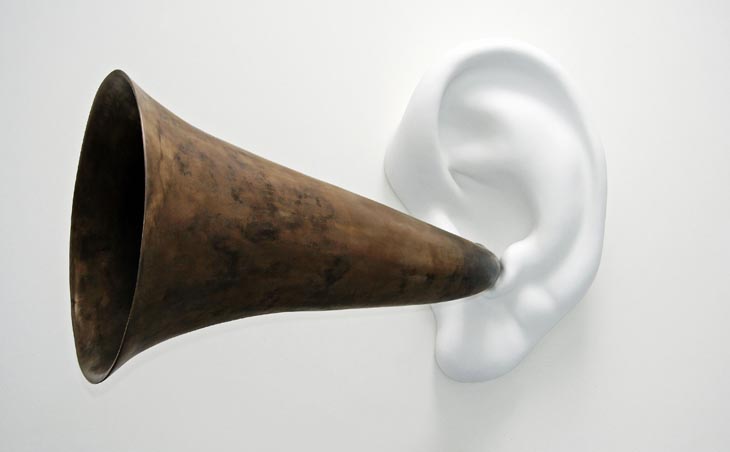 John Baldessari’s practice explores ideas around communication. Some of his signature works are conceptual juxtapositions of text and images that demonstrate the enormous associative power of language in the way that art is interacted with and understood. His works have paired statements with found photographs to humorously exploit the game-like way in which narrative can be arbitrarily created by language and visuals.

Beethoven’s Trumpet (With Ear) Opus # 133 (2007) is a large-scale work about the paradox of communication’s incomplete nature – a sculptural sound piece about a deaf composer. It was one of the artist’s first sculptures. “I was asked to do a retrospective show in 2007 in Bonn with all the works I’d done about music. Bonn is the birthplace of Beethoven and I visited his house and he had a whole cabinet of ear trumpets that he used. I was really fascinated with them as sculptural forms, especially one that he had designed himself that I thought was quite beautiful. And then for maybe four or five years I’ve been doing these works about body parts and I think it started out with noses and ears, so ears were on my mind. And then probably there was one of those three o’clock in the morning moments when you are awake and all of a sudden I thought, ‘wait a minute – ear/ear trumpet’.”

Baldessari’s epiphany and Magritte-like montage of associations creates a piece highlighting how meaning is created through senses beyond the traditionally privileged one, vision – the work is silent until the viewer speaks into the trumpet at which point a section from Beethoven’s six last quartets will be heard.

But if this is Beethoven’s deaf ear, is the meaning of what is said even connected to the sound that will be heard, and what does the randomness of the fragments indicate? The paradox of communication is once again left up to the viewer to resolve.
×