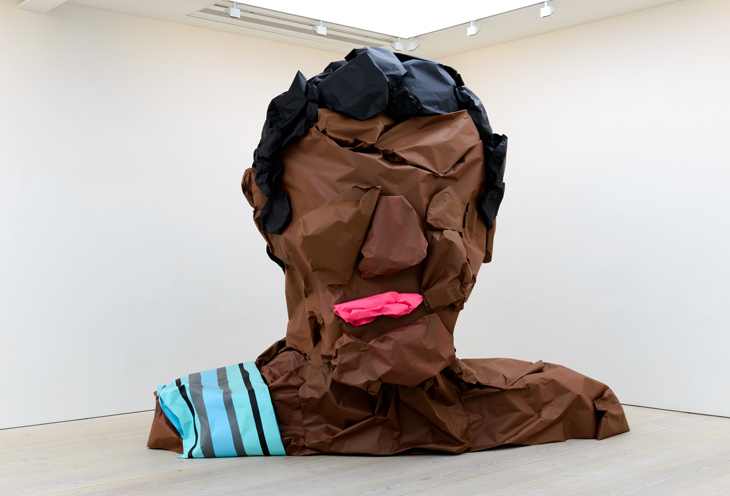 Lerma and Madera, Spanish- born artists who live and work in the USA, are interested in “the minor histories, the B-sides”. On discovering the work of Emanuel Augustus – the recently retired American journeyman boxer, known for his clowning about in the ring – Lerma and Madera decided to honour him with a portrait bust appropriate to such an overlooked yet fascinating figure.
Their initial interest was sparked by his evocative and imperial-sounding name, which made him seem a worthy figure for "a marble bust"; such formalities seemed inappropriate, though, for a man nicknamed The Drunken Master. The work is, instead, composed of coloured paper crumpled around hidden supports, and is comically outsized for a portrait bust, awkwardly dominating the gallery space. Abstracted to the point of near unrecognizability, Emanuel’s face is no likeness; rather, it’s an attempt to capture the chaotic heroism of the man himself.
The paper seems to mimic the swollen forms of punchbags, the head to sway as though reeling from an uppercut. But it’s also a homage to Emanuel himself, not merely a satire. Lerma and Madera have described Emanuel’s unpredictable boxing style as “an aesthetic endeavor, quirkiness and humour over the ‘I’m all business’ attitude of most athletes”. Ultimately, the work is a tribute from two artists to another, a nod to a kindred spirit.