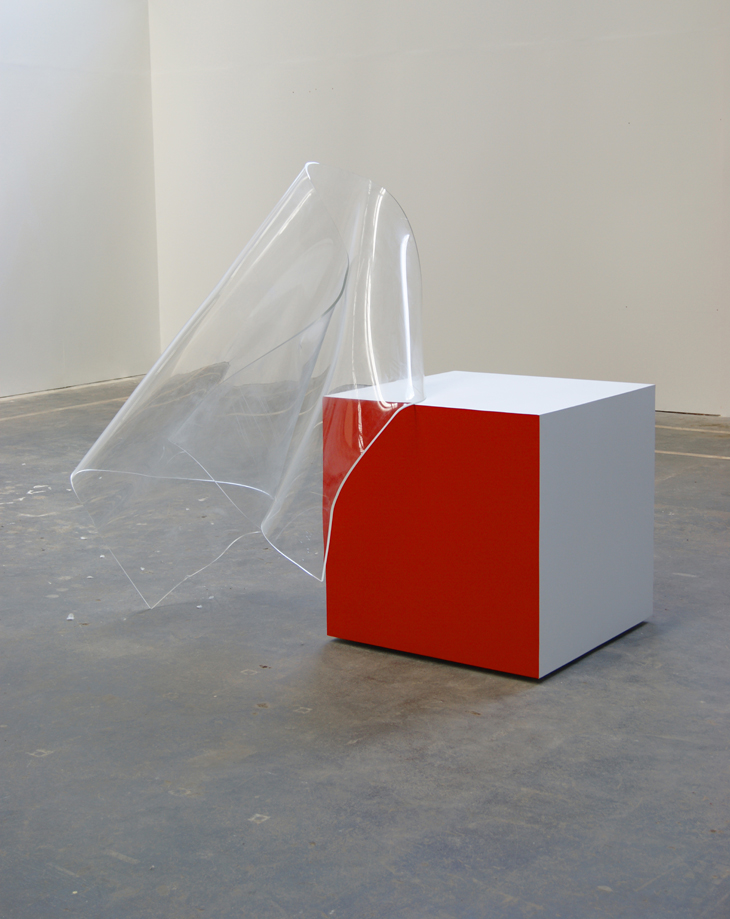 The title of Natasha Peel’s sculpture - The World’s Local Nomad – introduces the sense of internal contradiction at the heart of the artist’s practice. A local nomad might be an accurate description of the paradoxical identity of the contemporary western individual: technology appears to have blurred national boundaries, making nomads of us all; and yet the baggage of national identity – of the local – seems impossible to fully shake. Peel’s work plays out a formal contradiction too. A square plinth, the traditional sculptural support, rests on the gallery floor; a sheet of transparent, folded Perspex, unconstrained by the plinth’s structure, cascades and dances off to the side, one corner touching the floor, like a toe. Peel uses industrial ovens to heat sheets of Perspex until they become malleable, bending them in a way that retains a sense of the body’s traces. The plinth, meanwhile, is coated in coloured vinyl, its flattened aesthetic recalling not only the early twentieth century abstraction of Russian artists like Malevich and Rodchenko (Peel is herself Russian and lives and works in the UK), but also their appropriation in contemporary branding, in what Peel calls “the institutional fate of the avant-garde.” Peel is particularly interested in the writings of Polish sociologist Zygmunt Bauman, whose definition of ‘liquid modernity’ – the fluid and amorphous condition of contemporary society, as opposed to the old certainties of the past – might be embodied in that wave of Perspex, shimmering and disappearing in the light.