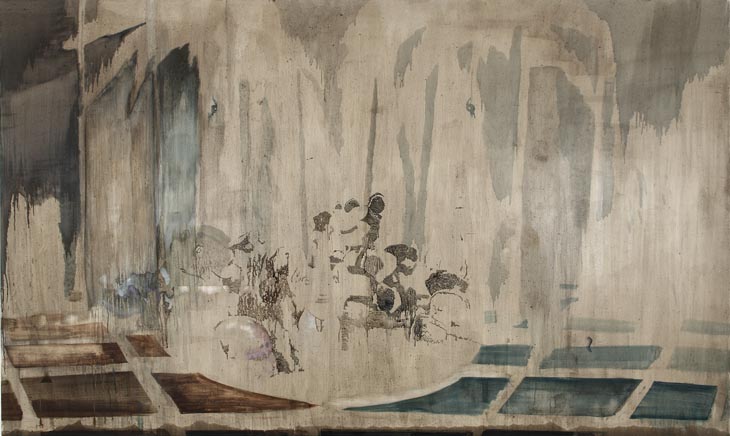 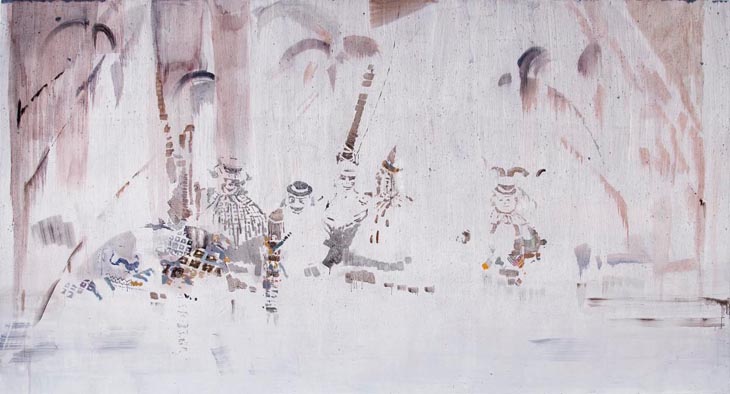 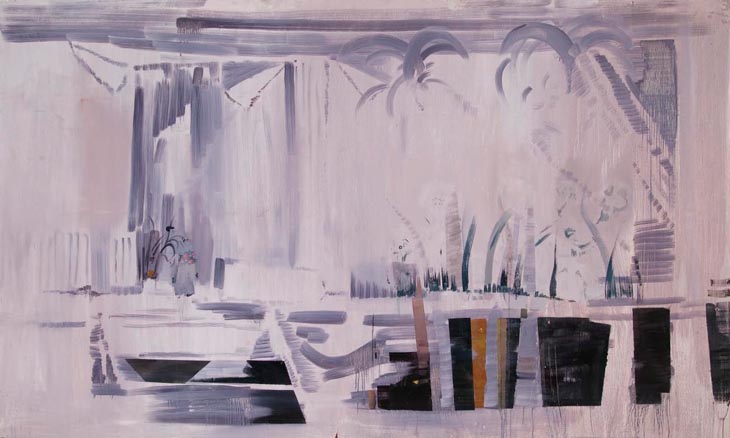 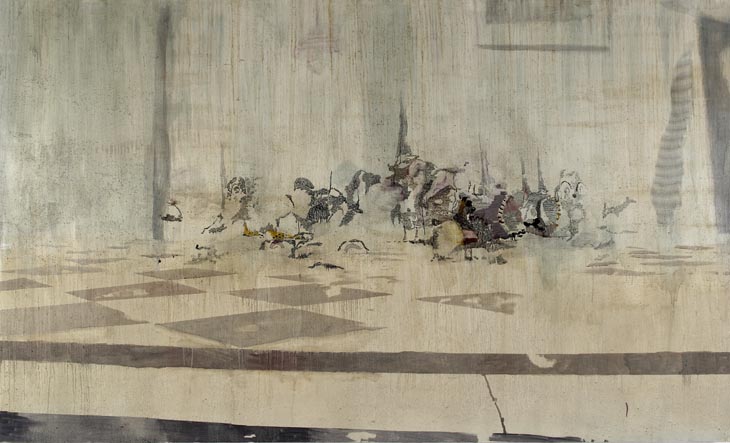 Like oases that shimmer promisingly in the distance Nick Goss’s scenes deny concrete resolution, existing instead on the fringes of memory and imagination. Deception of scale is important to Goss’s work: conveying the sensitivity of aggrandised watercolours, his canvases create a sense of disorientation, as if their infinite expanse might be an illusion, painted from miniature sets. This fragility resounds throughout Goss’s canvases as a metaphor for the theme of man against nature; each of his motifs suggests relics of a built environment, abandoned, overgrown, and decayed. In The Near And Elsewhere, Goss renders a piazza and monument in a jungle, disintegrating eerily in sepia tones. The faint image of the Mickey Mouse statue in the centre of the painting is from a photograph Goss took at a fairground deep within Bolivia’s Amazon Forest.

Embodying a literary magical realism, Goss’s paintings allude to a placeless-ness and timelessness, a parallel world of mystical wonder. Calenture Fostic draws from America’s pioneer beginnings. The urban Europeans who settled the vast prairie wilderness were often overcome by a sickness or syndrome from the oppression of too much space; the word ‘calenture’ refers to a tropical illness or heat exhaustion. The carnival-esque figures looming like ghosts were inspired by a vintage photograph of a wandering circus troupe Goss found in a junk shop in California. Goss emulates a sensation of delirium in this otherworldly scene. As if overlaying one history with another, veneers of delicate washes are punctuated by dense impasto detailing, an effect that replicates the faded quality of old photographs and suggests a haunting presence.

‘Lacuna’ is a term for a gap or a long pause, and in this painting Goss construes this idea of tension through formal elements. Goss develops his compositions from photographic collages, which he makes from his own snapshots and found images. These ‘sketches’ are often absurdly surreal, combining out of scale arrangements of unrelated objects: his studio floor might double as a desert, or a birdcage for a building. He then makes watercolour studies of these before beginning his canvases. This process allows for a slippage in translation, where his time-worn subjects become reduced and distorted through multiple interpretations – the end result bears little resemblance to the original source. In Lacuna, Goss heightens this sense of disjointedness using contradictory styles and textures. The thick geometric patterns that comprise the pool are the most concrete element of the image, while the landscape itself melts away in ephemeral gestures, lost to its own abstracted reflection.

In Domino Foyer, Goss’s harlequin patterned terrain gives an air of grandeur to his deteriorating scene. The obscure angle of its vantage point places the viewer as a vulnerable witness to a carnival-esque wreck that appears to be both growing out of and collapsing into the backdrop. The ‘landscape’, which originated as a photograph of the artist’s kitchen taken with the camera positioned on the floor, becomes a duplicitous setting that confuses interior and exterior space. This idea of inbetween-ness – the intervention of the epic and intimate, psychological and physical, past and future – is echoed in the canvas’s surface through Goss’s painting technique. His planes of dreary colour, erased and eroded, become an unstable ground, where brush strokes defy gravity and float as independent manifestations. Minute details are rendered with crystalline effect, their intensity heighted by a craquelure pixilation that connotes virtual reality.
×