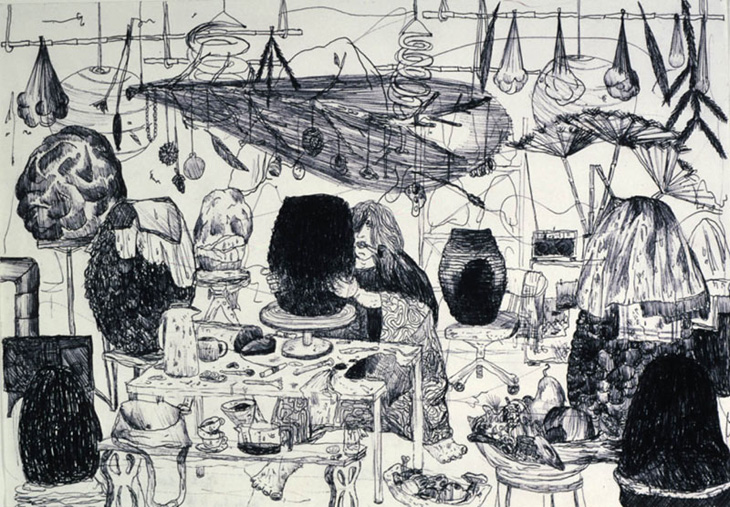 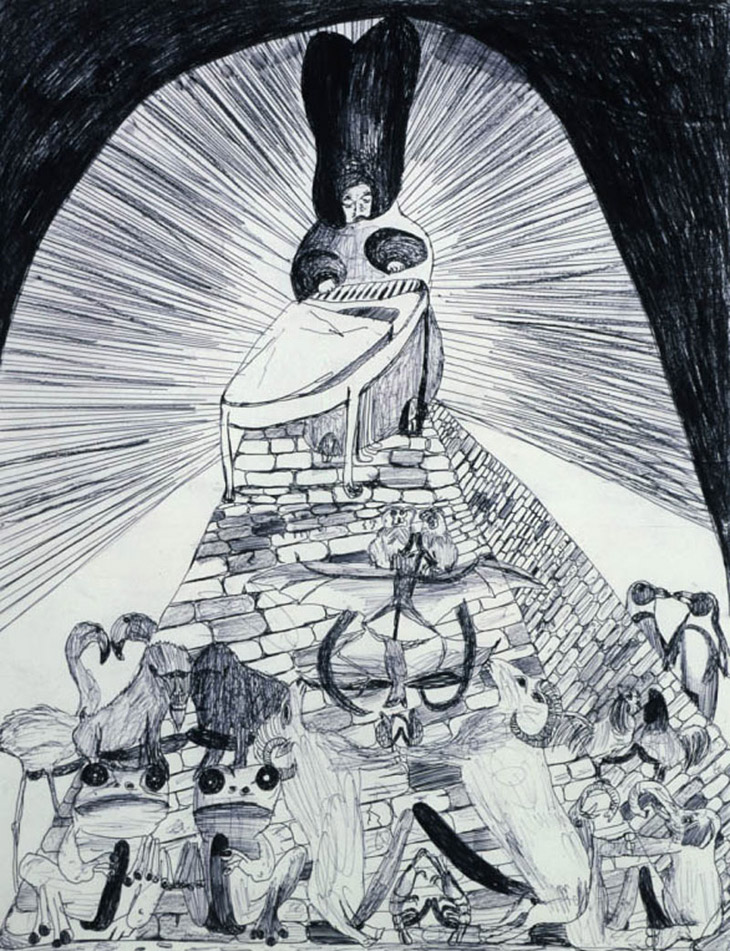 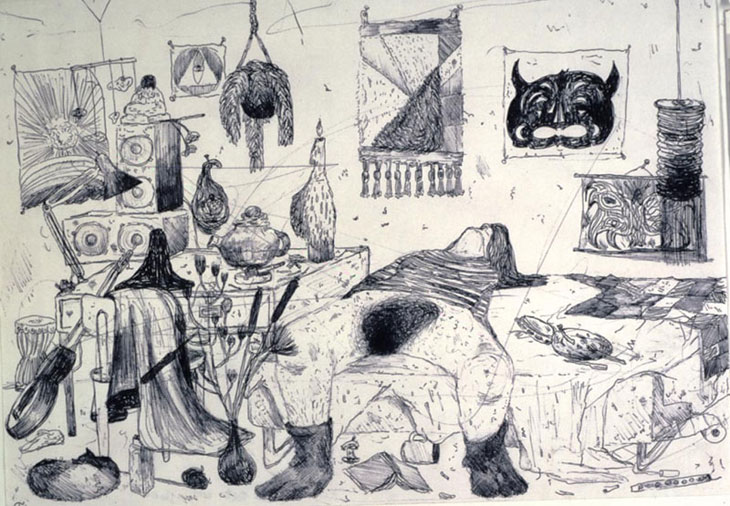 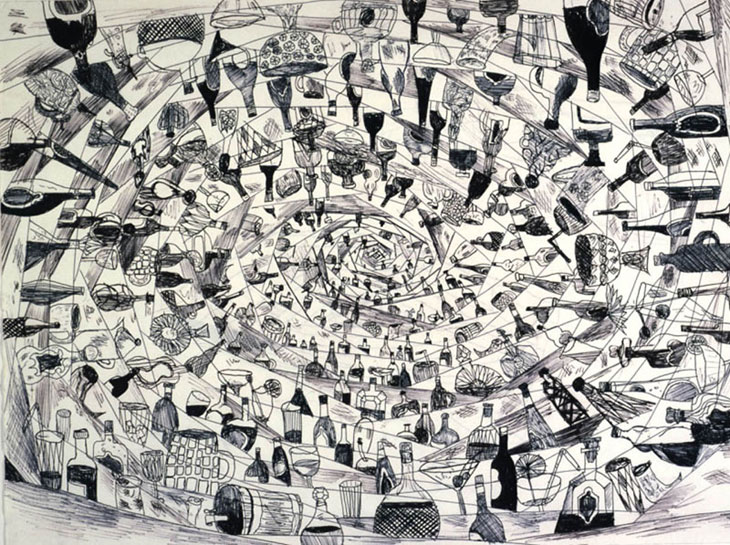 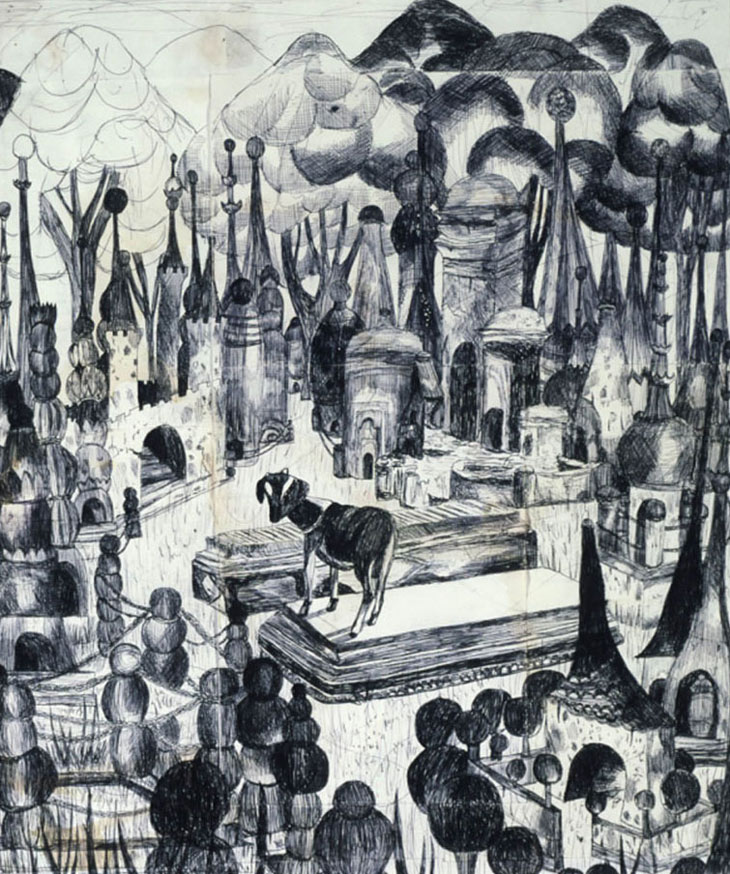 In Birth of Figure, Tal R humorously depicts his process of artistic creation. Drawing tongue-in-cheek reference to Courbet’s L’Origine du Monde, Tal R’s earth mother is the opposite of sexual: simply a giant pair of cartoon-ish legs, she perversely spurts out one masterpiece after the next. Surrounded by the grotesque totems of her making, they dumbly stare in bleak confrontation. The chequered pattern of the bed suggests the conceptual stratagem of chess.

Tal R’s Birth of Laughing Chinaman is a pastiche of visual imagery; the construction of this piece is as incongruous as an out of time lip-sync. Tal R’s cartoon-ish drawing obeys no discernable logic. The room, in disjointed perspective, becomes a depository for random items of Tal R’s invention: 60’s furniture, a ship in a bottle, shrunken heads and voodoo sculptures. Revelling in absurdity, Tal R creates this image simply to will its existence. Collaged elements, such as the film projector and spider web, serve to further distort the sense of space, their applied shapes contribute to the jumbled disorder.

Tal R merges the stylised primitivism of the avant-garde with his own contemporary lexicon of suburban culture. Inspired by the psychedelia of 60’s album covers, Tal R’s Cream 13 portrays all the accoutrements of rock and roll sin with a ham-fisted approximation of Picasso. Use of low art materials, such as biro pen and cut and paste, lends a degenerate feel to this high art reference, trapping the drawing between teenage doodle and masterpiece.

Depicting an artist’s studio, Tal R’s Inside Out seizes on the clichéd perceptions of creative value. Clad in tie-dyed muumuu, surrounded by rows of dried flowers, and ugly muddy pots, Tal R portrays his sculptress as a new age bohemian. These ethics of communal harmony and individual expression are prized above all else in Tal R’s work. His art is made of everyday experience and materials, his contribution construed as generosity of vision.

In this tribute to very large hairstyles, Tal R elaborates on the obsessive patterning which is predominant throughout his work. Psykologi Canit Dance shows Tal R at his most refined. Drawn entirely in ballpoint pen, his women are like flowers in window displays, gaining an unlikely fragile elegance, beautifully embossed into the smooth surface of the paper.

Tal R’s drawings of teenage bedrooms are infused with awkward embarrassment; the secure dens of iniquity, of immature fantasy, and unfulfilled lust. Crammed with overwhelming information, Tal R delights in drawing the ephemera of adolescent identity crisis: Japanese lanterns, slickly ferns, tattered bongos and head-shop posters, the trade fare of rebellious fashion. Tal R captures this child/adult inbetweeness at its most vulnerable moment: pants down, Shamotte is both funny and cringe-worthy.

Tal R uses vortex compositions repetitively in his work, as seen in paintings such as Melody and Fungusia. In his drawing Spiral Bar, Tal R pushes this design to the extreme. Like an alcoholic’s fantasy of the ultimate cocktail lounge Spiral Bar spins out of control in dizzying delight. Tal R’s drawing is a time consuming process: the web of lines has been ruled, and shading added to create the illusion of sculptural depth. Painstaking detail places Spiral Bar as an endeavour of addictive compulsion.

Tal R sees his paintings as a form of storytelling. His drawings and paintings adopt a playful sophistication; in their faux innocence they present the everyday world infused with wonder. In The Boots, Tal R takes pleasure in rendering the clichéd clutter of an adolescent bedroom: cobra poster and druggie candles strive to stamp their identity over the mum and dad homeliness of potted plants and knickknacks. Tucked away in this nasty lair, Tal R’s figure takes particular pleasure in his outlandish footwear.

Tal R’s drawings operate like highly rendered versions of the places his paintings might represent; half way between realism and its total corruption via the artist’s imagination. Favoured motifs reoccur in different form, and recognisable imagery transforms into clunky geometry. In Tranquebar Tal R draws a scene of gothic fairytale proportion; his mystical village with wandering goat bears striking resemblance to a Mediterranean cemetery. The fragmented ground, made of collaged patches of paper, underscores this shifting illusion.