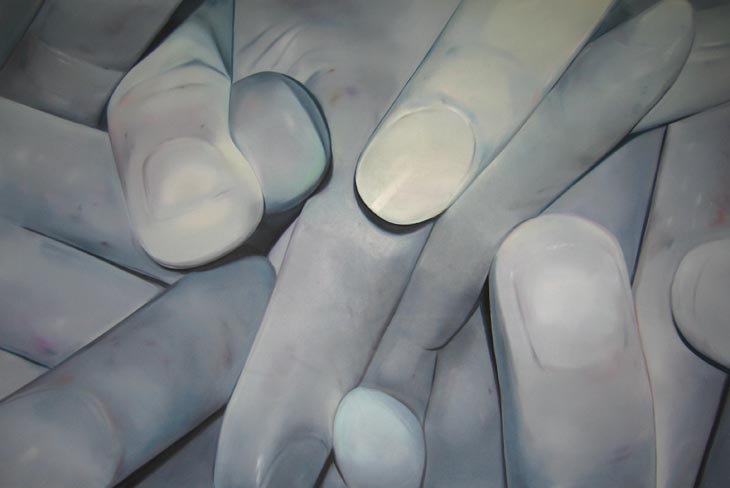 For Yin Zhaohui, photography is synonymous with consumer culture: its representation supplants the ‘real’ with an economy of image-ideals, establishing a ‘normalcy’ of perception based on degeneration and distance. Working from photographs rather than from life models, Yin appropriates photography’s mechanical aesthetics to emphasise and heighten this estrangement. In his paintings of the body, Yin concentrates on distinctly human features -- such as the hands and face -- to disrupt this system of expectation. Devices such as greyscale palette, forced lighting effects, and areas of intensified or diffused focus reinforce an unnatural perception of these intimate details, creating a jarring sense of the uncanny.

Rendered with clinical austerity, Yin’s Untitled, on first glance, appears as an abstraction of cylindrical forms - like an Escher-esque pile of sausages - implausibly entwined, weirdly seductive and repulsive with their organic suggestion. The image is of course, a large ’close up’ of hands. Inspired by John Coplan’s Self Portrait Fingers, a series of work where Coplan photographed his own hands in a variety of sexually evocative positions, Yin’s paintings construe the intrinsically human as something alien and dead. Yin executes this painting with a slick pop veneer, framing his inanimate appendages in the language of commodity fetishism.
×