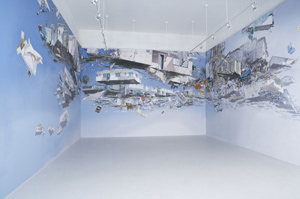 Adam Cvijanovic
Love Poem (10 minutes after the end of gravity)

flashe and house paint on tyvek

14ft x 75ft
Drawing inspiration from Renaissance fresco painting, Adam Cvijanovic’s ‘portable murals’ depict contemporary landscapes with a sense of celestial awe. Spanning 75 feet, Cvijanovic’s Love Poem captures the dreamy and disquieting essence of suburban Americana as a rapturous science fiction tableau. Envisioning sun-bleached L.A. ten minutes after the end of gravity, Cvijanovic’s utopia ascends in a whirlwind of consumerist ecstasy. Emulating movie backdrops as well as the acclivous perspective of cathedral dome tromp l’oiels, Love Poem… combines the sublime horror of disaster films with a majestic religiosity, as bungalows, Broncos, and palm trees are destroyed in the exaltation of their own perfectness. Painted entirely by the artist without assistants, on a plastic used by Fed Ex, Cvijavovic’s work reconstitutes the intimacy of timeless artistry with a modern day immediacy. 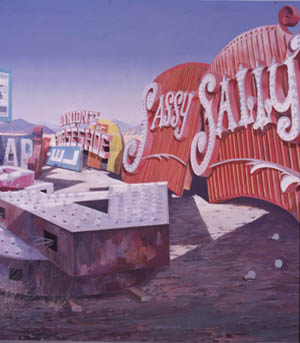 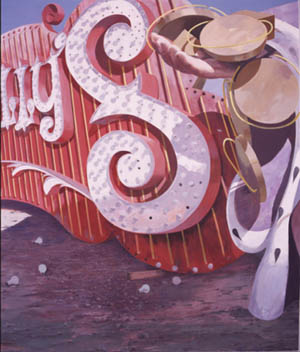 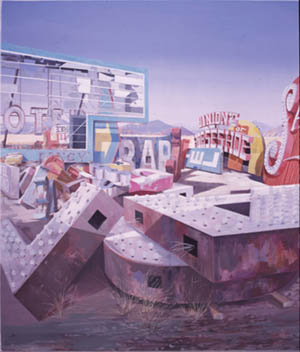 Flashe and latex on tyvek

Stemming from his former job as a commercial muralist, Adam Cvijanovic’s paintings combine pop kitsch with the gravitas of historical painting. Completely self-taught, Cvijanovic approaches painting with an unconventional process: using a variety of acrylic and latex household paints on Tyvek, his vast images become transportable frescoes, giant architectural interventions that can be remodelled to fit various gallery spaces. Subverting the utopian connotations of monumental painting, Cvijanivic’s tableaux embrace the serene and idyllic while portraying haunting scenes of desolation.

artnet.com
Philadelphia Story by Roberta Fallon
Adam Cvijanovic, who has been exhibiting since the mid-1980s and is now represented by Bellwether Gallery in Brooklyn, is gaining increasing praise for large-scale, deftly done illustrational landscapes and other scenes, ranging from cowboys in the West to a beach thronged with young people (he was also featured in the traveling "On the Wall" exhibition organized last year by RISD Museum's Judith Tannenbaum).

hammer.ucla.edu
Adam Cvijanovic by Steven Vincent
Although many words can describe glaciersâ€”magnificent, desolate, pristineâ€”ambiguous is not one of them. Trillions of tons of frozen water massed in continent-size sheets grinding over 10 percent of the earthâ€™s surface tend to resist interpretation and relativistic philosophizing. Like all forces of nature, they demand acceptance on their own terms. Glaciers, in short, are just thatâ€”glaciers.

villagevoice.com
Off the Wall: An Extreme Painter Lays It Out by Kim Levin
Adam Cvijanovic, who has been rolling with the punches ever since the latest crop of MFAs were toddlers. "He is so cool. He's the John Travolta of the art world. His reinvention of himself is awesome," says Becky Smith, proprietor of Bellwether, whose walls will host two of his hand-painted wallpaper murals in May.

citypaper.net
Putting It in Perspective by Robin Rice
Adam Cvijanovic's mural depicts the MOVE tragedy from a whole new vantage point by Robin Rice.
Cvijanovic has attempted to expand the meaning of this work by relating it to one of Edward Hicks' Peaceable Kingdom paintings, displayed on an easily overlooked wall outside the gallery, and to images of Osage on fire.