REMARKS: Another American obsession, another distraction, another perverse entertainment, "Decaf Mochachino" found at Level 3. God forgive us for what we have done to each other. They used to say He is
the way. Which way to the Way? God left this place a long time ago. Anybody else?"
-Hey zombie why are you so doom and gloomy?
-You think I am the devil but only because I lived in hell. I want out. This place is about to explode. Now that I’m Fat, balding and older things are different, I want to spend my time with someone nice. My bodily dysfunctions? Anybody for? Going once? For? And garbage? The great romantic depot for the greatest romantic despot" What makes him sad is what makes him want. We’re all characters of a grand plot who struggle under strongly opposing desires. We seek a new beginning, a renewal. I am preparing myself for the coming take over and I am rearing up on my... Bing Bling Bang Bling Big Bing Bang Bing (decoy) 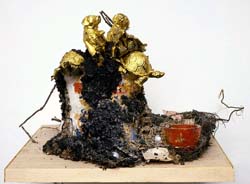 REMARKS: This first discovery was found like much of the others in and under Chatham Square. It was dug out at 4 feet, which for our sake will be Level 2 as opposed to Level 1 which deals with ground level, and Level 3 which deals with digs from 5 to 10 feet deep and ultimately, Level 4 which spans below 10 feet and up to 15 feet underground. This first "leftover" as we like to call them is named "Hare Jordan", and so
for the obvious lack, although strong suggestion of the presence of a hare. It deals with air, with reaching for air, for life…and if for life then deals with a lot more. What ever happened to science fiction?
Just add a few what ifs and it all becomes way to real, and then you find yourself as if frozen in time and space, as in a Pompei like setup with a lava like substance where all freezes in that last action, that
last gasp and all gets rooted, part of the roots. What happened was clearly established, we were waiting for a finisher, a messiah, it had all been foretold, but it all came too fast. Open your veins it’s quicker, and with your blood you renew the world from age to age. The hare did run faster. He probably had to, to be up for his sucky job at 6 am. 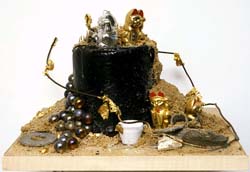 REMARKS: The second was dug out a little deeper than the last at about 6feet under or at Level 3, still around what would be Chatham Square. It is named "Hello Kitty" for the undeniable presence of many waving cats. For the Chinese and the followers of their fate and/or superstition these cats stand as lucky charms, as protectors and guarantors of a wish, probably that of financial security, as they are most often than not found at the entrance of businesses and more particularly very close to cash registers. There is no business like the one of money and luck. It follows the laws of supply and demand, but there are always more customers than actual products. What is it really? A substance of value? A value of substance? For all that died for the sake of gold, in all its shapes, for all the ones who survived, money always comes with a price. What the worth? What’s the worth of an individual? There is no business. There is income. What do you do for a living? 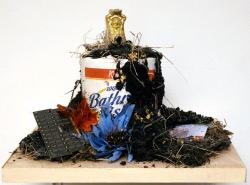 REMARKS: This leftover is dedicated to "Lily", more women, more modern, more sacrifice and eventually more redemption. Because life had decided, had developed in a way where we could be together and it felt
like we should. Muse or Excuse. Beautiful in any country, she had walked up to me and said "Somehow, you don’t strike me as the innocent type, you’d think I hadn’t met people like you before. I smell you, killing is a way of life". As if. I had never even addressed her. Let’s get "tabloid", with the face of an angel, the body of a seductress, the eyes of the devil we can be sure that she’ll be around for years to come. O. She had posed nude for a tasteful Marilyn Monroe like spread. She even got to participate in steamy hot sex scene with the secret agent. Neither dress, nor manners fooled her in the least. She got married, divorced
and then dated a tobacco executive. That’s when she became eager to show off her softer more mature look. And although you may not recognize her name, she had one of those faces that is almost impossible to forget. At any rate a profound impression. Accordingly the reader assumes full responsibility for the use of the materials contained herein. Why? Why not? Just another unguided forum. Blinders. It’s sadness first and then offered relief. How does it feel? We’re not children anymore. The Brat is dead. People should get a permit to have children. One day all children realize that all parents are weak, that they should just pull
the trigger. When all they should have said was we won’t let any other go, we don’t want to lose you just yet, maybe I just give a fuck. Do you really only grow up the day you kill someone? 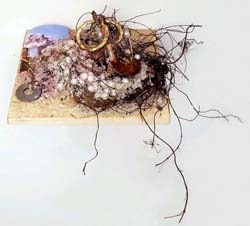 REMARKS: This next chance creation is named Pearl River, found at Level 4. It somehow retained its innocence, like a souvenir. I like pale hues. It’s very feminine. It says I am here for lack of a better idea;
too elusive to be a movement but a moment, definitely. A moment can give meaning to a life, to a lie. We see her take back the ownership of her body image, hard work, determination and a killer body. You can
only sabotage your feminist ethics for so long. Well, Hello officer, how can I help you today? You’re looking for genuine love. Sorry no I haven’t seen any lately. But do come back at some other time, you might get lucky. When the world as you know it is over and you happened to be one of the sole survivors isn’t it so nice to talk shit about somebody else… 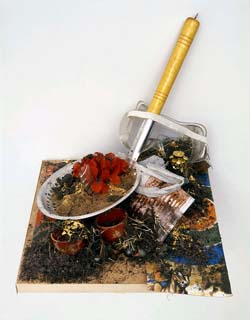 "Right on Target" found at Level 2 under a shopping center on Division Street is proof that American history continues. Just like an old reliable obsession, America plans to extend her brood. Her self-proclaimed disdain for monogamy makes her an interesting little catch, a life long virus, physically debilitating, chemically altering. She’s running in and out of hospitals treating exhaustion and
appendicitis. REAL estate opportunities. The goddess of the scaffold shows no mercy. We save the government and that’s how they show their gratitude. There are no slaves and masters here. It’s cut throat. No hands. No vote. Let’s go far right. Who’s gonna cast the first stone? 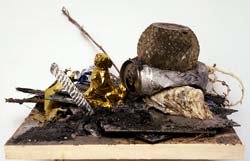 REMARKS: "Successful Hunt" was found at Level 1 near Wall Street. At the cultural level there is only one such feat, and it’s an idea not an object. It reminds me of the elusive nature of words, wording and calling Words like rude, bitch, anger with angel wings or worse for better or for worse. For better or for words. I should have known better. (Laugh) Humor is the universal language. It lies in style. 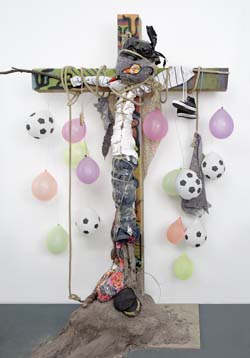 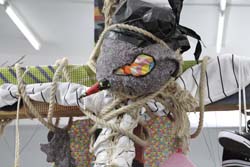 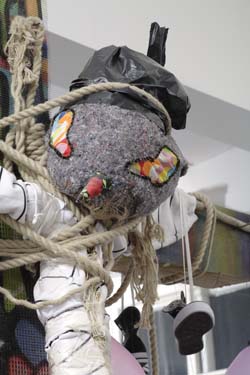 New Yorker Agathe Snow’s approach to art is more a way of life than a studio practice, informed by personal circumstance, travel, current events, counter-culture, and a drive to engage with and stamp her imprint on the world at large. Often using objects she’s found on the street her sculptures reconfigure the detritus of everyday life as deliriously apocalyptic monuments of societal breakdown. In Three (Cross With Balloons), Snow’s crucified effigy towers with effete comic horror. Mounted in mud, wrapped in cling film, and bound with a noose, her suburban victim is adorned, adulated and ridiculed with party hat and balloons, a pair of Converse All- Stars dangling from its death rood like a public notice of crime committed. 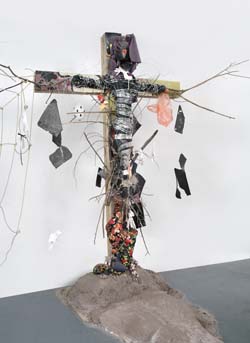 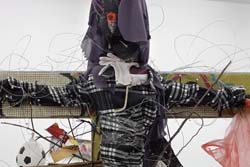 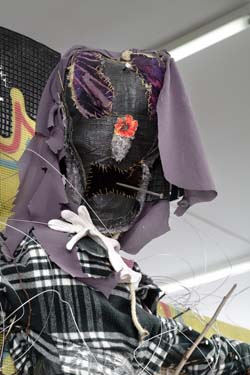 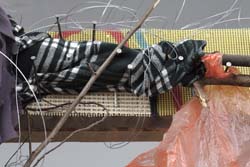 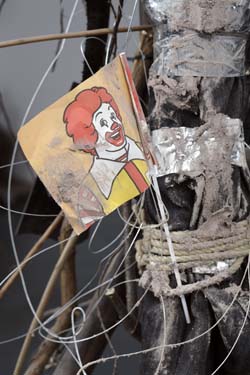 Snow explains this series of work as being about “cartooning archetypes of power that I hated, with Mother Nature on my side”. Drawing together a wide variety of reference points – from
consumer culture to Renaissance painting – Snow’s Four (Center Cross) humorously poses as a contemporary St. Sebastian, a stick-riddled martyr of modern decadence. Nailed to a graffitied
crucifix, conveying a medieval jubilee at the display of enemy corpses, Four (Center Cross) is a triumph of loathing and decay, its battered shopping bag and McDonald’s flag denoting a member of the foe camp. 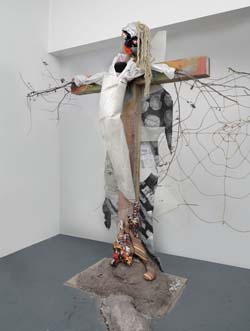 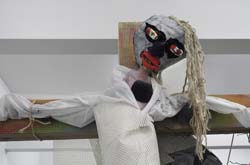 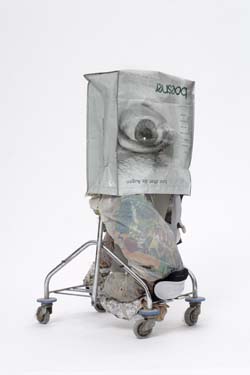 Agathe Snow
Five (Cross On The Left With Spider Web)

Within Snow’s work is the intrinsic value of creative methodology and material negotiation, the infusion of her idiosyncratic interpretation and belief into the structures she assembles. The making of Snow’s sculptures is an intensely physical process, and for this series of work she created each piece in the gallery where it was originally exhibited, inhabiting the space for the duration of the show. This performative dimension of her work is evidenced in the finished pieces, such as Five (Cross On The Left With Spider Web), which expose her modes of assemblage, spontaneous decision making, and playful innovation, transforming simple objects
such as used clothing and twigs into totems of artistic creation and fictionalised degeneracy. 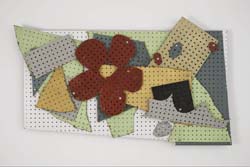 What kind of artist are you?

I make, like, environments with food. I make food, I deliver it. I move from people's houses to galleries and museums with food.

But you're not a chef or a caterer?

It's like this: I live on the Lower East Side, and I just came back from Amsterdam, where I did this thing at De Appel Museum-an ode to Kurt Cobain. It was a collaboration with some Japanese artists. They were doing music and projections, so I made food. Oh, I was also wearing a wedding dress. I had white lilies and candles everywhere, so it was an environment. It's called "Feed the Troops."

How did you come up with that name?

I have a lot of really amazing people around me, an army of the creative and beautiful, the super-talented and strong. I also design clothes.

Are you wearing anything you designed today?

No. I'm wearing an old Mexican embroidered dress. It was my great-grandmother's. The coat is some designer, I don't know who-it was given to me by my mom. The hood-that's from SSUR Plus, on Spring Street. The boots are my friend Anna's. I think she got them in Sweden.

What kind of clothes do you design?

It's very casual stuff, men and women. We dye and treat T-shirts, and I make all the artwork. There are ponchos and capes. There are dresses.

How would you describe your overall aesthetic?

I'm like a modern-day gypsy. It's just a moving and all-inclusive thing. And it's very political.

Well, right now, I'm kind of freaked out about the whole Bush story. I realized while I was in Amsterdam that he had been elected, so I did a lot of political stuff. I made Saddam Hussein and Osama shirts that are punk-inspired. It's all a collage, basically. I think his reelection will just create an underground movement that will be more fun, and I will get inspired.

Is there anything mainstream that you like?
I just broke up with a boy who was really into mainstream stuff. I learned about bands like Pearl Jam from him. I've been with such extremists my whole life, it was nice. I forgot that people could be normal.