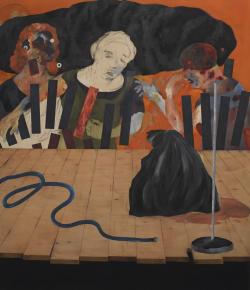 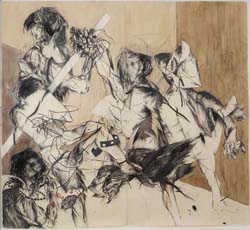 Ahmed Alsoudani
We Die Out of Hand

Charcoal, pastel and acrylic on paper

274.3 x 243.8 cm
During the first Gulf War, Ahmed Alsoudani fled to Syria before claiming asylum in America. Through his paintings and drawings he approaches the subject of war through aesthetics. Citing great artists of the past such as Goya and George Grosz whose work has become the lasting consciousness of the atrocities of the 19th and 20th centuries, Alsoudani’s inspiration comes directly from his own experiences as a child, as well as his concerns over contemporary global conflicts. In We Die Out Of Hand, the earthy background sets the stage for dreary prison gloom, while hooded figures are obliterated through mercilessly violent gestures, insinuating the horrors of Abu Ghraib or Guantanamo Bay with exquisite and torturous beauty. 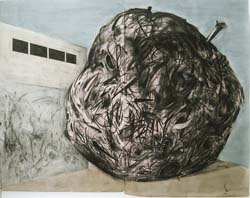 Ahmed Alsoudani
You No Longer Have Hands

Charcoal, pastel and acrylic on paper

Alsoudani executes his works with a raw physicality, using materials such as paint and charcoal in an unorthodox way, often painting over drawing and vice versa. You No Longer Have Hands is spread over two large pieces of paper, the seam down the middle operating literally as a divide. Like many of Alsoudani’s images, there are no people in this work, rather the concepts of violence are presented as something too large and abstract to comprehend. Instead a graffiti strewn wall provides a hint of humanity against a raging black mass, torrential, abject and bereft. 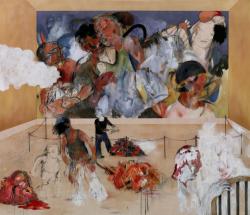 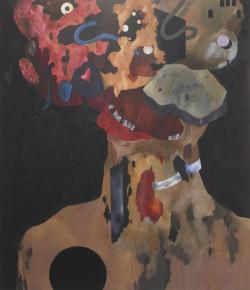 213 x 184 cm
Alsoudaniâ€™s Untitled is barely recognisable as a portrait. Mixing charcoal with paint, the surface evolves as a dirty corporeal mass, as pure colours become tinged by sooty dust and paint drips down the canvas in contaminated streams. Describing what might be a head, Alsoudani offers up an anguished abstraction combining organic textures with geometric forms. Rendering carnage with an almost cartoon efficacy, Alsoudani summates the base instinct of destruction as a volume of fleshy fields punctuated by industrial rubble; hard-edged circles and arcs lend an absurd consumerist familiarity suggesting windows and bullet holes in the cold pictograph motifs.

210 x 370 cm
"The falling statue of a despot in the centre of Baghdad I recalls the toppling of the statue of Saddam. The rooster-like figure symbolizes America. Here the rooster is not only a figure of control but is injured as well and constrained. The basket of eggs to the left side of its neck represents ideas - unhatched ideas in this case; an armory of fragile potential. Alsoudani’s fascination with molecules and cellular references are apparent in the central egg-shaped object in the center of the rooster’s belly. The flood bursting through on the bottom center of the canvas carries Biblical associations and references the fractured nature of daily life in Baghdad â€“ nothing works, pipes burst, the city is tacked together, evoked by the large nails depicted in different parts of the canvas. A figure on the upper right of the canvas bursts forth in a flourish of pageantry, representing the new Iraqi government, sprung forth from the chaos, compromised, bandaged and standing precariously on a teetering stool." Robert Goff 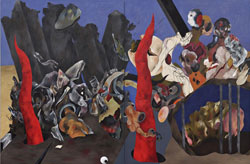 250 x 380 cm
"Baghdad II depicts a "typical" Baghdad scene: on the left side of the canvas a car has crashed into an American-built security wall - another suicide bombing attempt or an act of pure desperation. Stylized licks of red flame come up from the ground, an eyeball has rolled to the center of the painting on the bottom. The eyeball plays a role in terms of content and form but also alludes to Lebanese poet Abbas Baythoon. On the lower right hand side of the painting a head lies behind bars â€“ this is a reference to a statue in Baghdad, which here Alsoudani has decapitated and, ironically, brought to life as an imprisoned figure. One way to read this is that under Saddamâ€™s dictatorship art was constricted and imprisoned and this idea of censorship is continually evoked through a layered approach in this work. The female figure in the center right side of the painting is deliberately drawn in as opposed to painted, a martyr-figure both carrying and giving birth to change." Robert Goff 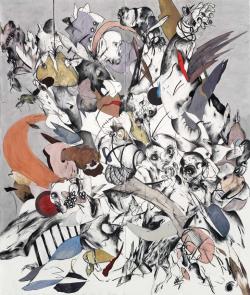 Charcoal, acrylic and pastel on paper

270 x 226 cm
Alsoudaniâ€™s Untitled mesmerizes with the power and chaos of an explosion, combining artistic references with combustive force. Reminiscent of cubist dynamics, Alsoudani approaches his theme of war from every angle, broaching the incomprehensibility of combat and its repercussions through his fragmented and turbulent composition. Drawn in charcoal and pastel Alsoudaniâ€™s gestures convey raw passion and intensity with a rarefied elegance, his subtle shading and ephemeral acrylic washes simultaneously evoking the detailed etching in Goyaâ€™s Disasters of War and the hyper-violent media graphics of Manga illustrations. Alsoudani negotiates these terrains with unwavering authority, responding to current events with commanding hindsight to develop contemporary history painting thatâ€™s both high-impact and enduring.

Ahmed Alsoudani may very well be a star in the making. But don't try to convince the young Iraqi artist of that.
Alsoudani, who lives in Portland, graduated last year as a painting major from Maine College of Art. This summer, he attends the Skowhegan School of Painting and Sculpture a significant honor reserved for the most promising artists in the country and this fall he enrolls as an art-school graduate at Yale.
Rather than celebrate his success as a sign of his greatness, Alsoudani prefers viewing his life as a series of fortunate occurrences. A native of Baghdad, Alsoudani fled the country after the first Gulf War, going first to Syria and later coming to Washington, D.C., for political asylum.
He spoke no English and knew only a handful of people. He had no solid plan, except to build a life in America. One of his acquaintances from Iraq happened to live in Maine, so Alsoudani came to Maine.
As he learned the language and customs on his new surroundings, Alsoudani also began flexing his artistic muscle. A painter, he makes abstract images that conjure his thoughts and feelings about the war.
Two of his recent drawings related to that subject are on display through July 1 at Filament Gallery, 181 Congress St., Portland. Influenced by the work of Arshile Gorky, Alsoudani creates wild, disjointed images that suggest chaos and confusion.
On June 9, he becomes a U.S. citizen during a ceremony in Bangor.

Alsoudani talked about his life and work last week at Filament.
Q.: I know a lot of artists do not like talking about their own work. But your paintings beg the question: Where do they come from?
A.: Most of my work deals with the war. The war for me is a life-and-death issue. I've been dealing with it since before I've been here, and it's hard to step away from it. I'm not interested in showing blood and war. I'm working really hard to capture the moment between when the aircraft are attacking and the moment after the attack, that line between life and death.

Art after 9/11 has not always gone in for drama or even violence. Like politics itself, artists often pushed images of war to the side. Nearly five years into war, though, violence in political art is coming back.

One may not associate Raymond Pettibon right away with politics rather than impulse, celebrity, and a style somewhere between graphic novels and graffiti. As a Yale graduate, no doubt, Ahmed Alsoudani is steeped in Modernism, and one knows where that led. Where, then, does political art begin and end? Even beyond subject matter, as it turns out, a little violence does painting some good. This article continues the story of a still more explosive show, "Love/War/Sex" at Exit Art.

Has political art, especially antiwar art, ever shown so little violence? Even today, one can hardly look at Goya's dark works or Manet's executioners without flinching. Guernica stills define the disasters of war for modern eyes. Yet, strangely enough, while art after 9/11 has flourished, as often as not it has shielded its eyes. And it is not hard to imagine why. In a sense, art is all about indirection, and recently that fact, too, has political overtones.

The administration did its best to keep Iraq off the home screen, and artists have bravely responded to just that. Perhaps their first and best contribution was to embody an alternative to fear. Art could look toward Ground Zero with hope. It could point to silences, in censorship and in the headlines. With Jenny Holzer, the price of war lies forever hidden behind the censor's ink. With Hans Haacke, it hides behind the American flag.

With Amy Wilson, torture appears like a riddle. With Fernando Botero, it appears like a pose within a stage play or a sexual ritual. Images like the hooded figure from Abu Ghraib remain in memory not from their explicit nature so much as from their muteness. The executioner's face is always well hidden.