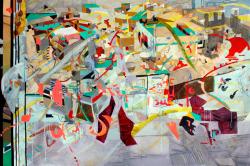 “In previous work Ospina has taken portraits from the web profiles of a tech-savy youth, literate in the manipulations and visual vocabulary of contemporary image-making. Having reframed these portraits via painting as an interaction between identity, technology and media, Ospina now pans back to present the world these avatars inhabit. [His new work reveals] an environment in which architectural spaces collapse into landscapes from news reports […] riot scenes fold in to bedroom interiors, […] recognisable landmarks are smothered by the overdeveloped filters of Photoshop extremists, […] it is an environment forged by the vagaries of the users of social media and the products that define them. Ospina’s work uses architectures of painting as a way of negotiating contemporary problems of image-making and artistic production in a networked world of complex relationships, inconsistent representations, and of technologies that have produced a flow of information at a magnitude and rate that is literally super-human. He says: “I try to work in ways that reflect continuous changes in attention at a rate and method that would have seemed absurd before the arrival of the Internet, simulating what happens in our minds when we jump from image to image accumulating and merging layers of visual information. I want the work to reflect how the Internet has mutated the way we look at sets of images or contemplate a stream of information." [His work] is ultimately a record of how the Internet has transformed our relationship to images, to space and to each other in bizarre and unprecedented ways.” 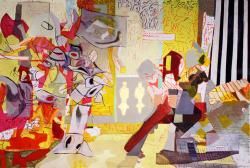 In this new work, Greba Orokorra and Broken city, he incorporates the new technological tools available to him to investigate the phenomenan of the bombardment of information from the internet and the theme of authorship. Using a computer and the algorithmic filters of Photoshop, Ospina digitally filters images with themes found on the web and reconstructs them using layers of these same images to create a new abstract associated with the original. We may see glimpses of a riot, the architectural stamp of a favella, or a manipulated image from his facebook, or a semi-recognizable painting we have seen before . Using the ‘magic wand’, he lifts elements of masters or contemporaries, appropriating ‘Bits’ of information. Through this process the result is a conglomeration of information and marks which are close in appearance to expressionistic paintings, without the weight of the angst. 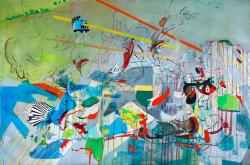 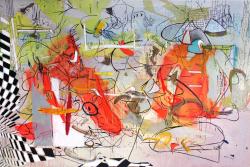 Alejandro Ospina uses painting as a way of juxtaposing languages of representation and exploring changing relationships towards image making.
His work frequently employs imposed processes of selection and production, reinterpreting forms of image making and visual culture via painting as a mediator for debate on issues such as voyeurism, private and public, processes and methodologies of image-making, identities of authorship and the changeability of embedded narratives.
Taking images from the media, particularly web-based and user-generated media, Ospinaâ€™s work mimics both aspects of their origin through comparable styles, formats and methods of painting, producing works that reassess both genres. His work explores the concept of a dialogue between the history of image-making and our contemporary obsession with virtual identity, media and representation.