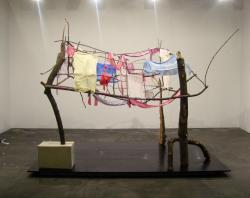 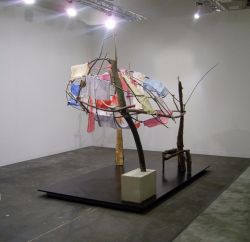 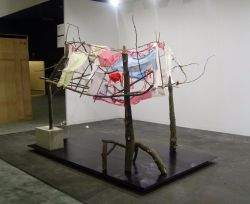 240 x 300 x 236cm
Alexandra Bircken‚Äôs unmonumental stretcher frame sculptures are informed by her background in fashion design and interest in the radical aspects of handmade culture. A fragmentary array of irregular objects and organic shapes, often coloured by the artist, is hung and displayed on strings and aluminium rods. 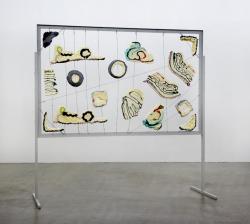 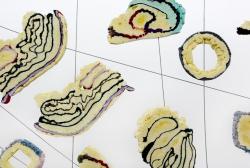 Frame: 140 x 220 cm Base: 80 x 185 cm
Embedded and held aloft as if on a weaver‚Äôs loom, lowly materials such as found tree trunks, slices of Styrofoam, building offcuts and thin cloth swatches (seen in Unit 1, Unit 3 and Unit 4, all 2008) are reincarnated as a new kind of artwork, twisting traditional painting and sculpture into icons of vernacular art and craft. 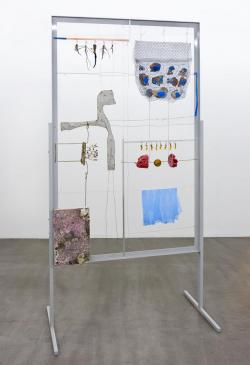 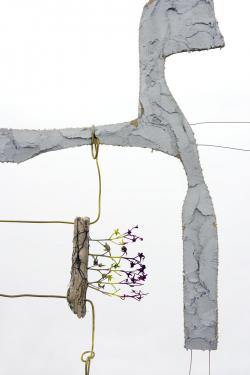 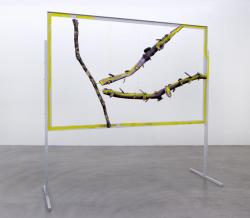 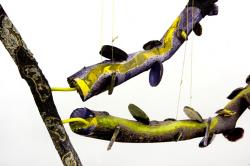 Frame: 140 x 220 cm Base: 185 x 80 cm
The detritus, wool, reedy trunks and rags that find their way into Bircken‚Äôs grids are reminiscent of the temporary architectures and all-incorporating make-do of alternative communities on the margins of mainstream society. The weaving and crafting involved in her method additionally brings to mind 1960s and ‚Äô70s feminist art politics.

When shown together, her works can appear as a radical lifestyle Gesamtkunstwerk. ‚ÄòI am interested in dismantling prevailing hierarchies of value regarding these objects and materials by way of connecting them, thus putting them in a new context to each other. It’s an alternative system or cycle.‚Äô 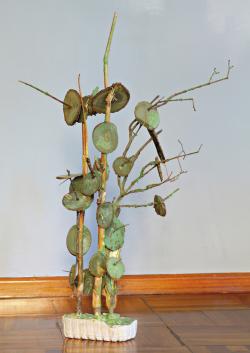 Since the gallery‚Äôs move from Cologne to Berlin earlier this year, BQ‚Äôs exhibitions have taken place at a series of temporary spaces. Given that these have been relatively unexceptional apartments, this has come to suggest an avoidance of the all-purpose gallery more than an explicitly site-specific programme. In this case, however, they have taken on a shop premises in one of the colonnaded arcades of a square designed, in 2001, in an extreme neo-classical idiom by the reactionary German architect, Hans Kollhoff. Alexandra Bircken brings a subversive strain of hippyish chaos to the stiff upper lip of the surroundings. Walking past the shopfront window you sense that some profound breach of decorum has been committed. Bircken‚Äôs background is in fashion design, and fabric remains one of her staple materials; in an area of high-end boutiques, her display of threadbare hand-me-downs makes its own iconoclastic statement. The exhibition‚Äôs title ‚Äì which translates as ‚ÄòEverything must be let out!‚Äô ‚Äì suggests constraint giving way to liberation.
Bircken‚Äôs work has always threatened to spill messily from its frames. It capitalizes on the tension between formal containers ‚Äì the plinth, the picture frame ‚Äì and the uncontrollable proliferation of her object making. Fabrics, organic matter (such as branches and food) and synthetic detritus combine to create composite, obliquely anthropomorphic forms. The accumulation of material here may sometimes recall a Jason Rhodes or Sarah Sze installation but such comparisons emphasize how Bircken is less concerned with the unfolding narrative sprawl of the objects than their potential to gel into startling juxtapositions. Old ingredients combine into new wholes with a theatrical flourish that is distantly related to the investing of dumb matter with life that occurs in figurative sculpture.
In this show, the habitual framing mechanisms have been subsumed, or become part of the activity. AL LEGO RIE (2009) has a roughly hewn wooden trunk support a block of primary-coloured Lego bricks. Viss (2009) stacks two office stools as a pedestal for Lego, pigment and an unprepossessing lump of grey concrete. A plastic water bottle protrudes somewhat phallically, its yellow neck like an embedded eye forced open.
The space is dominated by Source (2009), an installation arranged around a wooden structure ‚Äì like the skeleton of an oversized child‚Äôs playhouse ‚Äì containing plants, food leftovers, wicker baskets, cardboard boxes overflowing with rags and a delicate mobile made out of used tea bags and light bulbs. It might be a refuge for the relics horded in your attic if you were born somewhere between the late 1960s and the early ‚Äò70s. Nostalgia is the melancholic corollary of the found material, but it is always counterbalanced by the present-tense inventiveness of Bircken‚Äôs process.
A series of large photographs leans against the back walls (Knot Picture I, IV and V, 2009). Mounted on chipboard in rough crate frames, they are multi-coloured close-ups of knitting, which a cursory glance might take for action painting, the skeins and stabs of wool imitating Abstract Expressionist brushstrokes. This illusion takes up a thread of ambiguity between what is real and what is fabricated: amidst Source, an old pancake, turning brown, is real, but a hunk of cheese is plastic; real grass grows out of the cross section of a mannequin, stood on the front window ledge (P√ºppi gone astray, 2009). Nothing is what it seems. We are brought to see afresh objects which have been rendered invisible by familiarity, to bypass the cultural associations with which they have automatically come to be linked and discover new ones.