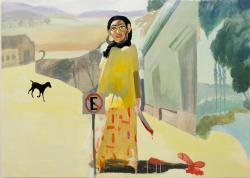 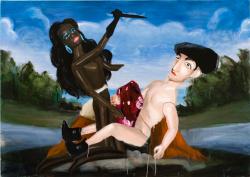 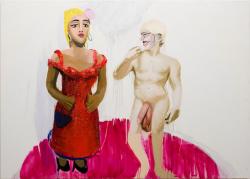 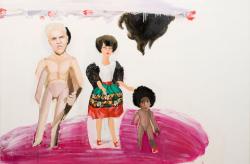 You'll recognize the stories in Alida Cervantes' paintings, even if you haven't seen some of them play out like this beforeâ€”after all, a lot of girls confess to having done some bad things to their Barbies. Cervantes, a Mexican artist who was born in San Diego but grew up in Tijuana, plays with dolls, puppets, kitsch figurines, and masks: the miniatures, for the most part, that we've made of people. She blows them up - these paintings are bigâ€”and explodes assumptions about image and power. Cervantes' paintings present a kind of distilled folklore, both hellish and humorous, telling tales of love and violence and the power struggles inevitable in both.

The paintings are inspired by Colonial Mexican casta paintings which depict a variety of racially diverse couples and their offspring in different settings, often arranged denoting their social class. Cervantesâ€™ paintings depict mixed-raced men, women and children using a loosely painted style to create an eerie, disjointed interpretation of race amidst images of violence and aggression. In her video, a cross-dressing satire, the artist plays the character of El Puro, a Cuban exile living in San Diego who has a regular daytime job but whose fantasy is to be a Cuban salsa singer.
Born in San Diego in 1972, Alida Cervantes earned a BA from The University of California, San Diego (1995); studied at Scuola di Arte Lorenzo di Medici in Florence, Italy and is currently an MFA candidate at UC San Diego. This is her first solo exhibition with the gallery. Cervantes lives and works in San Diego and Tijuana.

It is not so common for heterosexual women to dress in drag, as men, and mock gender stereotypes. Not in the Cuban context. That is not to say that macho men mannerisms are not the objects of jokes and comic skits, like The Pichy boys do -to just name one example among many; (some of their videos, aired at Miamiâ€™s canal 41, are on youtube and are hilarious. But Alida Cervantes, a San Diego-based, Tijuana-native, painter and an MFA candidate at UCSD, has a discourse about it that goes beyond the mere mockery and seeks to expose male domination and subvert Cuban -and Latin- machismo. She does not propose to transcend the biologies of gender nor their social value -hers is not a queer performance. What she seeks is to destabilize the cultural associations that are attached to the male-female opposition in Latin societies. Alida is intimately acquainted with Afro-Cuban culture, partly via her life partner Silfredo La O Vigo, who is a supporting character in her â€śEl Puroâ€ť series, paâ€™ que luego no digan de los hombres cubanos. She directly confronts the expectations surrounding heterosexual and interracial erotic desires by performing the various characters that conform this gendered universe. She dresses in drag and impersonates timba stars who, in turn, have made a career out of glorifying their hyper machismo. She also takes on the role of the sexually voracious woman demanded by the macho man.
Alida uses play back to perform some of their most popular dance numbers, which, at the same time, she makes into video pieces. Here are two examples. In the first, she is performing Manolito y su Trabucoâ€™s Te Dejo Libre, a song about a woman who, left by the man, will remain a spinster. In the second video, she performs all the characters, male and female, in a song by NG La Banda.