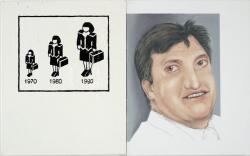 52 x 82 x 2cm
Amir Chassonās paintings seem to juxtapose two different ways of understanding the world: the statistic, represented in graph form, and the individual, a close-up portrait. At first look, this combination ā man against number ā might stand for a straightforward social critique, or a restaging of an age-old conflict in painting itself (the figurative against the abstract). Yet itās the act of painterly transcription, and particularly Chassonās soft, almost tender blurring of the transitions in a human face, that complicates such an easy reading. 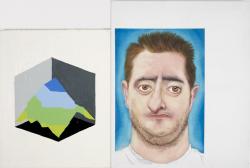 61 x 91 x 2cm
The eyes of his painted faces meet ours warily, or look away in response to scrutiny, recalling photographs taken quickly, perfunctorily ā the workplace headshot, maybe, or police mugshot. Paintingās slowness transforms the image into something to be looked at, not merely a functional identifier for a laminated pass, and it does that for the graphs, too. 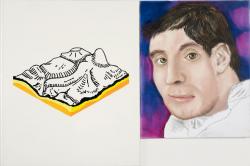 61 x 91 x 2cm
Stripped of numerical data or titles and rendered in household paint, they become mute abstractions hovering in space. Painting levels the playing field, enabling lines of communication and sympathy to be drawn between the two: they become (as in a work like Mat is Helping Us) a kind of double portrait. Released from language ā this personās job, this graphās meaning ā Chassonās works are celebrations of not knowing, small assertions of mystery and doubt. 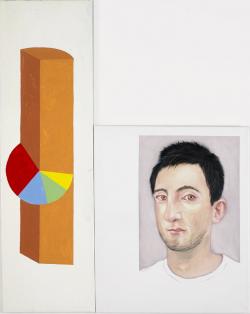 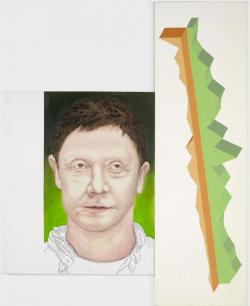 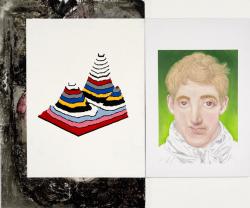 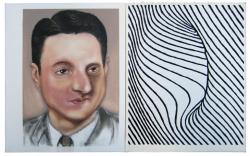 Amir Chasson
Mat Is helping Us 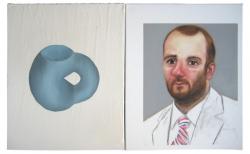 Amir Chasson
No Other 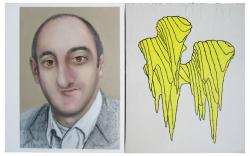 A CONVERSATION BETWEEN ALEX WATERS AND AMIR CHASSON
2012, by Alex Waters, Outpost

Alex Waters: Your work for this exhibition appears to be comprised of three separate elements: the painted construction which hovers somewhere between abstraction and geometric design, whilst also hovering between painting and sculpture; the portraits, painted with a smooth surface and careful attention to detail; and the found image (Elvis and parents). Can you talk a little about how these elements fit together? Have you constructed a 'house of cards', or can the individual parts exist without the whole?

Amir Chasson: Like most things in life, the show can be perceived in three ways:

1. As one homogenous entity, an organic whole, in which the parts are custom-made for each other. In this interpretation, the three components ā the tower, the Presley family press photo and the portraits at the back ā are in a co-dependent relationship, each equally important and all essential for understanding the whole. They are linked together in a kind of symbiosis, feeding on one anotherās presence.

2. As two separate mini-exhibitions. The first consists of the imposing tower that confronts you as you come into the gallery, with the Presleys as its sidekick. The second starts when you walk behind the tower and view it from the other side. Then you see the spit and string it is made of, the bolts and screws that barely hold it all together. And you experience this sense of disillusionment ā which is reflected back at you in the portraits, slightly hidden from view up to that point, which, with their resigned and patient expressions, are waiting for you to discover them.

3. As three completely separate components. In this interpretation, what is at stake is the inherent ambition of the two-dimensional image to appear as a three-dimensional object ā and the sadness that comes from the realisation that, in the end, this is futile, and the flatness of the surface will always prevail. Of course, there is also sadness and melancholia in the Presley family photo and the portraits, which show how, particularly when people have to keep up appearances, all their neurosis and fear float to the surface and reveal themselves in the form of a crooked smile and a skin condition.

OUTPOST is pleased to present an exhibition by artist member, Amir Chasson.
In recent years, Chasson has contrasted gently distorted faces with something altogether different.
Unknown data, in the form of painted charts, diagrams and organic formations, both familiar and imagined, are the antithesis of the portraits with which they are paired. Side by side and coolly disassociated, each gestures a sense of meaning towards the other, but does not undermine or confuse. The pairings sit in equal balance, but ultimately neither acknowledges its opposite.
Dominating the entire gallery space, a large zig-zagging structure stretches upwards, past the metal girders to reach the apex of the roof. A combination of smaller canvases bolted together, this hybrid sculptural, yet painterly structure is a seemingly changeable entity. Variations of the same pictographic symbol, recalling those which mirror Chassonās figurative paintings, ascend the canvas surfaces in precise columns. Although the structure dominates the space, Chassonās conventionally sized portraits can be also be viewed on the gallery walls around its different levels.

From Philip Guston in Edinburgh to Dada Fest in Liverpool, Skye Sherwin and Robert Clark find out what's happening in art around the country.
The men in Amir Chassonās paintings have familiar faces. Itās not the nagging āwhere do I know them from?ā you get from a brush with a minor TV personality. Rather, itās that usually his cast of middle-aged guys with thinning hair, tasteless ties or tired polo shirts are the epitome of Mr Normal ā so middle-of-the-road theyāre impossible to pin down socially. Rendered with wonky, puffy features, the noses swollen, the eyes, a little lop-sided, these everymen are offset with paintings suggesting data, depicting pie charts or topographic diagrams.

For his inclusion in this yearās Bloomberg New Contemporaries, Israeli-born London-based artist Amir Chasson presents eight paired sets of paintings, each depicting a graphic shape on one side and an unknown portrait on the other. Softly painted with mildly exaggerated features, his gently bulbous characters peer indifferently from the canvas, exhibiting an unerring detachment from their partnering data. Echoing the diffusing style used to render the men, recognisable symbols such as pie-charts and stack graphs give way to the more ambiguous āHand drawn topo mapā (2010) and the fallible āSpecial purpose pictorial graphā (2009), producing an unnerving meld of statistical fabrications.
āThese portraits of unknown people, when juxtaposed with an obscure symbol of data that carries no clarification as to what it represents, can be associated with any possible statistic or measureā, explains Chasson. āBy being placed next to the charts, the men serve as poster-figures - or āposter boysā - for an undisclosed sector of the population.ā
Belying Chassonās strong background in typology and design, the artist links the struggles faced by the viewer, when trying to equate the portrait with the graph, to the modes employed by commercial communicators. āThey [graphic artists and copywriters] already know that by slightly complicating things, they allow the viewers to see something else in the work, beyond the familiar 1+1=2 formula, which in the case of my paintings is: society (as represented by the graph)+ the individual (the portrait) = meaningā.
An intriguing cross-disciplinary move characteristic of this artistās unwaveringly progressive approach, Chassonās provocative juxtaposition of the painterly with the pictographic disrupts our nominal reception of either of these categories. In doing so, it becomes difficult to associate these portraits with any particular demographic or social grouping and significantly, the works then begin to function as simply signs for people.

āEyeless in Gazaā and āWhy I am not Christianā. Attempts at credible and powerful capturing and generation of personality and charisma, both to the real sitters and invented (yet somehow familiar) personages, in addition to the person depicted or conveyed, also to the whole look, physicality and presence of the painting.
Another aim is being identified with or even emotionally moving the viewer. Very much aware of the apparent and supposed personalisation and humanity used in much art, mass culture, media and technologyāwhich somehow make their way into everyday real-life.

Graphs render the world data: measurable, quantifiable, knowable. Then thereās this lot, these asymmetrical blokes with their Mr Topper haircuts and JJB sportswear.
During the selection we couldnāt put anything next to them. They made everything look stupid.