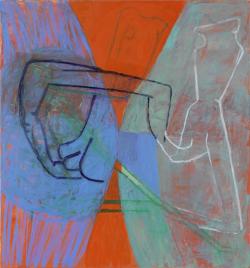 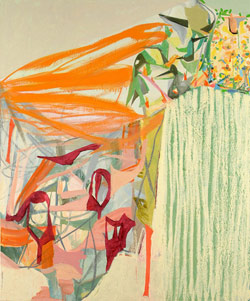 183 x 152 cm
ŌĆ£Painting is a physical thinking process to continue an interior dialogue,ŌĆØ Amy Sillman states, ŌĆ£a way to engage in a kind of internal discourse, or sub-linguistic mumblingŌĆ”ŌĆØ. Amy SillmanŌĆÖs canvases offer glimpses into a subliminal world. Strangely intimate, her abstractions negotiate a space of both ideas and feelings, inflected with an emotional empathy. ŌĆ£In Cliff 1, a family of mallards is camouflaged between a field of daisies and a bright orange shape that is beginning to dissolve, like a jetŌĆÖs vapor trail. Striped drapery and a painterly tangle of pastel pinks and baby blues add to the atmosphere of cheery beginnings.ŌĆØ David Pagel. Her paint techniques mirror the convergence of unconscious thoughts: rock rendered with the chalky texture of rubbings, sunset as violent deep orange slashes, birds and flowers with cartoon folly. Amy Sillman paints with a sense of intuitive immediacy, attempting to purposefully broach the fragmented territory of affect, of embarrassment and awkwardness, conveying a sense of experimentation and discovery within her pensive gestures. 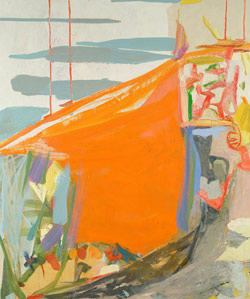 183 x 152 cm
Amy SillmanŌĆÖs work is highly intuitive; her rich, colourful paintings flow with a stream of conscious expression. In her canvases, forms effuse in disjointed rhythm, colour has the weightlessness of pure light. The delight in SillmanŌĆÖs work is in the complexity of her
application. ŌĆ£In Cliff 2 the bright orange polygon in the middle of the painting rhymes beautifully with an angled slab of black, some blue cartoon clouds, a messy expanse of loosely painted flowers and a swatch of flowery fabric. Two pairs of long legs, which belong in a kidŌĆÖs stick-figure drawing of a couple of ducks, descend from the pictureŌĆÖs top edge, suggesting even goofier goings-on beyond its border.ŌĆØ David Pagel. In her study of how to express the totality of something, she becomes absorbed in the semiotics of painterly language itself: thick impasto mixes readily with sly dabs and drizzles, radiant hues and hurried gestures appear in their own space and time. Amy SillmanŌĆÖs composition suggests private thought that is simultaneously whimsical and brutal. 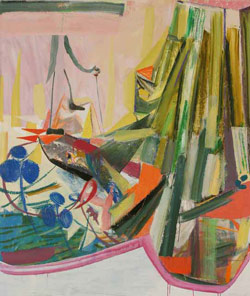 198 x 167.5 cm
Reminiscent of cubist painting, Amy SillmanŌĆÖs The New Land creates a landscape of fragments, where shapes and colours converge as independent forms, never quite resolving as a whole.
Sillman addresses her canvas with a painterŌĆÖs heart-felt affection, each gesture becomes a consuming sentiment of expressive absorption. Set against the dalliance of a chalky pink ground, elongated stripes of green congregate with animate integrity, vibrating against patches of electric orange, and off set by contradictory suggestions of spindly flowers and figures. As layers overlap and forms collide, SillmanŌĆÖs painting descends into a wonder of action and associative reference where bodily experience, memory and perception tangle together. 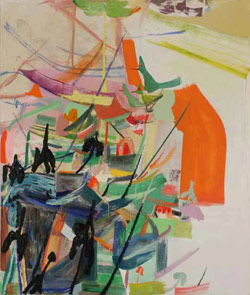 198 x 167.5 cm
Part of the strength of Amy SillmanŌĆÖs paintings derives from their conscious use of awkwardness as an aspect of form. Unfolding as a series of spontaneous developments, My Pirate captures the procession of thought, mirroring the meander of the subconscious. Through this free-form approach to painting, Sillman develops a painterly dimension where landscapes emerge as emotive terrains. Formalist structures of lines, shape, color, and shading become signifiers - pensive, blissful, menacing, or frail - each lending their qualities to almost recognisable forms. Attenuate lines become sunbeams and grass, splotches of colour are read as flowers and lakes. Within her complex abstractions, Sillman offers a sense of self: a deeply intimate position in space, time and mind, reflective of a transient perception of beauty and imagination. 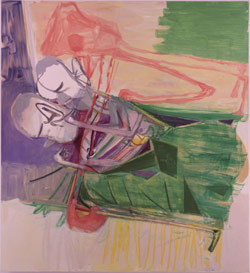 231 x 213.4 cm
In Bed, Amy SillmanŌĆÖs intuitive process is used to convey both loose narrative and psychological uncertainty. With her sumptuous pastel tones tinged with a dirty, dusky pallor, SillmanŌĆÖs composition doubles as abstract painting and the ambient architecture of a room. Overlaying her swiping brush marks with delicate lines and precise hard edged shapes, Sillman illustrates two figures huddled in a bed, creepily embraced by a third ghostly presence hovering above. BedŌĆÖs pink tones and ephemeral description offer a distinctly feminine sight to sexuality, conveying an intimacy as a totality of self: where carnality and emotional fragility are entwined as apprehensive gesture. 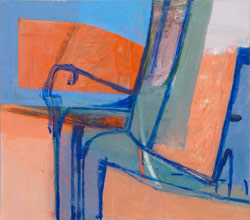 115 x 130 cm
In Window, SillmanŌĆÖs fragmented imagery is exchanged for pure abstraction. Using a limited palette of blues and oranges, SillmanŌĆÖs blocky planes of colour and thick line delineations create a paradoxical sense of space. As layers of gestural brush marks record her creative process through painterly illusion, the composition suggests an organic architecture, evoking an expanse of internalised psychological perception. SillmanŌĆÖs highly sensitive style captivates with a disarming resonance, negotiating the sublime traditions of abstract painting with a rarefied and momentous confidence.

Amy SillmanŌĆÖs highly publicized split from abstraction may not be quite as dramatic as she made it sound in her sassy breakup letter on Bomblog in 2009. To her credit, she was never a card-carrying member of the High Church of Abstraction anyway. I think some of the works in Transformer (or how many lightbulbs does it take to change a painting?), her current show at Sikkema Jenkins & Co., are in some ways more abstract than previous efforts. But it doesnŌĆÖt really matter; labels are stupid.
IŌĆÖm so sick of painters claiming Philip Guston as a forebear, but SillmanŌĆÖs mixture of confessional cartooning and dark humor, which mirrors GustonŌĆÖs notorious move away from abstraction in 1970, feels authentic. While GustonŌĆÖs figurative intention seemed to elucidate the shades-drawn reclusiveness that he saw both in his artist-self and in the hooded figures of the KKK, Sillman seems to be growing more direct and open about her revelations than he ever was.
In a powerhouse group of new drawings, which are the first thing one encounters in this fairly extensive show, body parts stretch and mash together to create awkwardly structural forms that somehow explain the humor and futility of life, sex and art making. Hung in a tight grid, these works never get morbid or didacticŌĆöthings are confidently upbeat and amoral.
If sex was the elephant in the room for SillmanŌĆÖs 2007 show at Sikkema, then love may be lurking somewhere here. Not the mature, late-in-life-walk-on-the-beach-type love, but lurid,new love. The type of love that makes you not care what your friends think if youŌĆÖre a little too busy enjoying life to return their calls and texts like you did when you were single.
Some of the stuff in this show is intentionally nerdy. A second series of drawings takes a rather lengthy narrative spin around the creative process, ending with a drawing of a curlicue light bulb over what appears to be a cutesy self-portrait. A hand-scrawled note on the wall above a table of ŌĆśzines says something like ŌĆśzines $1 (honor system).ŌĆØ The ŌĆśzine itself is cool, but the writing on the wall seems desperately DIY. But so what? We forgive these things of our friends who are in love. If theyŌĆÖre happy, so are we.
In a way, this entire show could be read as an earnest attempt to explore the erotic self as it intersects with technology and sensory perception. To this end, Sillman bets the house on old-fashioned painting, looking square in the face of trend shifts and technological advances. She makes a strong case. While IŌĆÖve never been a fan of her adherence to old-school painting styles, with surfaces reminiscent of such un-hip practitioners as Richard Diebenkorn or Terry Winters (ack!), in these new paintings she somehow makes it all palatable. It is refreshing to see an artist not give a shit about the whole digital effect on abstraction. Plus, by now weŌĆÖve learned that there really isnŌĆÖt any one dominant medium or train of thought in painting. Pitting abstraction against representation is ultimately counterproductive. SillmanŌĆÖs public ŌĆ£breakupŌĆØ with abstraction might be overstated, but the paintings are convincing enough that we donŌĆÖt really care.

If Amy Sillman's career path were plotted on a graph, following the line of her early years would be as challenging as disentangling a single pink drip from the skein of color looped across a Pollock canvas.

Rendered in words, the twisting line would read: Graduates high school in 1973 in the Chicago suburb of Highland Park. Heads north to Beloit College, Wisconsin. Tires of school in first year and heads even farther north - to work in cannery in Alaska. On a whim, hops across the Pacific to live in Japan. Within months, returns to Chicago to work in feminist silkscreen factory. Lands at NYU in 1975 to train as a Japanese interpreter for the United Nations. Enrolls in fine art class and is advised by professor to limit aspirations to commercial art. AT LAST - the pink drip line breaks free from the maze of color: Sillman transfers to Manhattan's School of Visual Art and discovers the painting department. "I realized there were other girls there who wore black T-shirts and read Sarte and were depressed," she recalls. Not only had she found soulmates, but also the passion that would transform her career graph into something more akin to Agnes Martin's sustained, hand-drawn lines than Pollock's complex tangles.