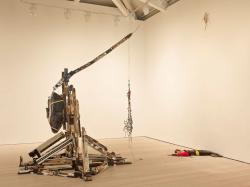 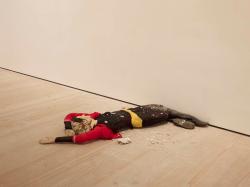 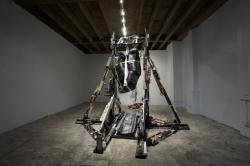 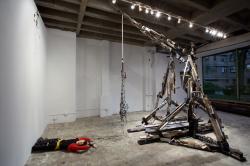 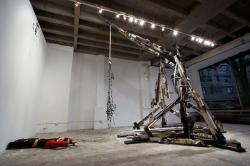 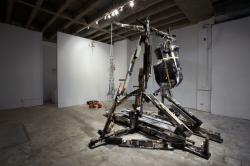 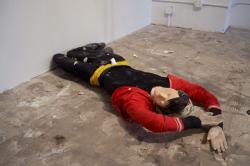 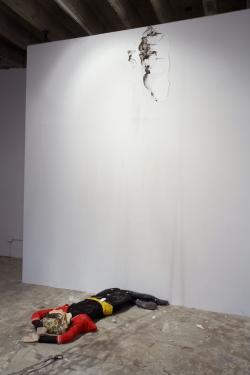 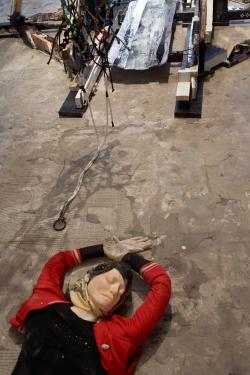 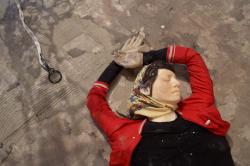 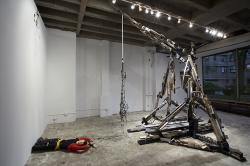 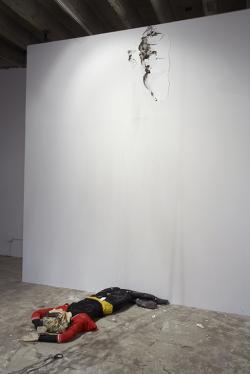 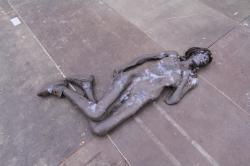 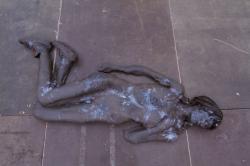 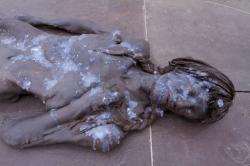 Andra Ursuta ‘The Management of Barbarism’: The Romanian artist's work speaks to her country's dark past.
September 2010, by Nana Asfour, Time Out, New York

For her debut New York show, Romanian artist Andra Ursuta both celebrates and denigrates her native culture’s morbid bent. In the main room, a bed of broken eggshells, decorated in bright colors and generic folk-art graphics, covers a concrete slab, while black hunting arrows sprout out here and there. The wacky piece is both stunning and puzzling: The oblong shape suggests a sort of burial plot, but the work could easily double as a sly caricature of Eastern European pageantry.
Further afield, a pink, coffin-shaped tent solemnly lies in a corner. Next to it, a group of potatoes are nestled in a crack in the floor, hooked up with wires. These lead to a set of headphones out of which emanates a sometimes rambunctious, sometimes doleful Romanian folk tune. Titled Extinction Kit (Songs to Die For), this three-part piece amounts to both a canny derision of survivalist go-bags and a piercing lament for Romania’s traditional music, which is apparently on its deathbed. The macabre theme is rounded out by Breath Hold (Discipline and Vanish), a noose tied to a urethane-cast balloon, and Ass to Mouth, a wooden, rhomboid-carved stake, covered in black rubber. The latter, a riff on Brancusi’s Endless Column and Vlad the Impaler (otherwise known as Dracula), is, like the beautifully drafted pen-and-ink drawings in the back room, an artwork that makes more sense once you read the accompanying text.
As it happens, Ursuta’s writing on her work conveys an incisive analysis of Romanian culture and history. But it would be better if her art could likewise express the clarity of her thoughts.

Andra Ursuta, who was born in Romania in 1979 and has lived and worked in New York since 2000, operates in several modes, all cheerfully dark. There are the fine little nature studies of decomposing human forms and crawling insects framed in cast dirt that she has exhibited at White Columns, and the cutely sinister dollhouselike rendition of the modest one-room house she grew up in that can be seen, along with more drawings, in “Ostalgia,” an exhibition of art inspired by life in Eastern Europe at the New Museum. This little chamber is overseen by a white phantom made of the soap that her parents produced for a living.
For her second solo at Ramiken Crucible, Ms. Ursuta has created a life-size tableau titled “Vandal Lust” that was partly inspired by “The Man Who Flew Into Space From His Apartment,” Ilya Kabakov’s 1984 installation piece about escape from Soviet Russia. “Vandal Lust” centers on a crudely made catapult that has apparently been used in an attempt to launch the artist into space from the gallery. That she didn’t get very far is suggested by a large dent in the back wall and a babushka-wearing female mannequin (with a face resembling Ms. Ursuta’s) that lies, slightly flattened by the impact, crumpled on the floor.
In Ms. Ursuta’s best efforts, her narratives are convincingly bodied forth by a distinctively fractured, somewhat deprived sense of craft. The catapult in particular is cobbled together from scraps of lumber, cardboard, resin and plaster, with straplike lengths of fabric woven with a floral motif left over from a line of peasant-inspired sportswear that the artist once designed. Despite its size and brutishness, this structure also has aspects of delicacy and even miniaturization. It almost seems to be made from a network of tiny corridors and passageways, all clogged with stuff. In other words, it is implicitly and structurally insane, which is consistent with the overall scheme.