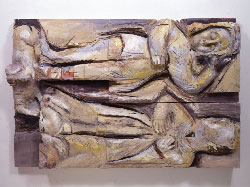 Anne Chu
Tombstone for a King and Queen

111 x 167.6
Drawing her inspiration from ancient sculptures, such as funerary carvings from the Tang Dynasty, or the medieval friezes at Chartres, Anne Chuďż˝s version of history is something more akin to fairytale. Primitively carved from wood, Chuďż˝s invented relics capture a rich, timeless aesthetic, which makes their authenticity all the more believable. Tombstone For a King is a rough-hewn tableau depicting a ďż˝long forgottenďż˝ tragedy. Her clunky figures are careful study of craftsmanship, displaying a casual presence rarely found in ancient depictions, her washy pigmentation is convincing as battered remains. But itďż˝s her dreamy colours, greys, pinks, and yellows, which give rise to girly romance: her ďż˝ancient dynastiesďż˝ always seem strangely contemporary, bringing mystery and romance to life.

Anne Chu is no old-fashioned artist, even if her painted sculptures borrow elements from Tang Dynasty ceramics, VelĂˇzquez paintings and characters from eighteenth-century operas. The New York-based artist also uses cameras and computers to make her figurative work, in materials that run from styrofoam and wood to fabric, sugar and salt. Still, it is difficult to imagine anyone as petite as Chu wielding a chainsaw â€“ she stands hardly more than five feet tall. Yet there it sits in a rear alcove of her Chelsea studio, on the table where she carved the larger-than-life marionettes that greeted visitors to her show in New York last winter.
The exhibition, at the 303 Gallery, included figures whose lively wooden heads, hands and feet were loosely attached to wire armatures built, at her direction, by Chuâ€™s husband Philippe Jacquet, and dressed in homemade clothes. A black raven cast in bronze kept watch from a perch near the ceiling. Humans werenâ€™t the only viewers flocking to see it. The gallery has a large picture window overlooking the street. â€śOne night,â€ť Chu recalls, â€śthe staff left the lights on, because the show looked so nice from outside, but the next morning there was an imprint of a birdâ€™s wing on the glass. They didnâ€™t leave them on after that.â€ť

Amid the sea of slick objects in West Chelsea, Anne Chu's larger-than-life puppet sculptures come across as shockingly raw and old-fashioned. But craftsmen of the past would never have constructed objects in this way, leaving things slightly unfinished and full of clues as to their making. Pure anachronism, you might think--but their fluidity of reference implies a global and chronological breadth that's very contemporary. These figures function like fissures between historical epochs and aesthetic categories, a mechanism fundamental to the way they work.

In the eight sculptures on view, Chu alluded lightly to a variety of sources: from commedia dell'arte to Velazquez, Edgar Allan Poe to ancient Chinese art, animation to ethnographic wood carving. In the front gallery, three awkward figures stood on a platform, with strings from marionette crosses wired to the ceiling attached (uselessly) to their heads and hands.