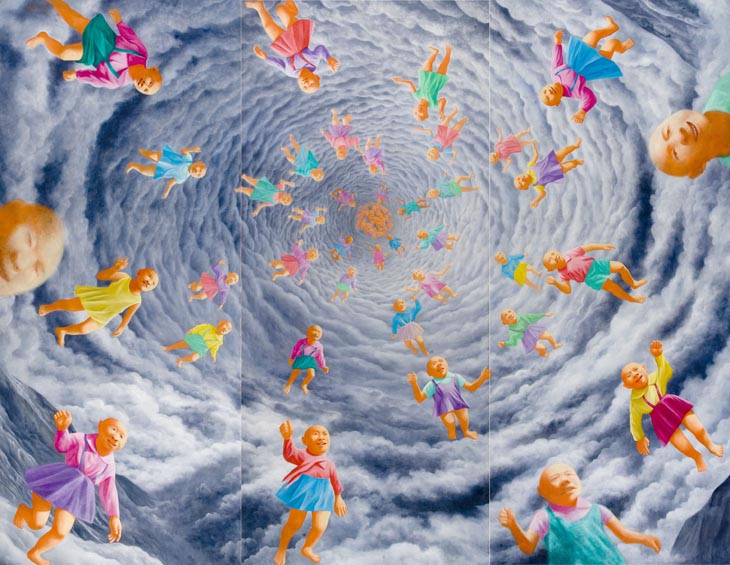 One of the leading proponents of the early 1990s Cynical Realist movement, Fang Lijun’s work encapsulates the disillusionment of China’s youth; a generation defined by the events at Tiananmen Square and China’s internal domestic policies. Constructed around loose narratives Fang’s images personalise sentiments of disenchantment, angst, and rebellion; his fictional suggestions conveyed through his illustrative style and re-occurring bald-headed protagonist.

Fang’s practice exhibits a rarefied technical skill rigorously studied through his Social Realist training; his combination of this aesthetic with references to contemporary comics, folk art, and dynastic painting characterise a national identity in flux, distilling a position of integrity from tradition and the modern world.

Fang’s monumental sized prints revive the ancient Asian practice of woodblock printing -- a complicated and exacting process of carving a ‘negative’ image into a panel, coating the surface in ink, and impressing the image onto paper; each different colour and tone requires a separate plate and order of printing. Due to their immense scale, Fang’s images are composed on several adjoined scrolls; the elongated strips create both an emotive fragmenting of the image, and create a reference to memory and historical testimony. Thematically, each of these prints describe the plight of the individual against the ‘mass’, creating a spiritual contemplation of solitude the quest for personal probity in the face of adversity.

Fang’s painting 30th Mary evokes these same sentiments with a humorous effect. Reminiscent of European church ceiling paintings, Fang portrays an order of ascendancy of same-same kewpie figures, each based on his own image. Executed with painstaking hyper-realism, the clouds formulate as a tempestuous funnel rather than a portal of billowing promise. Contrasted with the kitsch palette and pop rendering of the grotesque cherubs, Fang’s painting approaches the sanctity of ideological assurance with an empathetic cynicism.