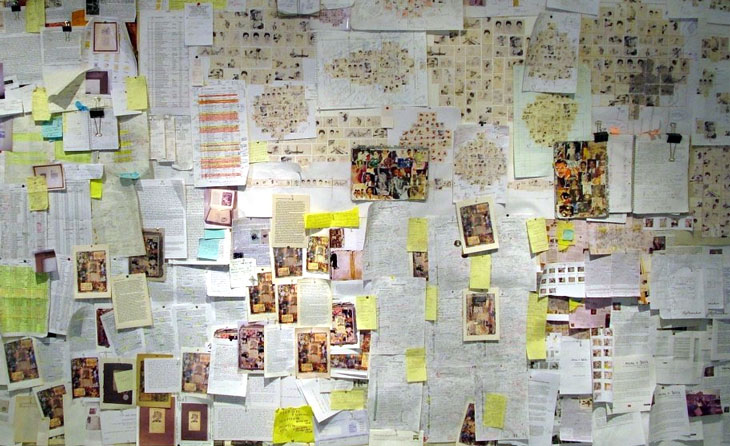 Naomi V Jelish’s life story is one of pathos and tragedy.

Her strange tale is explained to visitors on labels, in newspaper cuttings, photographs, school reports and through personal mementoes.

Naomi showed great aptitude for art in the face of complete indifference from her family and school. But in 1991, a few months after her father drowned, Naomi, then 13, her mother, and her four siblings mysteriously walked out of the family home in Gravesend, Kent, and despite extensive police inquiries, none of them has been seen or heard of again. A cutting from the Kent Messenger discloses that in September 1990 Naomi won "the prestigious North Kent Student Art Prize".

In August the following year the paper reported that police were concerned because the family had vanished. Neighbours said the family seemed "cursed". David Jelish, the head of the family and a road mender with Kent county council, had drowned while saving one of the children, another child had recently survived electrocution and Vanessa, the children’s mother, was suffering from a stress-related illness following the death of her youngest son in 1989.

A book accompanying the display at the Saatchi Gallery goes on to say that Naomi’s precocious drawings were recovered from the abandoned house some time later by the late John Ivesmail, a science teacher at Naomi’s school who had befriended the family. Though beguiled by her sketches, he waited until 1999 to show them in a small exhibition in Gravesend.

Soon after, he passed Naomi’s pictures to a friend, a young artist called Jamie Shovlin, who curated an exhibition of the drawings, along with all Jelish memorabilia recovered from their house and the newspaper cuttings.

The story of Naomi is moving, but it is a hoax, the products of the imagination of Shovlin, 25, from Leicester, a graduate of the Royal College of Art, who spent three years creating the fantasy.
He produced the drawings, the cuttings, the school reports et al in order, as he explained, "to test the boundaries of ambiguity".