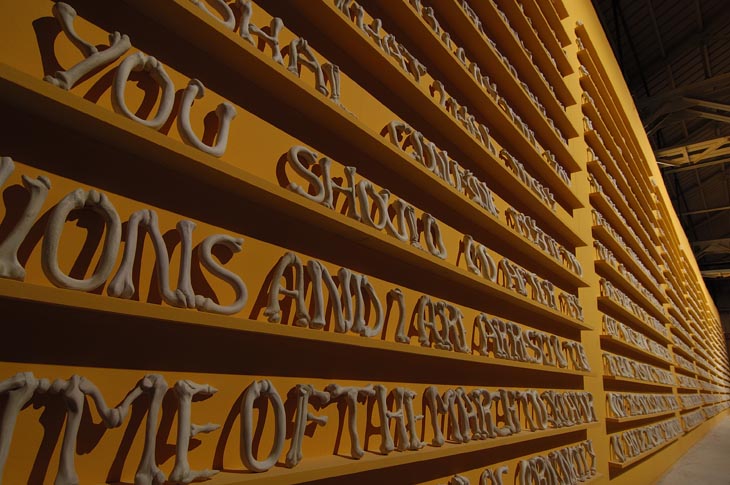 Within my practice, ’Public Notice 2’ (2007) links up with two key antecedents, ’Public Notice’ (2003) and ’Detergent’ (2004), both works wherein a historical speech is summoned as the central armature of the work. Blurred and sometimes forgotten due to the passage of time, the historical speech is fore-grounded and held up as an apparatus to grade our feats and follies as nations, as humankind.
’Public Notice 2’ (2007) re-invokes the momentous speech delivered by Mahatma Gandhi on the eve of the historic 400-kilometer ’Dandi March’ lasting about 24 days during the Indian Freedom Struggle. On the 11th of March 1930, prior to setting out to break the brutal Salt Act instituted by the British, Gandhi laid out the codes of conduct for his fellow revolutionaries. He called for complete ’Civil Disobedience’; the only fierce restriction being that of maintaining ’total peace’ and ’absolute non-violence’.
The speech has within it several themes that may aid our ailing world, plagued as it is with aggression. In today’s terror-infected world, where wars against terror are fought at prime television time, voices such as Gandhi’s stare back at us like discarded relics. The entire speech will be constructed out of about 4500 recreations of bones shaped like alphabets. Each alphabet in this speech, like a misplaced relic will hold up the image of violence in clinical clarity even as their collective chorus makes a plea for peace.
Within the Indian context as well, we have the worst instance of subversion of Gandhi’s words in the year 2002 within his own home state of Gujarat. The historic ’Dandi March’ and the speech were delivered not far from the site where India saw one of the worst communal riots and bloodshed since the Indian Independence.
Jitish Kallat
Mumbai

Public Notice 2 recalls the historic speech delivered by Mahatma Gandhi, on the eve of the epic Salt March to Dandi, in early 1930 as a protest against the salt tax instituted by the British. Through this speech he lays down the codes of conduct for his fellow revolutionaries, calling for complete civil disobedience, the only fierce restriction being that of maintaining ‘total peace’ and ‘absolute non-violence’. In Kallat’s work, Gandhi’s ardent speech is recreated as a haunting installation with around 4500 bone shaped alphabets recalling a turning point in the nation’s history. Each alphabet, like a misplaced relic, holds up the image of violence even as their collective chorus makes a plea for peace to a world plagued with aggression.