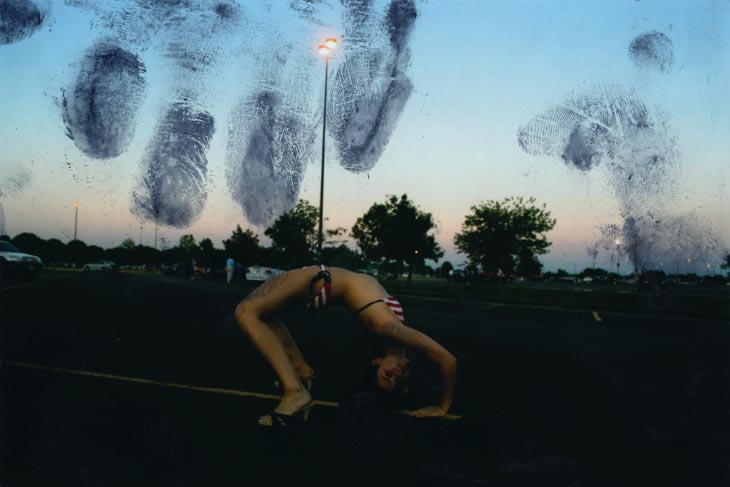 I’d always thought of ‘Lucky Tiger’ as a cheap Chinese aftershave lotion, its name promising its users success in the hunting of women. Laurel Nakadate may not have had this particular association in mind, but her tiger is certainly out for sexual adventure: it’s crouching right there on the crotch of her bikini, ready to pounce. And she invites men to paw her. Posing as a Lolita updated for our times, Nakadate goes off on an American road trip with a big, virile pick-up (her work involves a lot of word-plays), posing for the camera in contemporary cheesecake mode that owes a lot to music and exercise videos, advertisements, calendars and soft-core porn. The pictures she takes are purposely ‘bad’ (another subliminal wordplay), but they’re really just a pretext. It’s what comes next that gives her work its punch: she invites middle-aged men (found on Craigslist) and invites them to fondle the pictures with inked fingers. But what they see is not what they get. “I want to be the one who’s hunted,” Nakadate explains, “[but] I also like the idea of turning the tables – the idea of them thinking that they’re in charge or that they’re in power and they’re asking me for something and then I turn it on them, where I’m the director and the world is really my world.”