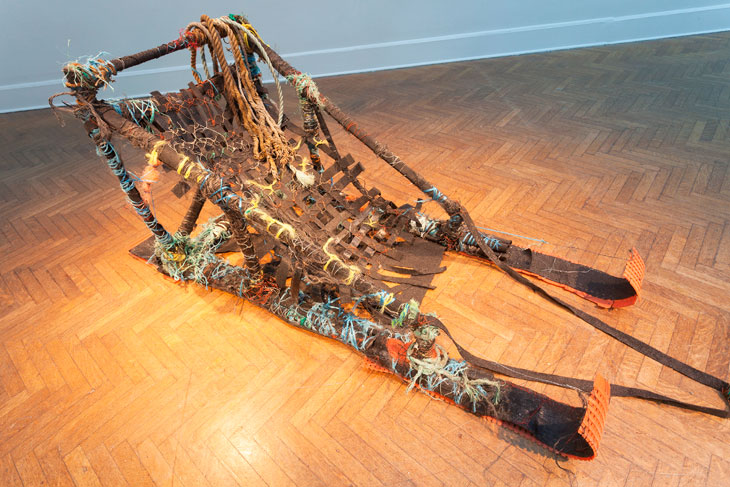 Mia Feuer
Dog Sled
2013
Tar paper found outside of an abandoned Arctic coal mine, petroleum trash collected form the Arctic Sea and from the shores of Arctic Fjords, built on the deck of a three masted tall ship while sailing the Arctic Ocean during the season of the Midnight Sun
4' x 7.5' x 2.5'

The work Dog Sled came after a period of research on the Canadian tar sands and Arctic coal mines. Built in the Arctic environment itself after conversing with her guide about the relative difference between traditional dog-pulled sledge and new snowmobiles, Dog Sled is constructed out of petroleum waste, which when displayed outside the Arctic itself begins to sag as the constituent pieces variously thaw. In this she positions herself as an artist who believes passionately in the transformative potential of art; It is important for contemporary artists to create work that provokes dialogue, asks questions and responds to the times in which they live. Finding herself a part of what has been termed the Anthropocene – a time in the earth’s history in which human actions shape the planet – her work has explicit ties to the impact of our actions upon our environment.