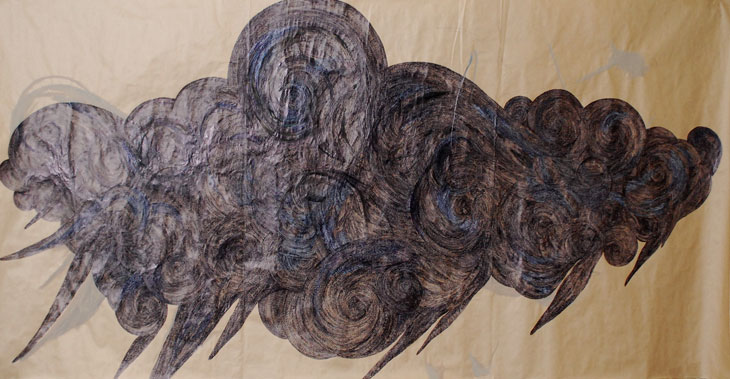 Like steam, smoke and vapour trails, the abstract shapes in Roman Savchenko’s ballpoint pen drawings depict formations that appear to be self-generated, ominously curling out of themselves.

Savchenko, whose practice also encompasses performance and dance (under the name Roman Ass), provokes a visual tension from what might first appear to be no more than simple, Rorschach-like randomness found in a sketchbook. Many of his drawings are dominated by floating shapes lashing out from the centre of otherwise empty brown sheets of paper. His obsessively patterned motifs are often outlined in a darker colour and placed asymmetrically over contrasting, painted pseudo-architectural edges, with which they almost fuse or combust.

Verging on the figurative in their dynamic, comic book-like detail, the shapes can tempt the viewer to project a kind of meaning or logic onto them, despite an awareness of their doodle-like quality.

Cloud is a large-scale mixed media drawing depicting a sprawling, horizontal mass made up of individual, rolling clusters and sharp lashes pointing downwards. Lightly painted in patches, it’s been mostly worked over with swirling ballpoint pen strokes; the paper’s worn, wrinkled surface is evidence of this repetitive action and suggests the drawing as a document of the artist’s performance-like process.

The cloud, self-contained, looming and dark, stands as an obvious symbolic presage of an impending storm, but it reflects a moment of tension and transition in more ways than one. It’s on the brink between abstraction and figuration, and between referencing a pre-existing visual culture and birthing its very own language.