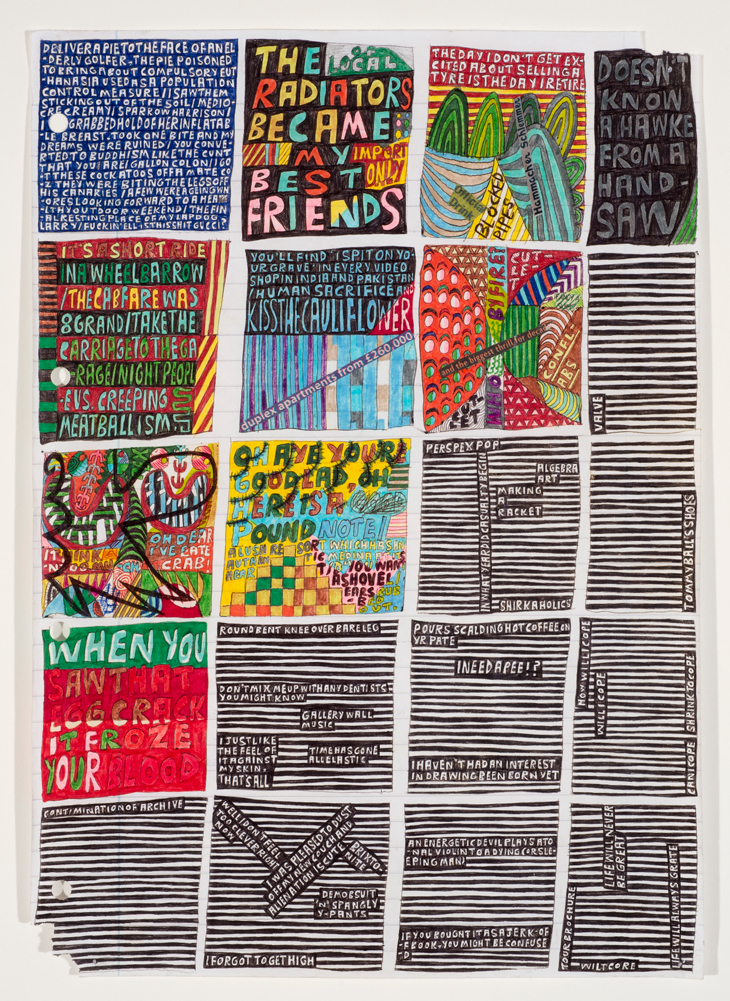 CHICKEN IN A BASKET. OUR SURVEY SAID. IT’S NOT EASY BEING A DOLPHIN. In Steven Lowery’s drawings, snippets of overheard language crash and slide together, trying to squeeze each other out of the picture. Fragments from stand up routines run up against slogans from adverts; conversations overheard in the post office queue or in the pub share space with song lyrics and mad neologisms. The effect is one of visual noise, compounded by Lowery’s blazing, psychedelic palette, somewhat comparable to 1960s rock posters that aimed to find a visual correlative for the trippy tunes they sought to promote.
Lowery has discussed the influence of music in his work, from the free jazz of Ornette Coleman to the free form rants and non-sequiturs of The Fall’s Mark E Smith. The atmosphere in Lowery’s work, though, as in some of The Fall’s records, is one of overwhelmed and exhausted despair.
ANY OLD CRAP IN ANY OLD ORDER, says one line, like the perplexed words of a critic spat back in furious sarcasm. One work, Fulcrum Grafter Masher, is dominated by a line from Tony Hancock’s suicide note: THINGS JUST WENT WRONG TOO MANY TIMES. That might be a way of summarising what Lowery calls his “desperate dissatisfaction” with the world of popular culture (“hate-fostering tabloids, listless reality TV”), but it’s also a disingenuous attitude: there’s a wild creative energy driving Lowery’s work that might be called, though cautiously, a celebration.