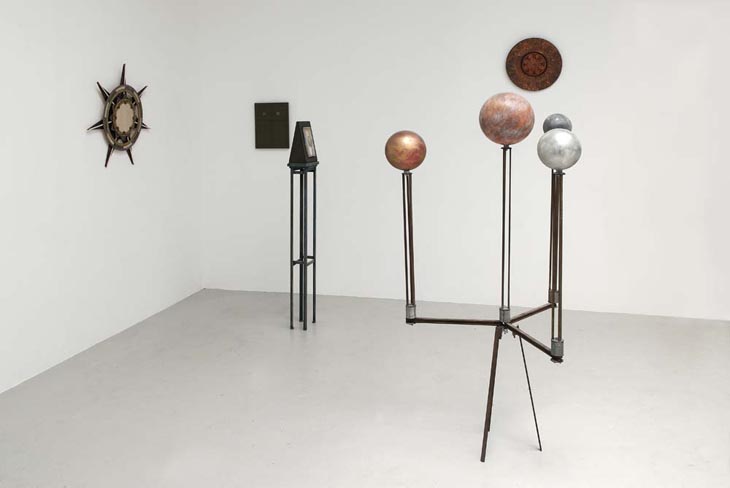 Tim Ellis’s unique approach to art-making crafts a ubiquitous logic from the haphazard and coincidental. By drawing mental and tactile relations between materials and subtly altering their forms, Ellis highlights a sensitive interlacing between artifice and natural order. In Ellis’s work found objects such as plates, vases, and Christmas tree ornaments are reconfigured to become assemblages of totemic significance. His practice revolves around his idea that “a being has a primeval desire to want to belong to something greater than oneself. This ‘wanting to belong’ manifests itself in both the production and consumption of cultural artefacts. Whether in isolation or as a collection, artefacts are dependent on a creator, mediator and audience. My work juxtaposes a culturally diverse collection of objects questioning their value and original purpose. The viewer is forced to engage in the notions of value, authorship and display.” Ellis often treats his readymade components with slight interventions, such as faux finishing bric-a-brac so they appear as more stately materials, or editing motifs to co-relate to other objects in the group. Through these minute alterations Ellis strives to engender his work. Conceiving each piece as male or female, he fabricates an instinctive harmony or ‘genetic bonding’ through the objects’ aesthetic handling. In his museological presentation, paintings are completed on pillowcases, and elaborate stands are designed at both plinth and kitchen countertop height, some replicate Victorian plant stands; blurring the domestic and exotic, their familiar scaling becomes a template of karmic measurement. His sculptures, which stand in as archaic transmitters, receive and refract all the various elements from their mysterious towers: Chinoiserie and Delft pottery, Viking shields, alchemical orbs, and trade union-like banners, prized relics both real and fake, all speaking the same cryptic language of universality and timelessness.