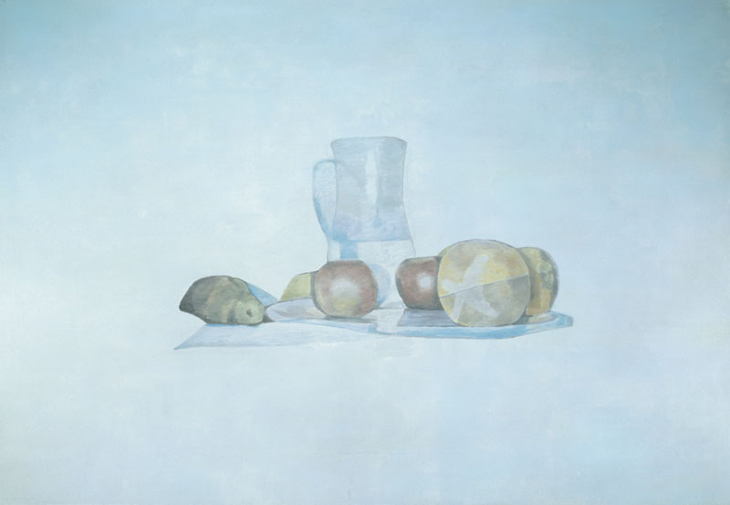 Exposing the gap between represented image and historical event, Luc Tuymans’s paintings delve into the inner workings of how mythology is created. The reality of Luc Tuymans’s work is almost ’twee’, pleasing images of a lampshade or leopard-skin rug pass quite comfortably as aesthetic totems; it’s only their cognitive association with the Holocaust, or atrocities of the Belgian Congo, that encapsulates the true banality of evil - the unspeakable horror in a teacup, the monstrous potential of an empty bath. Luc Tuymans’s paintings consciously fall desperately short of the iconic, becoming vestiges posed as counterfeit emblems for that which cannot be conveyed.

Still Life is a monument to this inadequacy of language. Made initially for the 2002 Documenta, Luc Tuymans was expected to present paintings of images relating to 9/11 to coincide with the exhibition’s theme of political and social engagement. What he decided to show was a giant still life. The sheer scale makes the contemplation of this painting almost impossible: a vast canvas representing an absolute nothingness. Luc Tuymans chose the subject of still life precisely because it was utterly unremarkable; a generic ’brand’ of ’object’ rendered to immense scale; it is banality expanded to the extreme. The simplicity of Luc Tuymans’s composition alludes to a pure and uninterrupted world order; the ephemeral light, with which the canvas seems to glow, places it as an epic masterpiece of metaphysical and spiritual contemplation. In response to unimaginable horror, Luc Tuymans offers the sublime. A gaping magnitude of impotency, which neither words nor paintings could ever express.