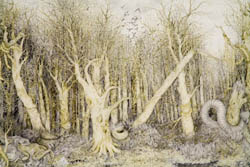 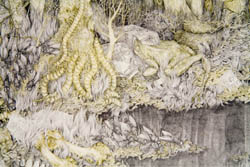 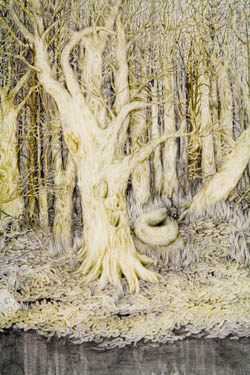 Aurel Schmidt’s Body Swallows World is inspired, in part, by Théodore Rousseau’s The Forest in Winter at Sunset (c1846-67) in the collection of the Metropolitan Museum of Art in New York, where the artist lives and works.
Rousseau’s painting– a huge and gloomy autumnal scene, with complex interlacing of tree branches and roots – provided a template for Schmidt’s investigation of landscape as both external terrain and projection of the inner life of the body. Taking its title from Mikhail Bakhtin’s 1940s book Rabelais and his World (in which the author discusses the carnivalesque, a chaotic celebration of bodily sensuality), Schmidt’s work treads a fine balance between the grotesque and the refined. A meticulously rendered sylvan scene of dense woodland at the edge of a still lake dissolves into teeming life on closer inspection.
That delicate forest floor in gentle ochres and greys is, in fact, a carpet of squirming maggots; what looked like a tree stump is a huge curl of turd, with inquisitive fly; fat, intestinal caterpillars dangle from the branches, like anacondas. As an allegory of worldly decay, Schmidt’s work embeds the horror of human decomposition in an image of its opposite: the bucolic, regenerative landscape of Rousseau’s Romantic escapism. But Bakhtin’s carnival is here too: there’s a wild and gleeful celebration at the heart of Schmidt’s work, with its festoons of squiggling creepy-crawlies standing in for streamers and bunting, a party at the end of the world where no-one gets out alive.

Raw Energy, With a Girly Side
February 23rd 2011, by Irina Aleksander, The New York Times

AUREL SCHMIDT, the mixed-media artist, was in her East Village studio apartment, running her fingers over a patch of black hair that had been pasted to the head of a stick figure drawing.
“This is my boyfriend’s chest hair,” said the 28-year-old, with her trademark side-swept blond hair and exaggerated round glasses. “No, wait,” she said, correcting herself a moment later, as she pointed to another drawing, this one with human hair for eyebrows. “This is my boyfriend’s chest hair.”
And who can keep it all straight when Ms. Schmidt has built a career out of assembling the detritus of her louche life — coffee, lipstick, Corona bottle caps, Winston cigarettes, crushed Modelo beer cans, Hershey Kisses, Klonopin capsules, Trojan condom wrappers — and turning it into art.
Her latest series, “Drug Voodoo Dolls,” covers the walls of her apartment, a tiny rectangular space with grated windows and nowhere to sit except for a vintage school desk. A hybrid of childlike sketches and found objects, the series is a joyful reminder of the crude energy, at once repulsive and cute, that caught the attention of Jeffrey Deitch, who handpicked her for a solo show in 2008, and the Whitney Museum, which featured her in its Biennial last year.
Ms. Schmidt has been described as the little sister of the rebellious downtown art scene, fathered by self-indulgent bad boys like Ryan McGinley, the late Dash Snow and Dan Colen. Ms. Schmidt indeed makes loose references to those artists’ masculine work, like Mr. Snow’s semen-covered news clipping and Mr. Colen’s graffiti-sprayed phallic boulders.
“I kind of wanted to use some of their methods but make it girly,” said Ms. Schmidt, sitting cross-legged on her bed, in thermal long johns, a navy sweatshirt and wool socks. Instead of covering a canvas in semen, she draws the male anatomy in pastel tones, sprouting delicate flowers. “The act isn’t violent, but very loving,” she said.
As with her art, it can be difficult to tell which parts of Ms. Schmidt are sincere and which are meant to be a clever comment, a joke that we’re all missing. Her big round glasses seem more like a parody of the tired geek trend than the thing itself.
Likewise, the abundance of semi-nude photos of her (like the one used as a background on her Web site, aurelschmidt.com) are, according to Ms. Schmidt, not to be taken literally. The same goes for the pantless photos of her taken by Olivier Zahm, the editor of Purple magazine.
“It’s meant to be juxtaposed with all those photos of girls lying on the carpet of the Standard hotel with their heels on,” said Ms. Schmidt, referring to a recurring image of Mr. Zahm’s Purple Diaryblog.
“If I am being purposefully sexy or sleazy in photos,” she added, “I’m doing it in a very self-aware way. People say if you want to be taken seriously as a female artist, you shouldn’t do that. So I’m like, ‘O.K., I’ll wear a pink dress and show my vagina.’ ”
Ms. Schmidt’s contradictions, playfully mocking the things that make up her world — the downtown boys’ art club, popular fashion, Mr. Zahm’s naked girls — are perhaps indicative of her efforts to appear as an outsider, even as some of her works sell for upward of $25,000.
She refuses to sign with a gallery, a decision she made after discovering the pitfalls of having too much success, too fast.
Ms. Schmidt, who is from the industrial city of Kamloops, British Columbia (her father is in construction; her mother works odd jobs), moved to New York in 2005, into a $350-a-month sublet in Bedford-Stuyvesant, Brooklyn. She worked the door at the Delancey, a bar on the Lower East Side, and at Ina, a vintage store in SoHo.

Remember when New York City was a place where the hopeful, the talented, and the lost came to get found, live cheaply, and become great (not just rich) artists? Well, it hasn’t seemed like that kind of place for a while, but a new young art scene is emerging in all the boroughs that is more excited about the city streets than the white walls of Chelsea.
Aurel Schmidt
Age: 25. Hometown: Kamloops, Canada. It’s a pulpmill city. Currently resides: East Village. Medium: Drawing. I would like to get into photography—but last year I said I wanted to get into sculpture, and I ended up throwing all my work in the garbage. What are you currently working on? I’m taking a break from showing to concentrate on making work without any pressure from anybody. I’m sick of having my work go out the door and never seeing it again. What’s your studio like? I just moved out of my studio, which was three times the size of my apartment. I had been sleeping and eating there, but now I’m working out of my house, and everything is covered in huge sheets of paper. When people come over to see my work, I say, “It’s in my bedroom, and I’ll buy wine,” which always sounds erotic. Artist hero: For now, Nan Goldin, because she wears her heart on her sleeve. She never tried to separate her life from her work. It changes as she changes. If you could change one thing about the art world, what would it be? Haters. Street artists who hate artists who make money. Conceptual artists who hate painting. Painters who hate conceptualists. Lowbrow people who think the highbrow are shitting on them. You can hate art in general, but if you’re in it and hating, you’re like a dog chasing your own tail. Do you want everyone to be like you? Fill in the blank: The young New York art scene is in transition. Artists want a change and feel something big is about to come together, but can’t quite see what it is yet. We’re in the eye of the storm.

Time, care and detail are the first things that come to mind when looking at Ms. Schmidt's work. It's as every crevice of one of her pieces is filled with something for the eye. Painstaking attention to every detail is spelled out in each of her lines. From the anatomy of the common housefly to the fanciful tail feathers in Peacock the images look as if a slight breath would fracture the serenity of their moment. While fancy is one aspect of her work realism plays an equally important part.

After seeing her work on Tim Barber's Tiny Vices I became an instant fan. After doing a little internet research and poking around in her FBI file I contacted her and conducted the following interview. I hope a gallery in the Bay Area brings her out here at some point. Because I have a feeling that her work is even more impressive in the flesh.

Lets start with the basics; what's your full name, where do you live, and how old are you?

Have you lived there a long time?

I have been in New York for a year, but I live out of a suitcase, so I wouldn't say that I really live anywhere, I more live where-ever.

Medium:
Pencil crayon, pencil and acrylic on paper. Ranging in size from 15"X15" to around 40"X60". "The end" is 4ft X4ft acrylic on wood panel. Most of the insects are drawn life size or slightly larger.

How long have you been doing arty type things?

As long as I can remember. When I was a teenager I was making very angsty detailed drawings on all sorts of wonderful satanic themes. I drew everyday, I loved it so much. Then I got really embarrassed of them, I hid them all under the bed at my mothers house. Now I have come full circle, I draw rotting corpses all day, I have never been happier.

How do you make a living?
It's a secret.

How much of your income comes from your trucker hat business?
I gave that up a long time ago.

Why did you move from Canada to NYC?

I was living a really charmed life in Vancouver. Everything was perfect. I needed to make life more difficult. I wanted a challenge, to try new things, meet new people.

Why New York?
It was the only place I knew anyone else. I also wanted to be around museums and galleries, until I moved here I had never seen a 'masterpiece' in real life. Needless to say, the first time I went to the Met it really blew my mind. It changed everything.

Is your work all hand done? Or do you use any computer tools to help out?

It is all "hand done." When you see them in real life it is pretty obvious.

Do you smoke weed? I only ask because your work has a stonerish quality to it.

I don't smoke weed. But if you want to you can.

Depending on the size, how long does each piece take?

Do you paint? Or is your main focus drawing?

Drawing is my first love, but I would never be content to do one thing, I love ideas too much. I like to make ideas not pictures, any form will do. The zombie series that I am working on now will be drawing, sculpture, and some appropriation photography. I am about to embark on this really intense sculpture project over the summer. I am going out into the bush for four months, I am going to build my own kiln, and kill snakes and mice and insects and cast them. Zombie sculptures. Like the drawings but made of wax, or ceramic or something, I don't even know yet! I know what they look like in my mind, but I don't know how to make them yet.