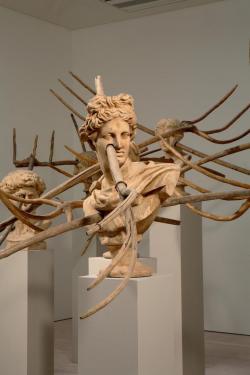 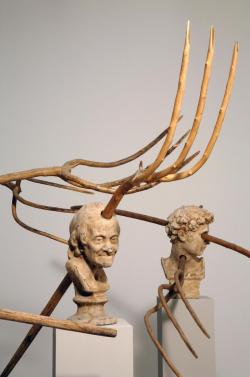 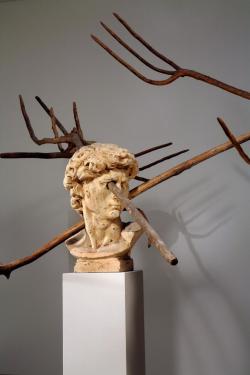 Bai Yiluo works often incorporate photography and traditional sculptural techniques, media disparate in their ancient and contemporary connotations. Bai draws upon these to develop installations which reflect the human condition as a cyclical struggle, torturously beautiful and poetically triumphant. Bai’s Civilization is a haunting monument enshrining imperious power as a corrupted vision built on labourers’ toil. Made from terracotta, classical busts pose as emperors and slaves, pierced through and defined by agricultural tools, a life force and bane. Set upon twelve individual plinths, Civilization bridges reference to both Eastern and Western spiritualism, while its violent form suggests revolution, conflict, and rebirth as the isochronal quality of nature. 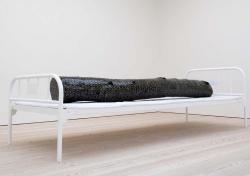 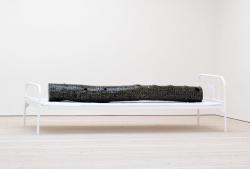 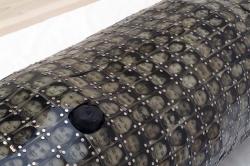 Mixed media (carved tree/hollowed out inside, encased in 2000-3000 black and white standard id card photos, with lacquer coating, laying on an elongated hospital bed designed by the artist)

In Lay Down (Hospital Bed), Bai uses a tree trunk as a symbolic form: of life, nation, culture, people. Hollowed out and ‘mummified’ with thousands of identity card photos, the log is placed on an elongated hospital bed, a sickly altar denoting hope and loss. Coated in lacquer, Bai’s sculpture exudes a regal presence in its decline, its quiet puissance and beatific aura reminiscent of sarcophagi effigies. The photographs are arranged in an interlocking pattern referencing lamellar armour (a design associated with the Zhou dynasty), each intimate portrait anonymously contributing to the power and strength of the whole.

BAI YILUO'S "FATE NO. 4" AT GALERIE URS MEILE
A Review by Xenia PiĂ«ch from the Journal of Contemporary Chinese Art

A visitor stepping into the Lucerne exhibition space of Galerie Urs Meile, Switzerland, between August 25th and October 20th 2007 would have immediately been overcome by an atmosphere of reflective solemnity. There, in the middle of the meditative whitewashed walls, set on simple white cubes placed on top of an unassuming concrete floor, the six sculptures making up Bai Yiluo's "Fate No. 4" (2007) series lay in state. The mixture of natural sunlight and spotlights make the sculptures radiate with a supernatural glow, imbuing the static materials with eerie liveliness.
These almost life-size sculptures of mixed media (fiberglass, copper wire, Giclee prints and resin) - each measures 215 x 83 x 33 cm - are the product of an artistic journey. For the past few years, Bai Yiluo (b. 1968) has been searching for a way to transform the symbol-laden forms of the traditional Chinese jade burial suit into a photographic sculpture. The earliest, though still two-dimensional, components of Fate No. 4 can be found in the artist's 2001 series "People", while works such as "Sofa" (2003), "Weight of People" (2004) and "Shell" (2004) can all be seen as three-dimensional pit stops on the road to "Fate No. 4".
The meticulousness of "Fate No. 4" is reflective of the three-year process in which Bai Yiluo worked through various computer simulations and sculptural trials in order to arrive at the final three-dimensional work of art. Bai replaced the small jade plaques of a traditional burial suit with individual black-and-white passport photographs representing a random set of people who used the photo-booths that were set up on public squares for this purpose in the artist's hometown, Luoyang, Henan Province. The photographs are sewn together in a traditional cross-stitch fashion using a copper wire to simulate the gold threads traditionally reserved for imperial burial suits.
Aside from the series' aesthetic power, "Fate No. 4" also plays with a variety of conceptual tensions. The juxtaposition of anonymity and individuality, of the masses and the elite, of contemporaneity and antiquity stands at the forefront of this work. While jade burial suites -the most spectacular artifact surviving today, made of 1,203 pieces of jade and 2,580 grams of gold thread, is from the tomb of Prince Huai of the Western Han Dynasty (206 BCE â€“ 24 AD) - were traditionally reserved for the Chinese nobility, "Fate No. 4" challenges elitism and underlines the importance of the common people. Through the format of the portrait photographs, however, the masses no longer remain anonymous but assert their individuality. In one sculpture one can even find the artist's own portrait.