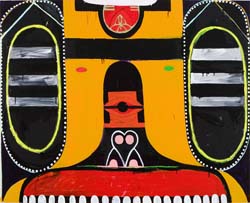 Influenced by tribal and folk art, Baker Overstreet envisions a primitive abstraction reflective of contemporary zeitgeist. In totemic compositions of bold colour and stylised patterning Overstreet develops his own painterly lexicon comprised of personal symbolism and gesture. Through their atavistic formalism, Overstreet’s symmetrical arrangements create deceptive pictorial fields: Rough scrawled lines and blocks of vibrant hue evoke fleeting suggestions
of figurative or architectural form, creating moments of recognition only to be devoured by the urgency of the paintings’ surfaces. 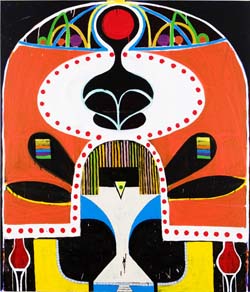 Using abstraction as a means to negotiate between this internalized and externalised perception, Overstreet’s paintings evolve as contemplative planes of contradiction. Thick gooey swatches of impasto are juxtaposed with wandering drips, hurried markmaking, and defined geometric forms. Areas of patchy tincture battle to dominate their visible under-painting, while tonal perspective is skewed, as each individual shape tries to extrapolate itself from the flatness of the picture plane. Overstreet’s paintings evolve as instinctive and raw sentiments; eliciting a faux-naïve charisma his paintings bridge the gulf between primordial ritual and modern excess. 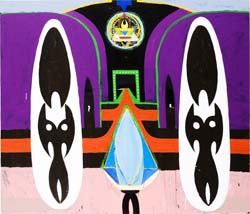 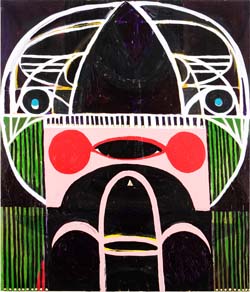 Conveying undertones of Art Brut, outsider art, and graffiti, Overstreet’s large scale canvases offer contemporary ‘folk’ painting as something equally primitive and commercial. In Hot Mic, his deistic figure stands with the frivolous authority of a logo, a self-styled brand of carnivalesque dumbness. Rendered in bigtop red, white, and green, the trippy patterning blares mesmerizingly against a ground of layered and shifting blacks, giving the painting’s benign motif a sinister dimension. 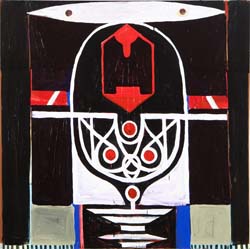 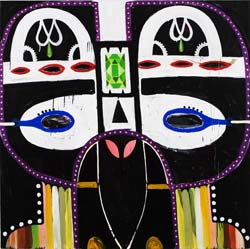 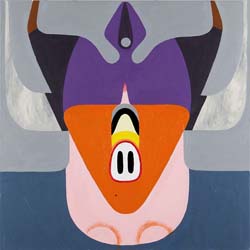 Latex and acrylic on canvas 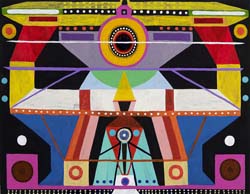 Acrylic and latex on canvas 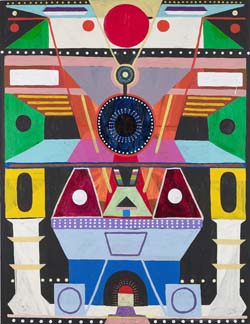 Acrylic and latex on canvas

Overstreet’s The Continental Bathosphere maps out a crazy architecture. Rendered with all the gaudiness of a casino, his composition’s impossible physics are precariously founded over a
heavily built up surface. As planes of colour approximate flatness over the remnants of drafts beneath, their raffish tones compete for spatial dominance by reverberating in and out of depth,
furthering the disorientating effect of Overstreet’s topsy-turvy perspective.


Thereâ€™s something buried in these paintings, hovering at the cusp of recognition. Itâ€™s a fleeting something or other that at times appears as parody, and at others as a sincere meditation on the medium of a medium (or market gone mad?), and it hits home in both contexts. It isnâ€™t a distanced insiderâ€™s position in the least; the sensation you get feels more like watching a dollar bill getting sucked from your fingers into a slot machineâ€”followed by that moment of melodious idiocy as you yank down its arm.

Overstreet is a young artist who received his MFA from Yale in 2006. The paintings in this show all have a loose and crude formality. Nothingâ€™s sloppy here. On the contrary, things are quite orderly and neat in their looseness, with aesthetic allegiances to artists like Rodney Alan Greenblat, Richard Lindner, and Alfred Jensen. The compositions are played out on black or dark gray grounds where pattern, symmetry, and a barrage of blinking colors from across the spectrum tumble into odd machineâ€”or altar-like forms. Sometimes faces and mystic orifices shimmer forth and then fade back to rudimentary pigment on canvas. This indistinctness is paramount.

Take Overstreetâ€™s, â€śThe New World Symphony (For the Elite Ark),â€ť 2008. Itâ€™s a stacked, symmetrical composition suggesting four shallow interior spaces whose exact structure is vague at best. Intermittent, wobbly groups of dots play around the paintingâ€™s clashing perspectival cul-de-sacs and blocks of loosely articulated hues. The composition straddles the thin line between formality and informality, grace and vulgarity, meaning and meaninglessness so effortlessly that it keeps me anchored, with the shelf wheels and coin chutes of the mind reeling and ringing, playing the odds of our cumulative experiences.


Baker Overstreet's paintings rely on an aesthetic that is rooted in folk and primitive arts. He employs unbalanced symmetry and ornamental patterning to make emblematic compositions that define human or architectural figures while subverting familiar form. This inherent contradiction (between the familiar and unfamiliar, the worldly and other worldly) creates a space where individual elements clash.

The resulting phenomenon allows for an altered state where the specificity of an image gives way to something open and universal. These paintings are a record of that shared commonality.