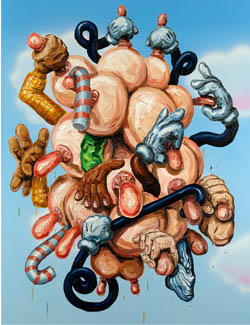 Barry Reigate’s riotous canvases are pop porn at its best. Envisioning a Russ Meyers-like heaven, Reigate’s paintings disseminate a hilarious bachelor night bravado, where disembodied breasts, party favourites, and cartoon ephemera become the objects of satiation for fumbling, letchy Mickey Mouse hands. Presenting the macho fetishism of painting with a humorous twist, Reigate embraces the abjection of Philip Guston, George Condo, and Sean Landers; his debased subject providing a critical allegory for art historical attitudes as well as current cultural zeitgeist.
Merging the seamless gloss of graphic design with the integrity of expressionism, Reigate’s jumbled compositions celebrate great painting as much as the fine art of titty groping. Executed over ultra-flat airbrushed skies, masses of gargantuan breasts are monumentalised and given tangible weight through thick, creamy impasto, formally interspersed with colourful motifs of comic folly. Equating the act of painting itself to a certain depravity, Reigate revels in executing squiggly brush marks, phallic smears, and generously indulgent highlights, ensuring the viewer knows every inch of his canvas has been thoroughly man-handled.
In sharing his own mammophiliac predilections, Reigate approaches high art production with an earnest dumbness, enshrining the most basic instincts of desire and horror in all their awkward, puerile, and embarrassing glory. Reigate revives the primitivism 20th c. artistic inspiration and the ghetto-ised attitudes of cultural hierarchy as a zombie-esque parody, creating his own numina, monsters, and totems from the seedy juju of contemporary schmaltz. 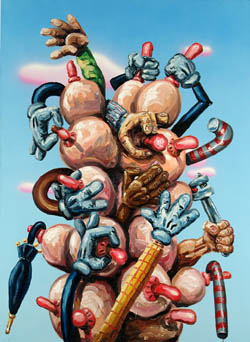 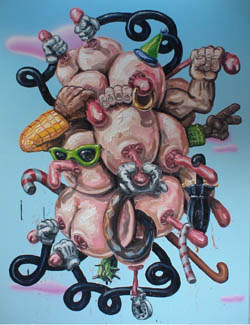 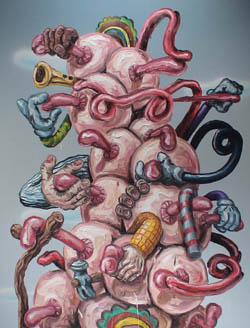 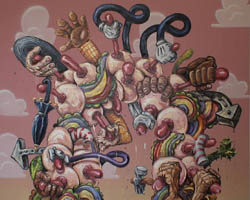 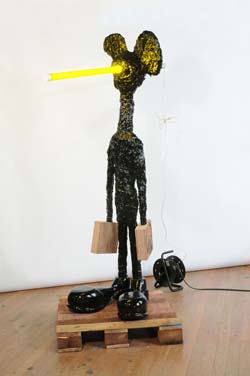 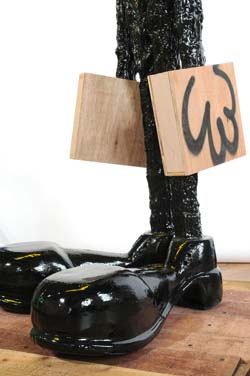 Barry Reigate
Snatching Defeat from the Jaws of Victory

Barry Reigate’s sculptures and paintings enshrine the most basic instincts of desire and horror. Reflective of the aggression and violence of working class stereotype, Reigate adopts a brash, ‘no-apologies’ attitude towards the levelling of cultural hierarchy. Using loaded signifiers, such as Mickey Mouse minstrels and the hedonistic decadence of 80s Memphis design, his work ironically revives the ethos of ‘primitivism’ and the edgy indulgence of the neo-geo period to construct darkly humorous parodies of today’s attitudes towards commodity, fetish, and cultural taboo. His use of controversial subjects serves to underscore the hypocrisy that surrounds issues such as sexuality, race and class. “To want to do something about society’s political mess in art seems a bit apologetic in that it needs a validation.” Reigate divulges. “What I’m interested in is this ‘going nowhere’ against progress: an energised apathy, which expends itself through art production.” 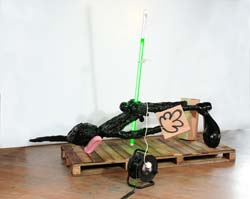 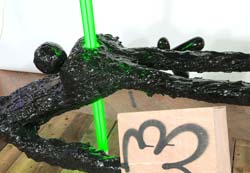 Barry Reigate
Triumph In The Face Of Adversity

Reigate’s series of fluorescent light sculptures were conceived as one-of-a-kind art and design originals, functional furniture catering to connoisseurs of unmitigated indulgence. The lamps are ostentatious pastiches of bad taste, pierced through (literally) with the pretentiousness of minimalist design. Triumph In The Face Of Adversity repackages all manner of anathema as a luminescent beacon of desire: the club-footed, rude-fingered, pudenda-lipped, tar-baby bunny is sodomised through the core by a ‘Dan Flavin’ and poses as a depraved icon of astounding beauty and fascination. In wholeheartedly embracing the abject, Reigate confronts and seduces the viewer with his own ethical hang-ups. “I like the simultaneous reference to cartoons and modern art over the last century,” says Reigate. “While modernism grew, cartoons consumed the very essence of transcendental popularity.” 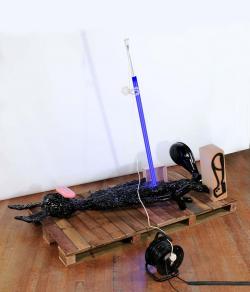 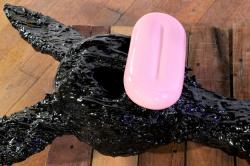 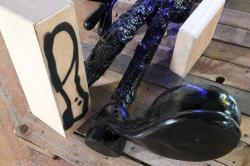 Barry Reigate
I'm a Leader not a Follower (and details)

“Modernism seemed to want to serve some kind of a purpose, and I wanted to play with something that deals with both function and stupidity. I became quite interested in Barry Flanagan’s hares; they were everywhere, breeding like rabbits. Barry went pop, so to say, commercialised; so there was this kind of entropy of his or others’ modernist ideals.” Reigate expands, “The figures are made in jesmonite which is used in film sets and models. I like the association between classical plaster sculpture and popular culture. I let the material just drip, applied it thickly and then let gravity take its course, so there is this historical reference to modernist painting. The black gloss paint makes the figures look as though they have just been tarred, like a kind of punishment for pop. The wooden pallet-plinths almost look like Dracula’s coffin: dead art, zombie pop! The extension cord becomes a kind of life support for them to work: an umbilical cord attached to our own dependent reality, electricity.” 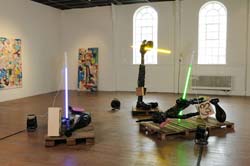 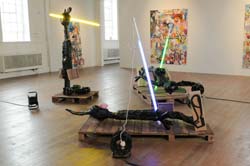 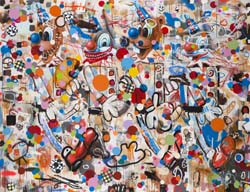 “The dumbness is from too much knowledge,” Reigate perceives, “an apathy from too much info. Because of information and imagery, we all have loads of input about stuff we don’t ever experience, like zombiefied conduits of information. All this info goes into the paintings. Layer after layer of collage, drawing, crayon, airbrush etc… Just stuff on stuff, then sealed and more stuff put on top of other stuff. Making work is a kind of expenditure for this ‘stuff’. When I make a painting it may refer to moments in art’s history, but I did not do that consciously. It’s the energy of apathy kicking in. I’ve seen Guston’s books, read about Basquiat in journals, Googled Condo, seen Jeff Koons on TV, paid to see Paul McCarthy online, looked at Magritte’s ‘vache’ period in libraries etc; somehow this info is going to come out, through me. My body cannot store it, there’s not enough ram, so it gets performed, transferred onto a piece of material through brush, paint, collage and whatever’s to hand.” 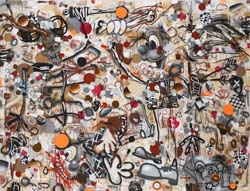 “I got invited to do a special commission for the Saatchi Gallery which resulted in Real Special Very Painting and Voracious Impotent Penis (hence the titles, takes on R.S.V.P & V.I.P),” Reigate explains. “I’m interested in cartoon imagery because I was taught how to draw by my father. When visiting him at Wandsworth Prison, my father would try to entertain me through drawing popular imagery such as King Kong, or Mickey Mouse and Donald Duck. That would be his way of communicating to me; being a kind of 70s macho man, he found it difficult to express his feelings other than through anger or violence. So there is this dysfunction already in my circuit, in relation to my artistic introduction, drawing associated with punishment and freedom. Cartoon’s main audience is children. Art, a luxury commodity, could be seen as some kind of adult toy. Something to depart from the ‘real’ world, into one of escape and play where meaning and reason slips into a different social context. In the real world you’re not allowed to be naughty, but in a cartoon world you can. You can throw knives, fall from buildings, and attempt murder.” 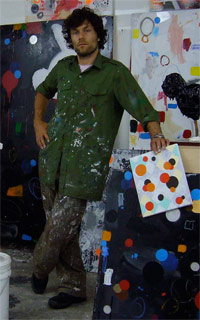 1971 Born in London
Lives and works in London

2003
Did you hear about the frog who wanted to be a prince? He went to bed and dreamed he was oneâ€¦woke up and found that he had become one. He was still a fraog. Egg Club, London