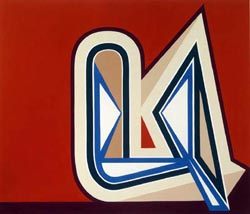 Bart Exposito’s geometric paintings don’t draw from utopian ideals or a revision of abstraction, but rather the cold neutrality of graphic design. More pop than pop, his flat pantone coloured canvases celebrate the zen-like fizz of commodified nothingness. Seducing with the plastic banality of album covers or corporate logos, Exposito’s The New Face of Smiling negotiates both aesthetics and its functions as cultural interface and lifestyle arbitration. Through his ultra-flat, airtight compositions Exposito enforces the impersonal and anonymous as a comforting numbness. 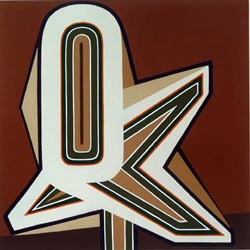 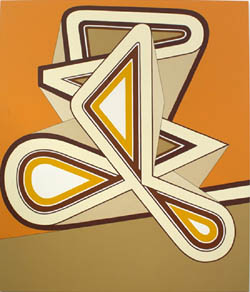 In Earth 3 Exposito’s composition defies spatial perspective. Mapping out areas with quietly undulating tones, each hue claims a hierarchical order in the field of depth, setting up a system of optical rationale for painterly subversion. Using colour as a starting point for illusion, Exposito drafts a central motif of an impossibly twisted form; its blocky three dimensional suggestion delineated by flat graphic lines and off-kilter vanishing points that constantly float between foreground and distance. 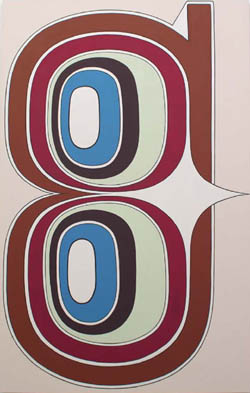 Emblazoned on the canvas in tasteful fashion tones, Exposito’s Bubble & Scrape seduces with its ultra-modern authority. Executed with a commercially slick finish, Exposito’s abstracted motif carries the weight of a design classic, cross referencing from iconic periods of the 20th c: from the geometric opulence of art deco to the space age ambition of the 60s. Reinventing these with a contemporary flair, Exposito’s work streamlines the aesthetics of desire, his painting posing as a luxuriant archetype of timeless beauty. 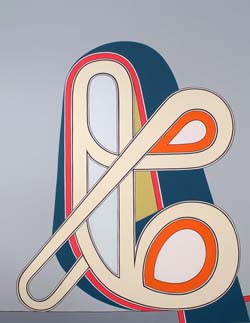 Acrylic and marker on canvas

Exposito’s seamless painting style takes its lineage from 60s minimalism, where forms and materials were pared down to their bare essence. Exposito’s bold motifs draw from the aesthetic styles of this period, combining associations to hippy aspiration and retronostalgia with their contemporary revival as design elegance, suburban chic, and commodity glamour. In Cyclo, Exposito’s curved pattern beacons with the simplified and understated power of a type-font, referencing both the subtle beauty of calligraphic contour, and the indistinction between – and complete conjugation of – form and content. 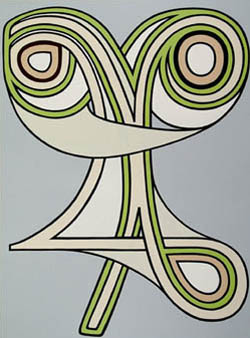 
Abstract but with glancing references to new technology and modular design, Bart Exposito's paintings demonstrate that the hard-edge vernacular has always resonated with the concept of futurity, even the futuristic (which despite its promise of what-has-not-yet-been paradoxically conveys a groovy sci-fi anachronism--Lost in Space meets Esquivel, as in Tracy Morgan's brilliant Saturday Night Live Astronaut Jones skit). When Exposito's works succeed, they create dynamic virtual movement and interrogate all aspects of the picture plane, especially the edges. When they fail-as almost all the drawings and many of the paintings do--the result is just graphic design, the kind of stylization that appears on album covers for electronica groups.

Take BME 75 (all works 2002), which presents interlocking C-shaped forms in stark white, hot red, and silvery blue; a sharky ivory is used between the white and red, but rather than create space it merely cements the Cs into a logo. Almost smugly centered on its square canvas, the image never questions its own formalization or challenges the viewer's point of view.

Compare BME 75's lazy straightforwardness with the puzzling energy of BME 78 or BME 76. It's like going from chisenbop to algebra--though the paintings remain simple. Exposito's winning palette of sky blues, desert greens, and Tupperware pinks and keen deployment of black line already earn a connection to John Wesley, who likewise achieves his dazzling, hypnotic effects with the most parsimonious of gestures and in utter flatness. How curious and promising a project that taps the student of Hokusai to investigate space-age abstraction. (Philip Guston and Giorgio Morandi would also prove intriguing antecedents in an exploration of paint's weird negotiation of representation, abstraction, and the world they exist in.)