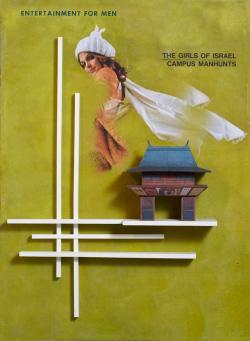 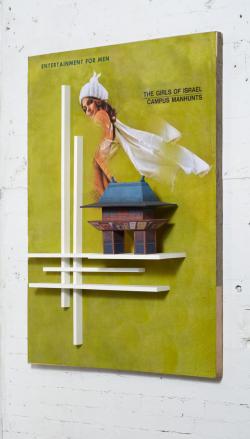 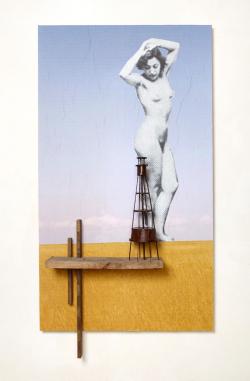 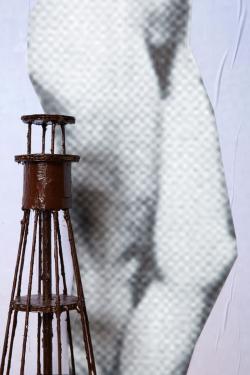 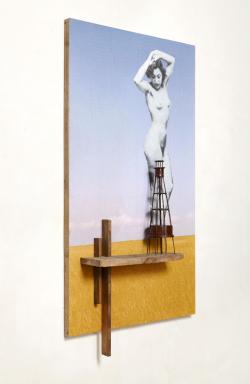 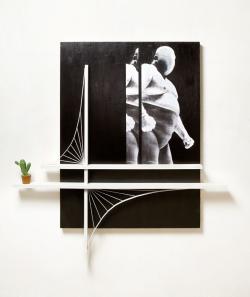 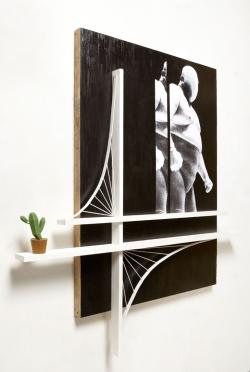 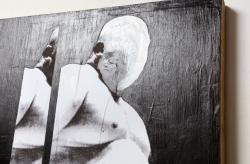 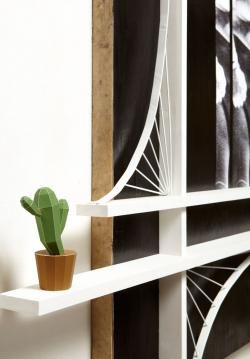 Ben Washington
Like Being In a Hospital with Just Dead People

How is it possible that time and again we are confronted with moments in which something prompts us to never forget what we saw? This question may allegorize a protestant and sober desire for intoxication. After all, intoxication can change time, similar to the moment that claims to be remembered forever.
There is drunkenness without a hangover, just like there are orgasms without sex - because the brain is a wonderful landscape, in which thousands of images appear - and one never knows when they appear. Whoever wants to view a new figure of beauty and mystery and the whispering of artefacts can - without any obligations and full of expectations - visit the Gallery Dana Charkasi - located in downtown Vienna, and admire the first solo exhibit in Austria of the London-based artist Ben Washington.
In the first room of the ŌĆ£The Private CitizenŌĆØ the viewer is greeted by the work ŌĆ£King of the RoadŌĆØ, a floating installation created in 2010. Can the road have a king? Can two heavy wooden boards linked by an iron arch, constructed with lots of blue braces, balance a palm tree with golden leaves and thereby exert majestic power? And since kings are mainly good for fairy tales, and the road is mainly good for cars: should we really wish for such a strange mixture? ŌĆ£The Private CitizenŌĆØ (2009) is positioned in the second room, and the privacy of a citizen seems free of governance. A citizenŌĆÖs privacy includes many things that are nobodyŌĆÖs business outside of the city apartment intoxication, for example, is not punishable, as long as one is not caught driving.
The freedom of being confronted with a dignified brainteaser and the pleasure of its incomprehension in real life ŌĆō is that what the intoxication of a private citizen could feel like? The individual parts of ŌĆ£The Private CitizenŌĆØ are found and common, but torn out of their habit ŌĆō an upholstered armrest, a golden-faceless animal figure, a sieve, into which blue colour was spilt, attached to the armrest with obscene orange-coloured, maybe shish kebabŌĆōsticks, and mounted on the wall with DIY-shelves. On the bottom of the sieve, and pointing sharply to the ground, there is a blue-blotted wooden pole construction, which is succinctly decorated in almost gothic arch squares. The object that is capable of all this is one whose proportions and happiness twitters like champagne bubbles on a powder light morning in MayŌĆ”. maybe.
Something like this is unusual, and Ben WashingtonŌĆÖs work is unusually unusual. And there are other objects, and a vast number of letters and dialogues and thoughts will be used to describe them. Because the predatorŌĆÖs flickering of objects never ceases when objects are united beyond their traditional language, and their whispering begins to painlessly purr in the brain.

What we call ŌĆśprogressŌĆÖ doesnŌĆÖt necessarily take the direction we expect. Sometimes, in an attempt to ŌĆśmodernizeŌĆÖ, the march of society pulls the rug from beneath our feet.
In this two-man exhibition, Marcin Dudek and Ben Washington create parallel large-scale installations. Both artists pick up on the need to ŌĆśpush forwardŌĆÖ, the need to dig or climb, but also the dangers of being swallowed up or lost in the clouds.

Marcin DudekŌĆÖs work takes as its inspiration the town of Katowice in Polish Silesia ŌĆō in the 1970s, a model industrial city, with high-rise architecture springing up from the work of the coalmines underneath. Excessive exploitation (or over-mining) undermined this success story, and the ground has opened up, slowly swallowing the city. Using little more than cellophane and tape, DudekŌĆÖs tunnel installation leads us into the hollows of the earth, with traps of light, sound and video.
Ben WashingtonŌĆÖs sculptures ŌĆō precarious, unbalanced objects ŌĆō emerge from the sink-holes and the rubble. Suspended underneath, WashingtonŌĆÖs works bring attention to the structures and systems that keep our environments and landscapes in the orientation we have become accustomed to: the right way up. The sculptures are at once architectural models, abstract mountainscapes, floating cities and stellar systems, and bring together the Monolith, video games, and holiday snaps from Costa del Sol.

This underground utopia ŌĆō a cross between the nuclear shelter and the hanging gardens ŌĆō allows us to inhabit the man-made and the natural at the same time. From here, in the safety of the infra-thin, we can touch the spaces not just in the physical, but also in the emotional and psychogeographic.

Ben WashingtonŌĆÖs sculptures draw attention to their own physicality, often holding themselves upright through precarious acts of balance, appearing at times to defy physical laws, highlighting those laws and as a result intensifying the viewersŌĆÖ relationship to the object and the space that they both occupy.
WashingtonŌĆÖs work explores the intersection between space as it exists, as it is imagined and as it is experienced. It pulls together narratives of representation, drawing from sources as diverse as historical landscape art, to modes of architecture, to the constructed world of computer games and virtual reality. By clashing these narratives and visual languages together, he creates new connections between the objects and their implicit meanings, encouraging new questions to be asked and new readings to be sought.