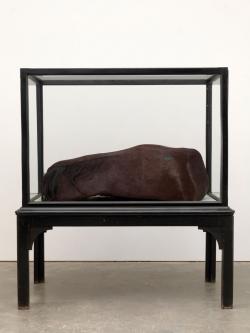 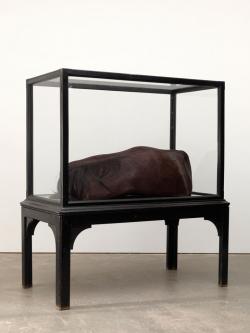 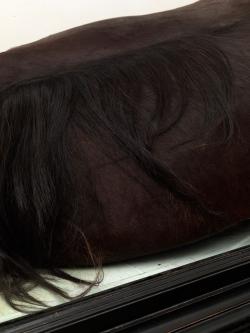 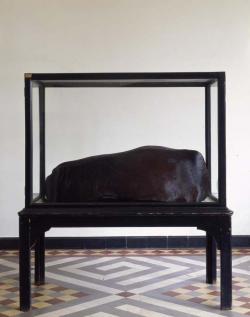 193 x 177 x 96 cm
An unsettling, reconfigured concept of the body, helpless yet contorted, takes centre stage in Berlinde de BruyckereŌĆÖs faceless sculptures. Abject deformation is turned into beauty as if the artist is trying to wrestle a shape from abstract form. That each body, whether human or equine, stands on a plinth or inside a cabinet, as if posing for the viewer, emphasises their monumentalised objecthood and the tension between what these objects represent and what they actually are.

De Bruyckere began making work around ideas of the human figure in the early 1990s, first through its absence, stacking and draping woollen blankets on furniture, symbolising shelter and vulnerability. Then she added bodies made of wax, almost completely covered in wool; imperfect, sexless and headless. 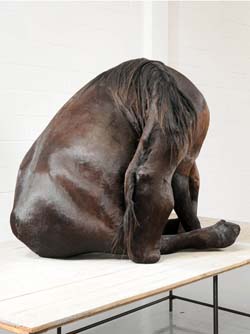 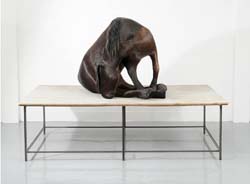 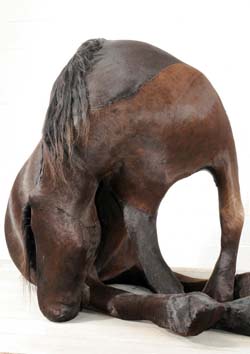 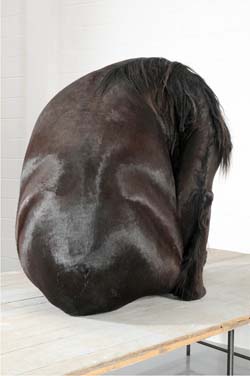 Overall size:295 x 286 x 158 cm
Their lack of eyes and sex emphasised the importance of seeing each body as a whole. A few years later she turned to the horse as subject, covering pseudo-anatomical works in familiar materials that inspire both a sense of nightmarish displacement and of visual comfort, of animal suffering and material abstraction.
The horse pieces are eyeless (K36 (The Black Horse), 2003) and sometimes headless too (K21, 2006). The glossiness of their skin underscores all of the things that are covered and hidden, a sensual, almost tender casing for these uncomfortable shapes. 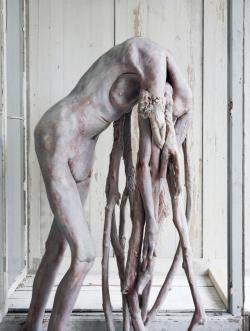 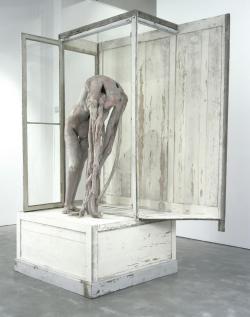 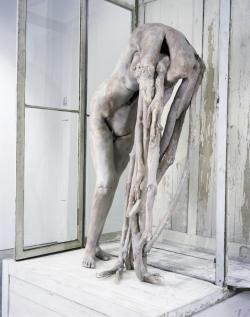 280 x 172.5 x 119.5 cm
Marthe (2008) shows a body in duality, disgusting but still half-human, a hand found in its twig-like limbs reminiscent of Ovidian-style transformation; it too, despite its lifelike physicality, is sexless, headless, inert, a re-imagined object. ŌĆ£It is not because you never see a head that it looks like it has been cut off. It is, rather, that I no longer think the presence of a head is necessary. The figure as a whole is a mental state. The presence or absence of a head is irrelevant.ŌĆØ

Since the early nineties, Berlinde de Bruyckere has been working with blanketsŌĆōwoolen blankets that cover and protectŌĆōas the material for her sculptures and installations. For De Bruyckere they symbolize not only warmth and shelter, but also vulnerability and fear. Fear that makes people crawl under blankets and vulnerability in situations related to cold, illness, disaster and war. They are the imagesŌĆōfrom Somalia, Ruanda or KosovoŌĆōwhich the media show us every day: images from hotbeds of violence which cause the population to flee, to hide or to shiver from cold. Victims are wrapped in blankets. The suffering is covered. In De BruyckereŌĆÖs studio, such newspaper photographs are present as quiet moments among the day-to-day memoranda. They are often images in which sadness and beauty seem to compete for attention.

One of De BruyckereŌĆÖs first sculptures with blankets consisted of a simple stack of folded blankets on an unsteady wooden stool (untitled, 1991). The order and balance of the stack are almost literally undermined here by the tremendously tilted base. Dekenhuis (House of Blankets) from 1993 is a metal cage over which blankets have been draped. One corner of the cage remains uncovered, but the ŌĆśhouse of blanketsŌĆÖ is inaccessible and offers only the suggestion of shelter. Berlinde de Bruyckere says the following about the use of blankets in her work: ŌĆ£To me, a blanket is a symbol of security. It has a soul, which usually has a positive connotation. A blanket tucks you in; you feel like the child sitting indoors while itŌĆÖs raining outside. I also use the blanket as a negative object. You can give someone so much love and safety that it smothers him, that he can no longer find himself. Lying under a pile of blankets can be disorienting! I like to play with that ambiguity in my work.ŌĆØ

This two-person show consisted of separate installations by Peter Buggenhout and Berlinde de Bruyckere, a married couple who live in Ghent, Belgium. She is the better known of the two, because her work in two recent outdoor shows in Holland provoked minor controversies.

In this exhibition at the Flemish Cultural Center in Amsterdam, there could be no such confusion. De Bruyckere constructed a rectangular, three-level metal-and-wood platform. Scaffolding elements protruded on three sides, as if assembly had stopped in process. The lowest level was empty.