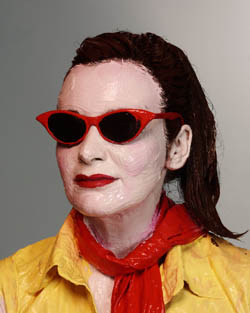 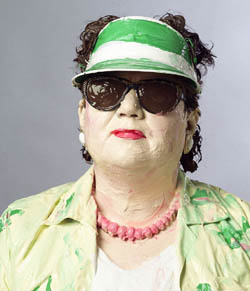 
David Risley Gallery is proud to present the first solo exhibition of work by Boo Ritson.

After studying sculpture at the Royal College of Art, Ritson has had a desire to paint, though not necessarily to make paintings. This has manifested itself in painted objects, with the applied paint enclosing the object, like a skin, recasting it as an image of itself. Her new works take this progression further, enveloping a person's head in paint.

Household paint is applied quickly and gesturally to the sitter's head, hair and clothes, covering them in a portrait of an imagined character. These are recorded as large colour photographic portraits, though they exist somewhere between painting, photography, sculpture and performance.

These seemingly simple images are layered with complexities. Who is the portrait of, the sitter or the painted character?

The armature of the sitter's face gives the characters credibility beyond the painted surface.

This work poses questions as to where art exists, and where the event unfolds. The physical event of a person having paint applied to their head and clothes and this being recorded by a camera is not the event we are looking at. The subject seems to exist in a different (fictional) time and space. We do not see the sitter but the character they have become.

Their fictional personas extend beyond the thin layer of paint from which they are constructed; the characters exist outside of their image.

It is important that these portraits are painted on to live people, that the face depicted in the photograph lives and breathes, though with a different consciousness to the actual sitter.

Boo Ritson graduated in 2005 from the Royal College of Art, London.
She has exhibited widely including London, Los Angeles, Mexico City and Amsterdam. Her work is in private collections in London, Moscow and New York.