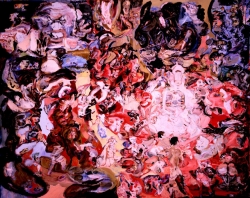 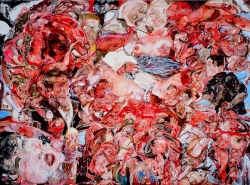 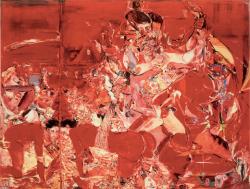 Named after the famous Doris Day film, this Pyjama Game has no intention of maintaining a squeaky clean image. Cecily Brown’s painting has all the fun of a screwball comedy. Delightfully innocent and sophisticated at the same time, a plot laid out in abstract: mistaken identity, sexual innuendo and glamorous design in 1950s red. 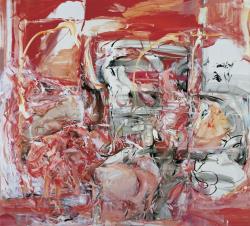 Cecily Brown
The Girl Who Had Everything

The Girl Who Had Everything is done in the fleshiest of pinks, ripe for the taking. Populated with fragments of figures as twisted and mysterious as Francis Bacon, it has all the vigour of a macho abstraction, created with a pastel decorative palette. 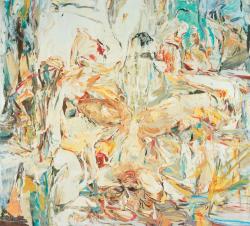 Cecily Brown's Night Passage has all the vigour of macho abstraction, with the pastel decorative palette of Monet’s water lilies, and a girlie reference to Georgia O’Keeffe. Amidst the entire lush-painted flourish, is the impression of a couple copulating. 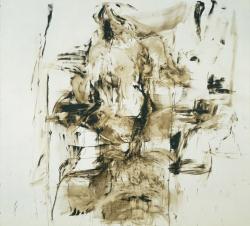 Cecily Brown’s paintings literally drip with sex. Hard, Fast and Beautiful emits a simple sophistication: wispy charcoal and white gestures, reminiscent of life drawings or underpainting, contain a more carnal impression. Cecily Brown approaches this abstraction like the aftermath of two lovers rolling around on the canvas. A highly rendered fabrication of an Yves Klein fantasy dreamed and savoured entirely from the girl’s perspective. 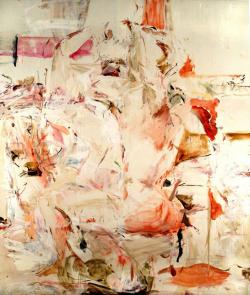 Taking its title from Tennessee Williams’s play, Cecily Brown’s The Fugitive Kind is as seductive as southern gossip. Brown uses the painterliness of Abstract Expressionism to convey not only raw emotion, but a corporeal sense of connection between painting, idea and viewer. Cecily Brown capitalises on the fleshiness of her medium: paint’s ability to replicate physical sensation: and the dramatic illusion of motion. Within her voluptuous surfaces, epic fantasies spontaneously unfold, as if each brush stroke contains a dark secret: opulent, gritty and tainted with sin. 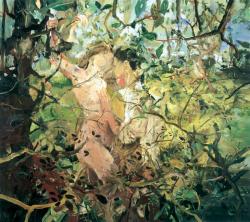 Cecily Brown’s young lovers melt into the foliage, fused into the landscape in the heat of a moment. Everything about Brown’s painting erupts with sex appeal: from the soft-porn pastel colours to the oily-wet malleability of the surface. Cecily Brown knows that desire lies in the flirtation: amid her fervent gestural abstraction, just the glimpse of suggestion is enough. 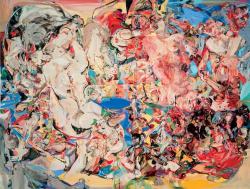 Cecily may have come riding through the door to fame and fashion with her brash titillating use of copulating bunnies and sexual posture in the same way that John Currin breached the walls of the Chelsea galleries and popped open the eyes of the cognoscenti with his buxom fooleries aka Tom H. Benton but who would'a thought a girl's hot sex could get so boring, so old so fast.not to worry.Cecily's now through the door and settled in and maybe a little bored with the frenzy, the tooling tempest in a four square canvas. Looks like she's found something to sing about, think about or wrestle with, her own personal 'laocoon'. Showing her true colors she plays to the paint and plies her trade with her hard won, strong academic training from the Slade where Cezanne's MO still reigns.and rightly so.one of the few training grounds for painters that want to move the paint around here in the 21st century. She has corralled her energies to this complex, less facile intention rather than just grabbing attention. Working furiously for the last several years she has integrated all elements in this new work to achieve an enervating balance of paint, narrative, brushstroke scale, and color to present a visual that is as mesmerizing as a walk in the woods - radiance, in sync with nature's light streaming, visual bounty. This new work is elegant improvisation, a jazz like series of tableaux. From Cezanne, the mentor projects..'The real and prodigious study to be ventured is that of the diversity of nature's picture' or capturing nature's changes while preserving it's permanence as lifted from David Sylvester's essay on Cezanne. And while we may want her to go hog wild and get us closer to the energy, and to create an expressionism with all the same power and movement of Reuben's 'Massacre of the Innocents'.well, give her time.give her time.She's calmed but way far from bored or stuck.you can still see her heart fluttering, her mind moving and the bells ringing.