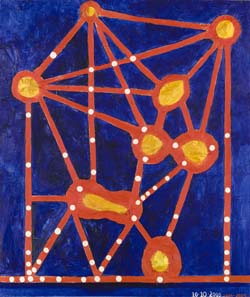 342.9 x 289.6 cm
Pushing the boundaries between the most sophisticated formalism and outsider artŌĆÖs instinctive logic, Chris Martin makes abstract painting look enviably effortless. His large scale canvases reflect a zany approach to experimentation and a methodological mode of play, conceiving painting as something intrinsically haptic that resolves from an intimately hands-on negotiation of materials. MartinŌĆÖs works are renowned for their extremely physical surfaces which are created by collaging found items onto the canvas. In Untitled, the paintingŌĆÖs texture is made from paper towels, newspaper, and acrylic gel ŌĆō a thick paint-like substance resembling liquid plastic. Over-painting these with a bold graphic motif of a constellation network, Martin references the connective processes of making, placing his topsy-turvy rationale as a field of wonder and contemplation. 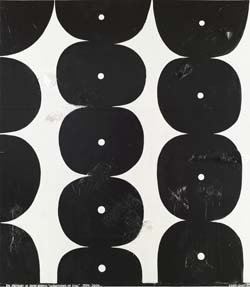 342.9 x 299.7 cm
Martin often uses pop cultural references in his paintings, paying homage to his many influences from the fields of literature, film, and music. By making the sources of his inspiration the subject of his work, Martin shares the ŌĆśbehind the scenesŌĆÖ processes of his practice, giving insight to an approach to abstraction which is informed as much by art history as contemporary media. In Memory of James Brown ŌĆ£Godfather of SoulŌĆØ is a painting which took 2 years to complete; though MartinŌĆÖs work often appears playfully spontaneous, this aesthetic is developed through prolonged reconsideration and reworking of the canvas, with some pieces taking
as much as 20 years to finish. The black and white pattern, painted over a collage, resembles both vinyl LPs and an 60s op art ŌĆō a movement whose revolutionary funkadelic stylings are a worthy tribute to BrownŌĆÖs legacy. 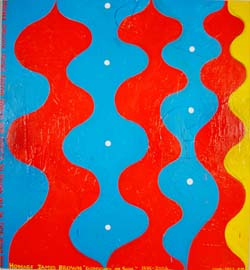 Oil and collage on canvas

Mother Popcorn takes its title from the James Brown hit which is considered to be one of the most pivotal tracks in the development of his distinctive funk sound. The text along the side of the painting: “James Brown Dances and Directs The Popcorn with the James Brown Band” (the title of Brown’s album) places Martin’s abstract motif as a stand in for pictorial narrative, the loud rhythmic pattern conveying the essence and energy of a live performance. Embedded in the surface is a 12” LP, its extreme texture and readily identifiable shape create a tactile sensation within the painting, giving the canvas a physical dynamic that extends beyond looking and taps into collective memory and experience. 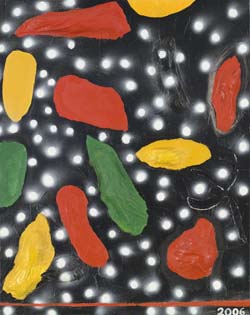 122.2 x 96.5 cm
Martin is often described as a genuine ŌĆ£artistŌĆÖs artistŌĆØ: his works are as much a celebration of creative experiment and discovery as they are exciting resolutions. Activating his studio as a ŌĆślaboratoryŌĆÖ, MartinŌĆÖs compositions arise as visual intersections or collision points where the artistŌĆÖs interests, experiences, and ideas converge. MartinŌĆÖs crude style reflects his concept of painting as speculative ŌĆśconcoctionsŌĆÖ, their casual and seductive appearance facilitating the appreciation of the intimacy of his practice. In Untitled Martin approaches painting through the devices of slapstick humour. Incorporating banana skins into the surface, he sets up his canvas as a slippery terrain of choreographed folly. Using grotty oranges, yellows, and greens against an oily black ground Martin configures his painting as an abject and spectacular universe, dotted by haloed white spots that dazzle with ŌĆśbest-effortŌĆÖ glamour.

While possessing qualities of both children's art and eastern tantric abstraction, Chris Martin's paintings engage the world. Things you might find lying around the house are collaged into the work: sponges, old blankets, bits of newspaper. The resulting bumps, creases and wrinkles give the work an emphatically handmade quality, an air of straightforwardness and humility.

In Samuel Palmer, the artist's homage to a 19th-century British visionary painter, Martin glues scraps of material onto an inky-blue, starry-night landscape with cartoon trees, making it look fractured and torn like an old pair of jeans. The dreamy otherworldliness of the scene is thus grounded by a matter-of-fact spontaneity. In Afghan Painting, a blanket is stretched across canvas and encrusted with brightly colored daubs of paint. Three pictures of frogs cut from magazines have been stapled on, transforming this otherwise ordinary bit of knitting into an unnatural habitat. The canvas peeking through the afghan adds an additional layer of meaning or memory. Martin's paintings are sociable, inclusive and eager to communicate his enthusiasms. Often signed and dated in clumsy block letters along the bottom, he sometimes includes messages to his heroes, as in Good Morning Alfred Jensen Good Morning! A writer as well as an artist, Martin, in a 2002 issue of The Brooklyn Rail wrote of Jensen that his paintings "blazed with the light of a living investigation." One could say the same of his own compositions: They are imperfect and weathered, yet vibrant and joyful.


Odd Artist Out Chris Martin's show is a living room, an ashram, and an opium den by Jerry Saltz

Chris Martin is a perennial member of the large, by nature neglected, nonetheless crucial and treasured confederacy known as "artist's artists." He's one of the dark horses and workers-at-the-edge respected by their peers who never quite get their due. Probably most artists feel like members of this tribe to one degree or another. I don't know if there's a correlation between Martin's generous-to-a-fault, almost shoot-yourself-in-the-foot selflessness and his reputation as one of the better underappreciated painters around, but his current all-over-the-place not-really-a-one-man show draws attention to his dilemma.

Picasso said, "A painter's studio should be a laboratory." Martin's show is that, a living room, an ashram, and an opium den. As is some of the surrounding neighborhood. On the front of an abandoned building across the street from the gallery hang several of Martin's brightly colored geometric abstract paintings. A huge 9 x 11 foot black-and-red painting of a circuit configuration hangs on the side of the gallery building itself. Not only is it great to see an artist employ modern paintings as urban frescoes, it's nice to know that people don't deface them-a few of these have been here for years.
Martin's giving spirit continues inside the gallery, where a cushy couch, conga drums, Persian rugs, and pillows are scattered about. A soundtrack of classic rock plays (compiled by the artist's 15-year-old daughter); the smell of incense and roses wafts through the air. Adding to the hippie flavor are nearly 200 keepsakes or power objects hanging cheek by jowl, floor to ceiling, in the rear room. Here, there's art by Martin's friends, his influences and inspirations, as well as paintings by fellow underknowns like Don Voisine, Glenn Goldberg, and Joyce Pensato. There are postcards, newspaper clippings, obituaries of famous artists, pictures of his high school art teacher, a samba drum, Indian miniatures, and who-knows-what. It's his own private Salon des Refuse or a walk-in wonder cabinet. There are also works by Martin himself. All are abstract and have the feel of sacred diagrams by way of pop art and minimalism. Some are done on paper towel, stilts, and banana peels. His psychedelic and mystic leanings surface in titles like Epiphany and Mushroom People.
The poster for the show says as much about Martin being an artist's artist as it does about this clan and its future. A large color photo depicts more than 60 people among a half-dozen of Martin's works on the Williamsburg waterfront with Manhattan as backdrop. Among sundry dogs, drummers, and guitarists are fellow artist's artists like Mike Ballou, Win Knowlton, and Dan Walsh. In effect, Martin is saying one of two things: either "When Williamsburg is developed, real estate prices will skyrocket, and all this will be lost forever"; or "Come hell or high rents the Williamsburg spirit will change but live on." I believe the latter.