Clare Stephenson’s sculptures are barely sculptures at all; their physical presence is a humorously humble illusion. Made from silkscreen on wooden panels, her prop-like cut-outs stand in as representations of form: completely flat-packed, cartoon-like, and slap-stick. This game of perception, of subverting material with image and vice versa, is redoubled in her work’s development process: each sculpture-image is assembled from photographs of other sculptures that have been cropped and photocopied from books. La Belle Toute Savante presents a camp model of sophistication. With a pilfered coiffure as a stole and twisted arm borrowed from ’wardrobe’, she is self-consciously dressed up in the costume of art history. 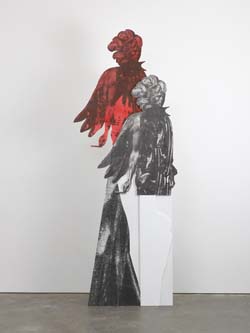 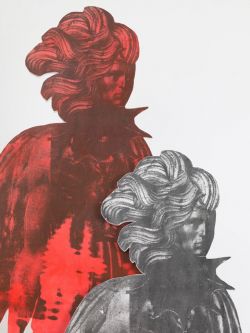 Comprising a composite image and its double, Stephenson’s Ornament & Boredom suggests an underlying discontent beneath the harmonious surface of serial production. This androgynous figure combines the glamour of Warhol’s Pop portraits with the excess and distortions of Baroque sculptural form, becoming a complex hybrid. 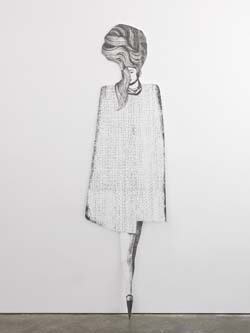 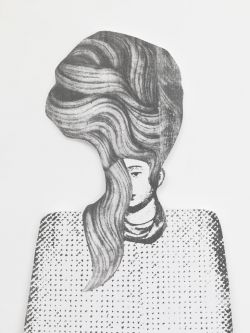 Clare Stephenson
Our Lady Of The Conscious Optics

Precariously balanced on pointy-stepped tip toe, Our Lady of the Conscious Optics embodies a fashion of aesthetics. The figure, a compilation of enlarged and recycled images, resonates with the ghost-like presence of parlour tricks, an apparition of plywood and the transient inscription of printer’s ink. Rejecting its own physical existence, Stephenson’s piece resolves as a sculptural facsimile: conveying form as a sketchy construct of perception.

With old hangers encrusted with plaster, squinting HonorĂŠ Daumier busts and other crude waste tacked together to form a messy semblance of order, Clare Stephenson's sculpture and drawings sit uncomfortably between craft, Pop, DIY and a taste for the nasty side of French culture. She makes art the way cranks build models, with a scrupulous attention to detail and a respect for the junk she works with, but no real hope of seeing things last. Small but industrial in form, her humorously futile monuments are mainly used as source material for drawings, and the exhibition at Talbot Rice comprised five recent works on paper situated around a single sculpture in the centre of the gallery. Lit from above by the building's elegant glass dome, each work offered a different viewpoint on a dizzyingly slanted use of transformed detritus.

Mouvement Suspendu (Suspended Movement, 2005) appeared happy and stoic in its isolation. Consisting of pieces of dowel carved to form 13 small strips of bamboo, and rendered complete with black gouache curls to show the hollow centre at each end, the work sits on a square platform crudely hewn from a kitchen surface to reveal a honeycomb interior on three of its four sides. Mounted on a plinth, it is completed by a carved cigarette. Set at an angle, it's as if the cigarette is real and has been momentarily discarded by the artist during the work's development. A similar device exists in The Quite Quite (2003), where a cigarette is poised in the circle of the 'Q' of the sculpted word to evoke a mouth and an elegant form of spoken language. Referring to the exuberant drag queens in Jean Genet's Notre-Dame des Fleurs (Our Lady of the Flowers, 1944), this was the only sculpture proper in Stephenson's previous exhibition at Transmission in Glasgow, and by turns Mouvement Suspendu performed a similar routine at Talbot Rice by appearing to goad the drawings that surrounded it in an affected manner.

The Failure (2004) is essentially a drawing of old pieces of wire, the word 'Hardy' crudely modelled in wood, pieces of two-by-one, a small French bust and discarded pieces of clay. Involving the use of aerosol paint and pencil on paper, each element in this drawing is economically rendered in various forms of atomized colour. By comparison, Model (2005) - the most recent drawing in the exhibition - signalled a shift through Stephenson's sharp use of ink. With the image rendered in bright pink, there's a different kind of clarity in this work, a Poppy draughtsmanship that perhaps historically echoes the eccentric and crisp pictures made by Colin Self in the 1960s. Most of Stephenson's compositions are isolated in the centre of the paper, and some, such as Model, contain a strange perspectival device of coloured horizontal bars, which recede and cross between gaps in the drawing's central motif. In Model the composition shifts from an acute angle, represented by the unreconstructed corner of an old coat hanger, to curl and snake away out of control to form a dragon-like character, laden and encrusted with plaster or clay. With less likelihood of accidental spots from a spray canister, the drawing's clear control provides a more exact form of indeterminacy through the highly planned ambiguity, isolation and entanglement of the image in its semi-transparent ground.