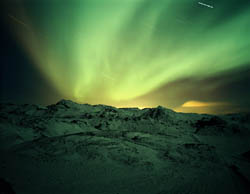 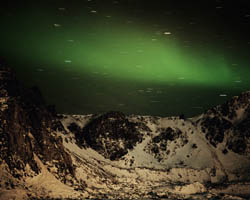 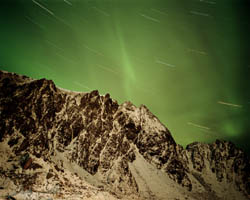 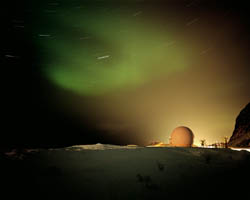 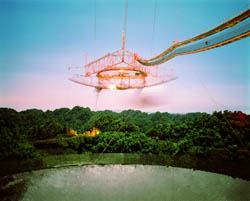 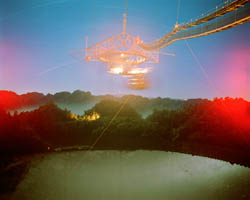 
The National Maritime Museum has invited Dan Holdsworth to be its 2006 artist for the New Visions contemporary art programme At the Edge of Space, Parts 1-3, will open on 8 June 2006.

Dan Holdsworth's large-scale photographs explore the limits of perception and the possibilities of photography. This exhibition focuses on the artist's interest in communicating the invisible realms of time and space, featuring work from the series 'At the Edge of Space' (1999) and 'The Gregorian' (2005), alongside the new commission 'Hyperborea' (2006).

These three series show the:

- And the Northern Lights seen from the limits of Reykjavik in Iceland and from the Andoya Rocket Range above the Arctic Circle in Norway.

'At the Edge of Space, Parts 1-3' is an investigation into the possibilities of human knowledge.

At the edges of what we understand - be it the limits of space, time or nature - human consciousness comes into focus. Holdsworth's photographs reveal a sense of the contemporary sublime - his expansive landscapes create a vertiginous pleasure in the immensity of what we do not comprehend.
Led by his personal responses to each environment he visits, the artist seeks out locations to photograph through their feel and atmosphere.

Using long exposures, Holdsworth's images reveal the world around us in a way that the human eye could never capture. Filled with both time and timelessness, these photographs offer a window to another world that exists beyond our knowledge and experience.


Dan Holdsworth takes photographs at the edge of things. Early works were set in the anonymous hinterlands of urban sprawl - car parks of vast shopping centres, service roads that snake around bleak countryside, unkempt grassy verges beyond fenced-off civilization. Often one particular dominant feature arises from these non-spaces like a lumbering, mechanical alien; for example the illuminated, empty advertising board of one of Holdsworth's most well-known pieces, 'Megalith 1' (2000).

Working serially, Holdsworth tends towards locations that are end-points of this world either geographically or symbolically. The former can be seen in works like 'The World In Itself' (2002) set in the blasted, volcanic landscape of Iceland, the latter, in a number of pieces set at space-ports and rocket launch-pads.

For his new series, of which three are presented at STORE, Holdsworth travelled to Arecibo, Puerto Rico, to the site of the world's largest radio telescope.

It is a place where science meets nature in a literal way through the constant battle to keep the jungle from invading the site, but also in a more abstruse way through the function of the telescope to reach out into the depths of the universe. Holdsworth's particular object of study was the Gregorian reflector system - a metal dome suspended from a circular track 450 foot in the air above the main reflector.

Through the use of long exposure times the slowly rotating dome is seen as a metallic blur. Each work is poised at the border between human invention and untouched nature - the observatory is poised at the edge of lush rainforest, the Gregorian dome is a blur dissolving against the azure blue sky.