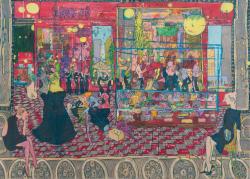 152.4 x 213.4 cm
Driven by line, Dasha Shishkinâ€™s colourful drawings display an inventiveness and confidence not limited to fluid draughtsmanship. Her large-scale compositions on Mylar are inhabited by a psychedelic multiplicity of scenes and characters, bordering on the comical and the grotesque â€“ a glimpse into a strange, parallel world where pre-assumed rules donâ€™t apply.

Crowded into vertiginously patterned interiors, her blank-faced figures of elegantly clad and high-heeled women sit cross-legged, stand behind counters, talk among themselves as in a ball or ponder alone, lingering in erotically charged poses as if morphing into each other in a dream fantasy that seems to take lifeâ€™s superficiality as its subject. 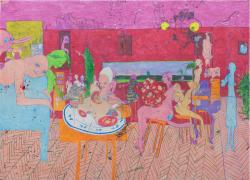 Acrylic and pastel on Mylar

Four parts, overall size: 152.5 x 213 cm
In interviews Shishkin has explained that she doesnâ€™t think of her works as paintings, but strictly as drawings; she considers the colour, whether it be paint or pastels or anything else, to be a kind of filling, not defining.

But colour is a crucial element shaping the form of her pictures, laying down a neon, sugary context and constant energetic distraction from the odd nonchalance of her carnival players, as seen in the large-scale What Does It Matter To Her Ever Creating Womb If Today Matter is Flesh And Tomorrow Worms. 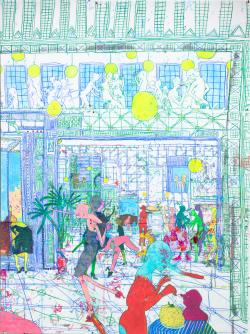 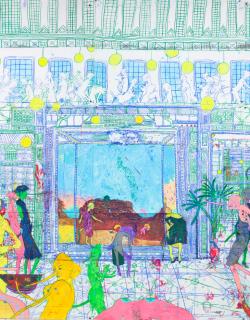 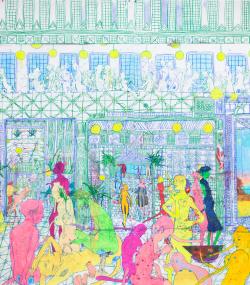 Acrylic and Crayon on Mylar

12 sheets, overall size: 243.8 x 406.4 cm
Survival Takes A Good Memory, another large-scale drawing, highlights the sinuous quality of her lines and their visceral precision truly through the bold colour blocks, like a coloured-in surrealist childrenâ€™s book or Schiele on acid. Not Sad, Just Sighing depicts another oneiric performance by a familiar high society debutante cast, here even more cartoonised and claustrophobically embedded within a dizzyingly patterned gallery arcade; beyond the Dior gowns and chic pencil skirts, a desert.

Some have seen similarities between her work and the visionary, idiosyncratic action tableaux of outsider artist Henry Darger; her penchant for traditional low-brow art supplies, manneristic repetition and for phallic accessorizing (for starters, take a look at her figuresâ€™ noses and nipples) certainly reveal a similar fragility and fantastical obsessiveness.

Speaking with Dasha Shishkin for this month’s Nylon was one of the greatest pleasures I had before Christmas. She was courteous and gracious and really funny. And it just made me want to dive headfirst into her work and follow her mad crazy protagonists. We spoke about calendars and stickers and the thrill of marking important dates in some way, things to look forward to and to work toward. The piece is in print. But you can read it here too. And make sure to see her show, if you’re in Ohio, and the DAC March 3.

Dasha Shishkin is a maker of surprising and explosive things. The Russian-born, Brooklyn-based artist weaves a world of sinuous lines, kaleidoscopic colours, and psychedelic imagery. From large-scale wall drawings produced in situ to tiny etchings, her work vacillates between figuration and abstraction.
Since completing her MFA in Columbia in 2006, Shishkin has shown her work extensively and is present in major collections, from MoMA and the Whitney in New York City to the Art Institute of Chicago. Currently preparing her first solo museum show, opening at the Contemporary Arts Center, Cincinnati next month, she’s locked into her intuitive, organic working process.

The Moscow-born, New York-based painter and printmaker Dasha Shishkins work has been in the spotlight since her inclusion, as a Columbia University MFA student, in the 2005 edition of P.S.1 Contemporary Art Centers "Greater New York." The show’s co-curator (and current P.S.1 director) Klaus Biesenbach compared her work to that of Goya and Brueghel. Others have conjured Egon Schiele, Brice Marden, Henry Darger — even Japanese wood prints. But Shishkin’s pieces belong in a category of their own. Her abstract landscapes, bizarre scenes, and images of borderline-perverse human interactions — which tap into the viewer’s own thoughts, dreams, or fantasies — are devised with bold, rich colors and tactile textures, using domestic materials like wallpaper and unique media like Conté crayons and Sumi ink. Her show at Zach Feuer Gallery last fall drew scores of visitors, and the general consensus was "wow." A new body of work appears at Gió Marconi Gallery, in Milan, starting this month. Marina Cashdan spoke with Shishkin about her practice and the much-anticipated show.
The titles of your works tend to be enigmatic and playful — for example, Come On and Blow It and Hideous Potato, missed terribly, with likes and no hate. Where do they come from?
Titles are like a cherry on a cake. The cherry does not make a cake a cherry cake, but it is still there to attract or distract an eye. I like words very much. Titles are separate from the pictures for the most part, and they are as much of a distraction and a pair for the image as my name is for what and who I am.
Can you talk about the method and madness behind incorporating various textiles and materials into your paintings?
There is not much madness or method in the approach. Some materials are underdogs of an art shop or a studio — torn, wrinkled paper, ripped canvas, leftover fabric — and I feel their neglect. But it is not out of mercy and in no way a condescending step down that I use them. It is a "what if" and "why not" thought, along the lines of "equal opportunity" for art supplies.
Also, I don’t consider them or call them paintings but drawings, because that is what they are to me — colored-in drawings. But then again, "painting" is just a name.

It’s not everyday that you skyrocket from MFA candidate to art-world darling, but that was very much the case for Dasha Shishkin, whose inclusion in 2005’s Greater New York, pushed her well beyond Columbia’s walls.

Her brightly colored drawings are strikingly reminiscent of Egon Schiele, yet retain utter autonomy with their cartoonish subjects and oft hyper-sexualized scenarios. A Boy’s Best Friend Is His Mother, 2011 certainly fits the mold, with blazing red nipples dotting its surface and a prim older lady seated watching the affair unfold.

Is there a definable movement in contemporary painting? Is painting (or perhaps that movement-oriented notion of painting) dead?
D.S.: PAINTING IS ALIVE AND WELL.

Do you think it is appropriate to maintain delimited disciplines in art today; is it something you consider in your practice?
D.S.: IT IS WITHIN THE ETIQUETTE.

ABC is an exhibition, yes, but also a fair. How do you relate to the market?
D.S.: WITHIN REASON.

What’s your favourite colour?
D.S.: AS GOD INTENDED, OUT OF A CAN.