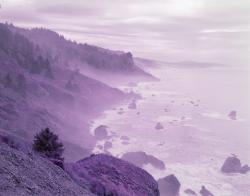 David Benjamin Sherry
All Matterings Of Mind Equal One Violet

Given his dramatic mountainscapes infused with otherworldly light (the colours are cast at exposure or later during printing, and the kind of cast depends on his mood), one might expect David Benjamin Sherry to respond to the question of key influences by naming great American photographers like Ansel Adams or Minor White, but instead
he cites a roster of painters or installation artists who work with colour and light – among them Robert Irwin, John McCracken, Ann Truitt and Paul Thek, along with artists who “take flight from nature”, like Robert Smithson and Georgia O’Keeffe. 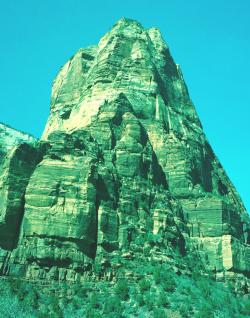 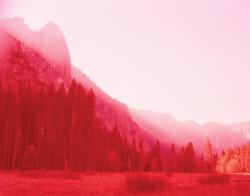 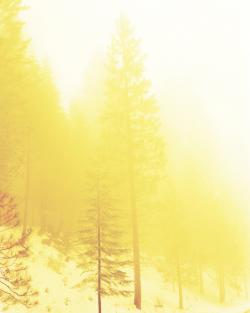 When Sherry drove through the American West he liked to have Brian Eno on his headphones and when he paused he liked to have the poems of Walt Whitman close at hand. Sherry is, in a word, a romantic – though, he hastens to add, “an extremely forward thinking one!” One of his romantic attachments is to analogue photography. (Sherry stresses that he has nothing against digital picture-making – it just isn’t for him.) But it isn’t nostalgia that drives his attachment to the medium of colour film. He simply believes that there is still “territory left untravelled” along that route, and he intends to explore it. 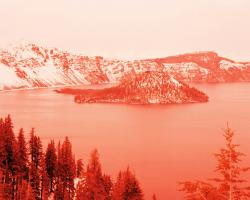 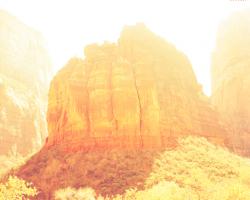 27 year old photographer David Benjamin Sherry likes to fuck with nature. For his first solo exhibition in Berlin earlier in the year, ŌĆśSensate TranscendencyŌĆÖ, Sherry took a road trip through the Pacific Northwest, photographing the panoramic landscapes which he later manipulated in his studio. The resulting images are arresting, as we see a desert cliff transformed into the face of a devil or a view of Death Valley transformed into ŌĆ£an orgasmic tie-dye vagina holeŌĆØ.

Sherry was born the youngest of four kids, in the wilds of Woodstock to hippie parents. When his parents split, his mother took up with a lesbian artist who introduced young Sherry to art. A fantastic art teacher went on to inspire him to apply to the Rhode Island School of Design. It was there that he ŌĆ£fully realized art history. The level of intensity there was so amazing. I would not sleep and I would just make art, and be really creative.ŌĆØ

A summer internship assisting David LaChapelle, aged 19 helped consolidate his ambition. ŌĆ£It was awesome. But I was the worst assistant ever because IŌĆÖm a space cadet.ŌĆØ You can see traces of LaChapelleŌĆÖs influence in the heavily saturated, staged images Sherry makes, brimful of emotion and tension. He moved to New York thereafter and met up with the endlessly chronicled Downtown set of designer Benjamin Cho and fellow artists, Ryan McGinley, Dash Snow and Dan Colen. He muses, ŌĆ£I was a bit lost when I first moved to New York. Wanting to make art, I got entered into this family of friends. So warm and loving and very community based.ŌĆØ

He applied to the MFA programme at Yale and to his surprise, got accepted. Famed photographer, Philip Lorca-Dicorcia was a mentor for him there and ŌĆ£changed the way I thought about art photography. Photographing from your head and almost making like cinema.ŌĆØ Outed by Lorca-Dicorcia during a critique, the male gaze became a secondary subject in SherryŌĆÖs work as dreams or more accurately fantasy took a more prominent place.

While contemporaries like Dash Snow and Dan Colen relentlessly mine their excessive lifestyle for inspiration, Sherry delves deeper into the unconscious for his. Echoes of the surrealism of Cocteau, the eroticism of Genet and the occult perversions of Kenneth Anger pervade his work. His pictures are vast and intimate at the same time. Though his pictures may appear fantastical, itŌĆÖs rooted with a gritty human touch. Sherry is a hardcore classicist. ŌĆ£I donŌĆÖt do digital. Everything is analogue. I build the sets by hand. The type of art IŌĆÖm into, the magic, fantasy based work was all created by hand.ŌĆØ

Sherry has been also been following in the footsteps of Andy Warhol, Jack Pierson and more recently, McGinley in negotiating that fine line between art and commerce. In the process he has been creating some of the most memorable fashion editorials in recent times in magazines such as Dazed, Another Man, NY Mag and V Man. Check the sun-bleached idyll of Kim Gordon in Rodarte for i-D or his sly, witty take on big budget advertising in the recently launched at Frieze, art biannual Tar.

For his much anticipated first solo show in New York next year, Sherry takes a leaf out of the work of Lucas Samaras (another inspiration) in using himself as the subject of his work. Prepare to get lost in darkness, love, death and further excursions into the unknown.

New York based photographer David Benjamin Sherry (b.1981) has gained success in recent years through his bold experimentation with photography. After receiving an MFA at the prestigious Yale University, Sherry has gone on to exhibit prolifically worldwide, as well as publishing an extensive book with Damiani. We had a chat with David about life, art and smashing very expensive cameras.

Hello David.
Hello.
So tell me about your introduction to photography...
My first official introduction to photography was in high school, I took a photo class. Although, having said that, when I was six years old my dad gave me my first camera. I inherited a Hasselblad which I immediately took into the woods covering it in dirt followed by smashing it into the ground with a hammer.
You smashed a Hasselblad?!
Yeah, I guess I did. It was a really nice one as well. I regret doing that, I wish I had a spare Hasselblad now.
I know how you feel, my dad gave me a Canon 8mm video camera when I was around that age too. I started by pretending it was a gun, then I took it apart with a screwdriver because I wanted to look at the circuit board.
[laughs] oh, that's awesome.
I guess we had our own simplistic fun...
Yeah, well it actually formed a destructive pattern with my relationship to photography.
What do you mean by that?
The idea of breaking a tool then picking up the pieces and making something new with it interests me; my approach to the medium is slightly strange. I actually started shooting pictures to document my life.
It seems to have taken a more surreal turn, maybe more representational than before?
Exactly, though my early work was very realist, which wasn't particularly exciting for me. I then started shooting the fantasy of how I see things in my mind; how I remember places, people and ideas are all represented in my photographs. The idea of documenting my life still remains. However, it's a closer representation of my imagination and how I was feeling when I took the photograph.
Are the colours you cast over your photographs associated with different memories?
The colours represent how I was feeling at either the time of exposure or printing. I think they probably mean entirely different things to the viewer though.
I guess everything is open to interpretation. Did you find it difficult in the beginning working so differently to your peers?
It was extremely difficult convincing my professors that the colour casting was interesting. They described it as a ''filter'' over my pictures that lessened the beauty of the original photographs. You have to bear in mind that I went to one of the most traditional MFA programs out there.

You said earlier that you recently smashed your computer. Do you get angry like that often?
Well, I'm a little bit rough with my electronics to begin with. I'm just kind of a clumsy guy. I smoke weed and I'm always dropping things. I've dropped a lot of cameras in pools.
So the smashed computer was an accident?
Yeah.
You got any weed on you right now?
Right now? Ahh... no. I left it home.
Tell me about the book you've got coming out.
The book is coming out in September.
Who's publishing it?
Damiani. They're publishing my first book. I'm really excited! It feels really good, it's something I've always wanted to do.
What's in it?
It's like my body of work, I guess.
Thus far.
Yeah. It's been really interesting to put together because it is a range of everything. The images are all back-and-forth creating this... rhythm of photographs that all pertain to my life. It documents my life.
What's your daily routine like?
I wake up a lot earlier than I used to.
What time are you getting up?
I set my alarm for about eight, get out of bed around nine.
What are you doing in bed for an hour?
Lucid dreaming. I love that feeling of 'I can't get up' you know? And your mind starts wandering and you just keep yourself on the verge of falling asleep.
Yeah. Why are you into techno again?
Well, I used to go to raves when I was twelve, really young, I did acid and...
You did acid when you were twelve?
Yeah, I grew up in Woodstock and I'd sneak away and come to the city.
To rave.
Yeah. I was on 20/20 with Barbara Walters.
At a rave?
Yeah. She was like "'Special K' is for Ketamine, 'E' is for Ecstasy, 'Coke' is for Cocaine."
No.
Yeah.
No.
Yeah.
And you were dancing around behind her and your mom saw it on TV?
Yeah.
That is supernaturally unfortunate.
I know.

28-year-old photographer David Benjamin Sherry creates enthusiastic, eccentric photographs that transform the landscape, his friends, and himself into a sometimes psychedelic, sometimes punk, always rich and rather glamorous fantasy of youth in paradise. His first book, It's Time (Damiani), collects 48 photographs taken since 2006, when Sherry entered the Yale MFA program, and represents the artist's body of art photography to date through exotic locales, and posed yet intimate moments. In the book we see Death Valley rendered spearment and mirrored over a horizontal axis, such that the center of the picture appears like a vagina; elsewhere the artist is painted gold like an Oscar Award, set against a wave of cliffs straight with the color palate of a Jodorowsky film. In the book's title photograph (2007), a dashing skinhead is shot from below, the trees and the sky visible behind him. The color is bleached out, so the photograph looks like a photocopy from a zine (particularly those by Toronto punk-chapbook publishers GB Jones and Bruce Labruce). Another bifurcation: this one is at two-thirds the height of the portrait, so that the sky both opens and closes, and the point of view becomes entirely disorienting.
The cover of the It's Time is a photograph of a cotton-candy Mt. Adams, Washington, pasted atop the cloth binding. It's an immediate tip-off to Sherry's dual interests in effervescent naturalism, and the material processes of photography. In interviews, Sherry consistently emphasizes that he doesn't digitally manipulate his work, which seems a moot point in an age where digital is the norm. But Sherry cares about analog photography, and his prints require extensive research, and a whole lot of patience, both on-site and in the dark room, to achieve. Describing an interest in process that defies cold formalism, Sherry says, "If I am romantic of the past for one thing, it would have to be the handwork, feel, emotional content, labor-intensive and traditional printing of photography." If photoshopping a picture relies on the assumption that a picture is a normalized fiction, Sherry's method holds out hope for an abnormal reality, even permitting, however melancholically, that the moment didn't occur quite as dramatically as it was recorded: "It's all about giving life to a still moment and trying to re-capture that energy through color, trial and error, and surprise."