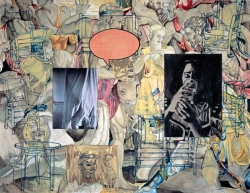 Acrylic and oil on canvas

David Salle has taken the device of pastiche, which is central to modern art, and made it both the form and content of his work. 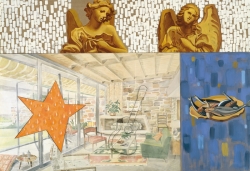 David Salle reflects the ongoing modern preoccupation with the problem of reconciling one’s individuality with the constant input of images and ideas from the outside, media-dominated world. 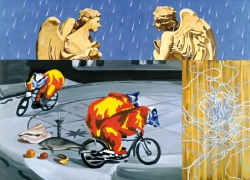 David Salle
Angels in the Rain

Angels in the Rain contains images of angel statuary, performing bears and acrobats as well as examples of the portraits, interiors and still lifes that continue to distinguish David Salle’s work. His works suggests a dramatic monologue or stand-up comedy routine. 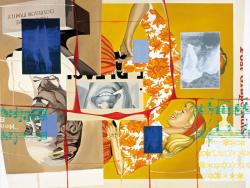 David Salle is the great pictorial conversationalist exploring the intangible relationships between subjects and their depictions. 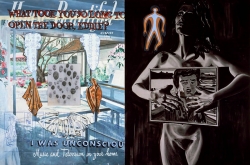 Portraits, interiors, still-life and abstraction are all conversing in similar time, together in a hyper-textual visual story. The connections do not seem forced, so much as nearly random. 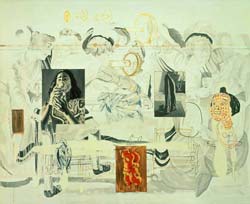 Using cinematic techniques of quick edits and the surprises of super-imposition, Salle’s images float in a world of simultaneity and equilibrium. 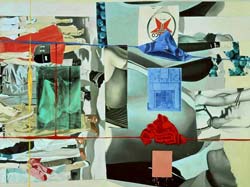 Salle’s images are all images which you can see through. They have a transparency, or they have openings, they have a space you can pass through. 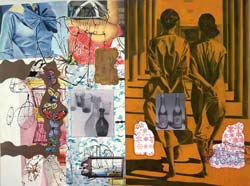 David Salle’s images come from a variety of sources including magazines, stock photographs, and pornography. Salle puts these images together in a painting the way another artist might create a collage using scraps of paper.

artseensoho.com - David Salle, Large Bear, 1998
Does style have anything to do with what I mean to say? Is my style-anyone's style-an integral part of the work's meaning or does it just serve to individuate me from other artists and them from me?

broadartfoundation.org - The Broad Art Foundation
David Salle has taken the device of pastiche, which is central to modern art, and made it both the form and content of his work. His canvases are populated with dramatic images lifted from sources as various as his own black-and-white photographs, eighteenth through twentieth century French and American painting, print advertising from the fifties, and "how to draw" manuals.

artseensoho.com- David Salle, Michael Rips, 1998
Much has been written since the early '80's about David Salle and his style of juxtaposition. The images appear to establish relationships of meaning, but the closer one gets the less one sees.

guggenheim-bilbao.es - Craig Houser on David Salle
David Salle is one of the most significant American artists to have emerged in the early 1980s. His unique style of painting was influential in the international revival of large-scale, figurative painting that characterized much of the artistic production of this decade.

guggenheimcollection.org - David Salle, Comedy, 1995
When David Salle emerged on the art scene in the early 1980s, his often oblique work was set squarely within the critical definition of postmodernism by virtue of its art-historical references and ambiguous combinations of original and appropriated imagery from both high and low traditions.

lacan.com - Excerpts of a conversation with the artist by Josefina Ayerza
About the bananas, is this a new image or is it me that hasn't seen the bananas before?
I used it before but not much, I used it in one painting about ten years ago, so it is a little bit familiar and a little bit new

findarticles.com - David Salle talks to Robert Rosenblum
ROBERT ROSENBLUM: We should of course begin with the '80s. But I'm interested in what happened to you before the curtain went up.
DAVID SALLE: I came to New York in 1975 after CalArts. I floundered around for a few years, happily. I loved being in New York.
RR: Your signature style is always so clear in the work we know that it's hard to imagine what led up to it. What was it like before 1980?