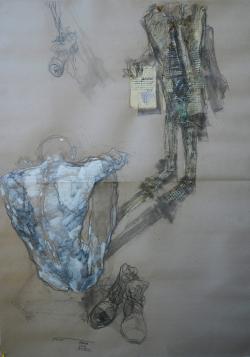 In Dawit Abebe’s observations of human kind, strange figures turn away from the world. As silent witnesses, their often-gaunt affliction and melancholic surroundings suggest they are bodies in exile, or the subjects of an unknown trauma. Together, they command the foreground of Abebe’s narrative drawings, in which proportions become distorted through surreal re-imaginings of a parallel reality. Their limbering forms can be seen hurling shadows along vertical lines, as their bodies dwarf cities in their wake. Devoid of individual description, these hybrid ‘beings’ become stationed in permanent view, eclipsing whatever there is to be witnessed ahead of them: the fate of mankind perhaps. 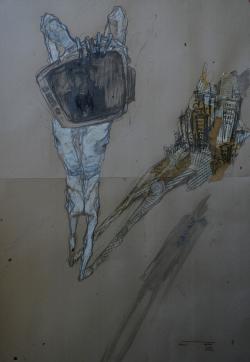 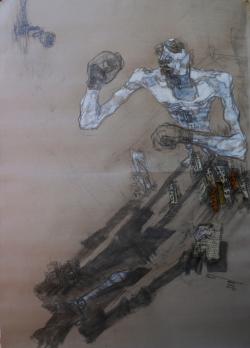 In Ethiopia, the project of modernity is one characterised by the collision between tradition and cross-cultural associations. Abebe’s schematic compositions recall the scales of Ethiopian Jazz, as much as they do an impressionistic rendering of the European nude. Rooted in an urban locality, his practice is increasingly concerned with questions of modern surveillance and human interaction in the face of new technologies (Project X, 2014). While rapid development of technology is galvanising change in cosmopolitan Africa, it has brought about the alienation of traditional values within certain communal groups and societies. The artist gives form to a vision of human experience that is uprooted from an everyday reality; his occupied subjects seem to be caught within the revolutionary current of Ethiopia’s past, one marked by the inescapable shadows of landless citizens. 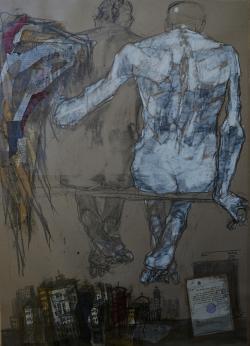 Abebe’s poetic inflections lead him into a study of human behaviour, through which the body becomes a vehicle for the navigation of modern surroundings.
By way of examining the transformations of interaction between bodies and structures, technology and forms, there emerges a unique conception in the public sphere. Abebe’s beings exist between borders, and having done away with the bureaucracy and confinement of everyday life, they are given an imagined autonomy born of a doubling of concurrent states of being both anywhere and nowhere. 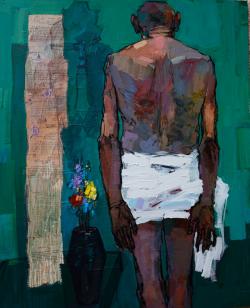 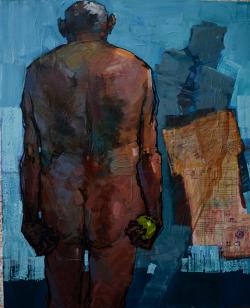 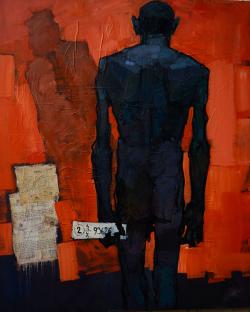 The KH ‚Äì Kristin Hjellegjerde Gallery, London, proposed ‚ÄúBackground 2‚Äù, an amazing exhibition by Dawit Abebe. It had different but involving ideas. Abebe is an Ethiopian artist who works and lives in Addis Ababa. He did not move to another country. Therefore his work maintains a sort of genuineness, and returns a fresh and uncorrupted point of view on changes happening in the area.

Dawit Abebe, in fact, is exhibiting also at Pangaea II, the latest show of the Saatchi Gallery, London. The focus of Pangaea II is the new developments on the African and South American continents.

In a sort of witty ‚Äòspin off‚Äô, Kristin Hjellegjerde Gallery, London, presents this artist of stunning abilities ‚Äì both for the ideas expressed but also in the technique using the media. The subject of his work is the contemporary complicated relationship between history and technology, and the ways in which these two elements live together today.

The exhibition ‚ÄúBackground 2‚Äù was made of backward portraits. Abebe has also chosen different age groups for his subjects, putting the accent on the older generation. There were eighteen canvases on display, in which the depicted subjects were man only and taken from the back.

Dawit Abebe said: ‚ÄúFrom the back, because in our culture it means they are looking at the past. In recent years Africa has seen big developments. I feel that the coming of technology has seen a rapid transformation in Ethiopia. The younger people know less of our own history and are more involved with pop culture and social media.‚Äù

From Ethiopia were works by Ephrem Solomon and Dawit Abebe, both of whom are experiencing a rapid trajectory having recently been acquired by world-renowned art collector, Charles Saatchi. Ephrem Solomon is represented by Circle in Kenya.
Since his set of three paintings titled ‚ÄòThe Poor Gambler,‚Äô ‚ÄòUntitled,‚Äô and ‚ÄòThe Gambler 4‚Äô sold for a total of Sh704,400 at the November auction, Solomon‚Äôs work has skyrocketed in demand, experiencing an impressive increase in value.
Walking into the ‚ÄòEast African Encounters‚Äô exhibition at the Ramara showroom last month, Dawit Abebe‚Äôs gigantic mixed media painting ‚ÄòIn Between 6‚Äô (180x140cm) was straight ahead and stopped all in their tracks.
An anonymous male figure is set to the left of the canvas, his frame tilted diagonally so that his feet rest at the bottom-centre of the work.

MUDDLED KALEIDOSCOPE
Like slides of a muddled kaleidoscope, gashes of paint in hazy geometric layers seem to eclipse each other. A natural colorist, Abebe works in a truly symphonic palette of vermillion and oxidised reds, orange, green, piercing blue, scribbly charcoal black, stark white and varying shades of ivory.
Evoking crucifixion, this enigmatic male figure has his arms outstretched and pinned back.
Because his body is so intentionally disproportionate, it is highly emotive. His wide chest, tapered legs, and fractioned body exude a strain that is hard to pinpoint. The character appears strong and wise, too wise for this world, perhaps. There is a feeling that he is rising and yet somehow still chained to fate.
Upon closer inspection, we see a murky world behind him (possibly representing the past) and a clear path before him (the future?). It is as if trying to break through to the foreground but the strong posts of a jagged fence are in the way.
There is definitely an interference. Perhaps that is why he finds himself in that strange place, ‚ÄòIn Between‚Äô. We wonder, is Abebe portraying himself?

From Kenya, Jaroljmek selected some unconventional and radical artists; Kota Otieno, a free spirit who operates under the radar, perpetually astonishes his audience with ingenious use of materials.

Quite often the galleries at Alliance Ethio-Francaise in Addis Ababa seem too large for the work of only one artist. A number of solo-shows have left the visitor (at least this one) with the feeling that the artist was forced to produce an unrealistic amount of work to fill up the large spaces, and that this unfortunately happened at the expense of quality. However, this is not the case for Ethiopian artist Dawit Abebe‚Äôs soloshow, X-Privacy.
Dawit satiates the galleries with a variety of work in different media that guides the visitor through his somewhat melancholic universe. A number of small-scale canvasses frame the view of a stunning wall-size painting in one end of the main gallery. The sidewalls are occupied by large drawings on paper in massive frames, leading up to a large installation in the other end. Two empty beds with TV‚Äôs are hung from the ceiling and two of Dawit‚Äôs characteristic humans try to hold on to the sheets that connect them with the beds.
From canvasses to paper drawings to installation, Dawit maintains a red line through his exhibition and presents one of the best solo-shows the Alliance has presented this year. The show runs through October 25, so don‚Äôt hesitate to stop by!