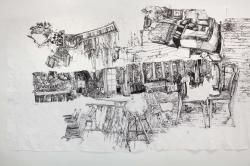 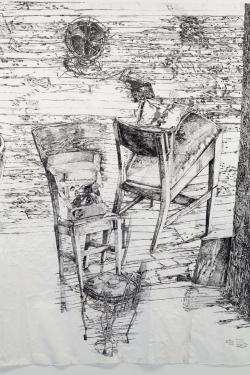 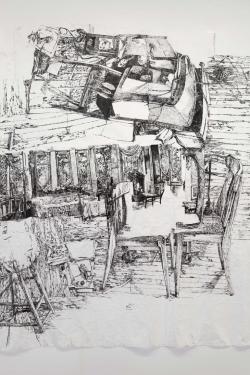 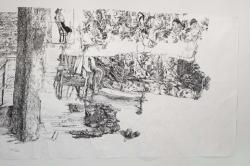 Dawn Clements’ works use drawing as a way to document and describe durational experiences: watching a film, for instance. Employing a painstaking precision of description and often writing notes directly onto the paper, Clements uses the act of drawing as a parallel to remembering: these are aides-memoires, attempts to hold transient things in the mind. Like the tracking shots of cinema, they sweep through interiors, gathering visual information, but by eliding the human presence, abstract place and setting from their narrative contexts. 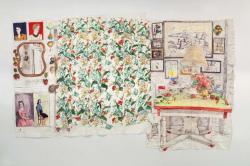 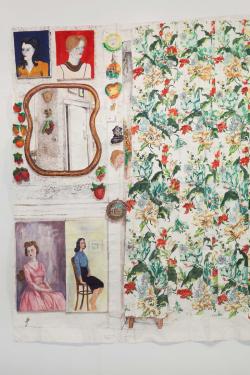 The act of the film’s being remembered – the emotional and intellectual associations within the artist’s mind – is Clements’ real subject. Travels with Myra Hudson, for example, takes Joan Crawford’s 1952 film Sudden Fear as its subject, in which Crawford plays the character of the drawing’s title. Travelling from left to right, Clements’ drawing parallels both the literal journey that drives the film forward – from Hudson’s book-lined study, down a sudden staircase, into the compartment of a zooming train – and the movement of Clements’ own recollections of the film, where certain details gain stronger purchase in the memory than others. 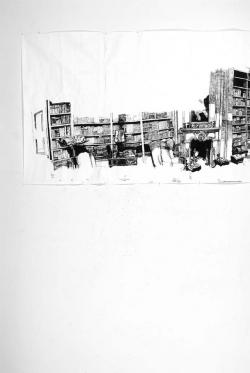 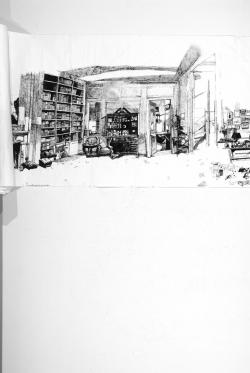 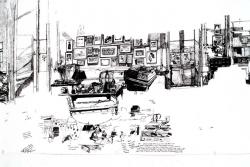 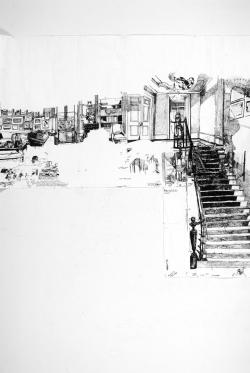 Similarly, the gouache on paper work Untitled (Colour Kitchen) began as a way to sustain the memory of something transient: in this case, a gift of roses from a friend. In drawing the roses, Clements found her work expanding through the desire to capture the roses’ immediate surroundings: a table, a lamp, the wall and the pictures on it, a patterned curtain. The work’s voraciousness – its apparently inexhaustible hunger to immortalise visual pleasure against the omissions and slippages of human memory – makes it a testament, of sorts, to the joys of looking. In Clements’ work, everything connects: the drawn line is like a thread that binds the present to the past.


On the occasion of her exhibition, Conditions of Desire, which will be on view from October 12 to November 12, 2007, at Pierogi Gallery, Brooklyn, Dawn Clements welcomes painter Eve Aschheim at her Greenpoint studio to talk about her life and work.

Eve Aschheim (Rail): How and when did you start working on the ever-expanding format

Dawn Clements: I was traveling in Europe in 1993, and I brought little pieces of paper to do travel drawing, so one day I was drawing a telephone in a hotel room, and it didnâ€™t fit on the page. I had wanted the cord to fit into the drawing, so I glued another piece of paper onto it. It was a very small piece that fit in the palm of my hand, but it was the first time that I really started to expand. I thought, â€śWow, there really is a reason to work on paper, because I can get as big as I want.â€ť

Rail: And when did panoramic enter into your work?

Clements: I started the panoramic work in about 2000, but, when I was in my early 20s, I did a panoramic drawing of a swimming pool on the grounds of a beautiful old estate in Brookline, Massachusetts. I would sit by the pool, a big, grand sort from the 1920s and draw. That was the first time I ever did a panoramic piece. It was only about four inches tall and four or five feet long. I carried the little roll of paper in my pocket. Also, in the late 70s, I had an idea to draw Washington Street in Boston. It starts at Jordan Marsh and Fileneâ€™s department stores, a red light district, but then it goes out of the city, through Roxbury, which was a poor black community. The road traveled under the elevated train tracks. And if you kept on walking, and it was a long walk, youâ€™d end up in Jamaica Plain at the Arnold Arboretum, Harvardâ€™s big botanical garden. I wanted to do a drawing of that walk because of the transformations. I never ended up doing it, and of course later I learned that Ed Ruscha had already done that with Sunset Boulevard. So panorama has been a long-time interest, and movies get me thinking in terms of scanning spaces and moving through space.

Rail: When did you do your first large panoramic drawing?

Clements: In 2000, when I was in residence at Middlebury College. I started with a chair. I liked the way it was drawn, but I didnâ€™t like it as a drawing. It seemed like just some dumb little thing. So I thought, if I add onto this, then maybe Iâ€™ll draw the whole wall. And then I thought, oh, this is interesting, I could do the whole room. After four months I had drawn the whole apartment.
Rail: And you donâ€™t have a single viewpoint when youâ€™re working that way; itâ€™s the mapping of space, as opposed to perspectival space. Are you interested in the Flemish painters, Jan Van Eyck and Rogier Van der Weyden, and the folds in their fabrics? This new drawing â€śUntitled (Color Kitchen)â€ť has 90 square feet of floral curtain and the paper itself looks a lot like a fabric because of the way itâ€™s hanging: the creased paper resembles an unfolded tablecloth
Clements: Someone came over and said, â€śI like the way you used collage in this piece.â€ť I said, â€śYou mean sort of collage-style.â€ť And he said, â€śNo, collage!â€ť I said, â€śBut thereâ€™s no collage in that.â€ť And he said, â€śDawn, youâ€™re crazy. You painted this?â€ť (Laughs) He thought the curtain was pasted on

Rail: Well, thereâ€™s this uncanny alignment of the subject matter, which is pattern and fabric, with surface and support, echoed in the way the drawingâ€™s made; one sees the fabric optically, but also experiences it physically through the sensation of the paperâ€™s folds

Clements: Thatâ€™s definitely true. The drawing is so bent, and there are so many creases and folds, that sometimes you donâ€™t know which are the rendered folds and which are the three-dimensional paper folds. I definitely am interested in Van Eyck and certainly in the baroque still-life painters. Very early on I was interested in vanitas painting and how still-life painting could express human presence through absence.