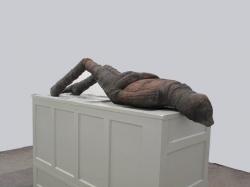 
‚ÄòThe screaming abdabs‚Äô is a British expression for an attack of extreme anxiety or irritation, a slang term from yesteryear also used to describe the terrors of alcohol withdrawal: delirium tremens, commonly referred to as the DTs. Symptoms include confusion, disorientation, changes in level of consciousness, agitation, delusions, irrational beliefs and hallucinations. It‚Äôs fitting, then, that the window of The Showroom - host to Des Hughes‚Äô installation The Screaming Abdabs (2003) - has been filled with hundreds of spent wine bottles. Sometimes the world makes more sense through the bottom of a glass.

In the first of two rooms plaster cast figures are frozen in contorted poses, either ducking for cover, balanced precariously against outsized saw blades, or up-ended, tugging at stubborn plaster-spattered jeans. Prone on its back, one of the figures has a bright red bird‚Äôs nest balanced on its crotch; a small brass object flutters above it. Another figure sports multicoloured garlands constructed from Hughes‚Äô former paintings. These are crippled, absurd and dysfunctional characters caught in the cold fluorescent light of the gallery. Seemingly unaware of their comic situation, they struggle to make sense of their surroundings and their relationship with the world at large. Scanning the room, your eye settles on a cloth badge, safety-pinned to a plastered limb and inscribed with the words ‚Äòshit happens‚Äô - an abrupt, resigned-to-its-fate version of the 1960s slogan ‚Äòlet it be‚Äô. A reminder perhaps not to take the actions of this motley crew too seriously.

Moving through to the back space, black-gloss plinths provide the platform for a curious cottage industry. A mini brick chimney with gaping mouth and open eye sockets sits next to a small pile of cast bricks. Handmade implements sit in neat rank and file, from wooden saw and feather duster to a pink clay version of a 1970s Laughing Bag. The skylights and the floor, covered in brown tape, emitted a soft light. It‚Äôs a funky and somewhat disturbing collection of objects: a mise-en-sc√®ne somewhere between The Texas Chainsaw Massacre (1974) and Walt Disney‚Äôs Fantasia (1940): an artist‚Äôs workshop with sinister intent.
Hanging from the ceiling was a makeshift chandelier constructed from balls of sticking tape and plastic drinking straws. Crooked plaster fingers screwed to the wall clutch at electrical cables. A series of green bottles diminishing in scale provide plinths for misshapen green orbs, an inverted form reminiscent of a snot bubble hanging from a child‚Äôs nose. Propped in a corner of the room, a foam hand with an extended forefinger reads, ‚ÄòCome on you‚Äô: a peculiar form of comic support for the unknown worker. Rather than the grand narrative, perhaps Hughes‚Äô real pleasures are to be found in these supporting acts, moments of deadpan clarity in a world of uncertain purpose. Any grand utilitarian statement quickly has the rug pulled from under it as objects that suggest function only fall to the ground in silent mirth.