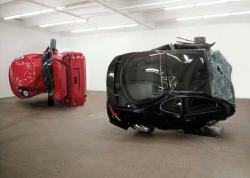 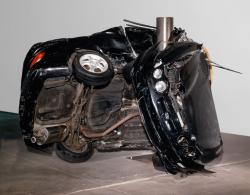 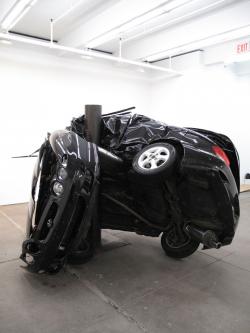 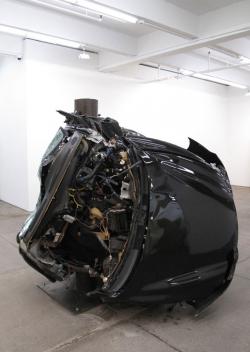 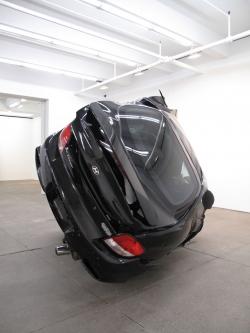 Dirk Skreber
It Rocks Us So Hard Ho Ho Ho 2

The artist’s choice of subject riffs on his memory of the inhuman but fascinating spatial energy where he first encountered this imagery. “When I was young… the industrial area I lived in [Northern Germany] inspired a sculptural and mechanical outlook more than a painterly one. If I were to write a novel about this area I would call it ‘The Region’… At an early age I subconsciously perceived this industrial environment as sculptural”. Exploring the formal potential of the car and bending its natural anatomy, away from any predetermined functional sense, became a central preoccupation for the artist’s imagination.

Dirk Skreber
It Rocks Us So Hard Ho Ho Ho 3

Skreber obsessively painted cars wrapped around poles before moving onto the real thing. “Although I was satisfied with the paintings, I wanted to go closer to the material reality of my subject. I started thinking about a simulated crash, which was staged according to my sculptural vision… While making these works my concern was not at all about accidents but rather to use a massive and completely real transfer of energy as an opening door to a perspective on the flow of physical laws and metaphysical energies, loading and unloading, transforming and retransforming like batteries or spiritual bodies.”

Having exhibited widely in Europe, Dusseldorf-based Dirk Skreber recently made his New York solo debut with a show consisting of three enormous oils (99 by 158 inches each) derived from magazine and Internet photographs, and a fourth, quite different canvas of the same size that related to a sculptural installation in the gallery's back room. The five works, all 2004, had in common an eerie, oppressive stillness and sense of dread.
The photographic nature of the source material for Untitled (Nowhereland) dominates the painting, an arresting image of a flooded interchange on a rural expressway, in bright daylight, with nobody in sight. The motif is framed from an aerial vantage point. The foliage is cursory, as if the artist were cleaning his brushes, but the receding watery plane that stretches across the canvas is quite beautiful, a delicate blue-gray across the top of the picture sinking to murky bronzy greens along the bottom. It is sliced through by curling, chalky bands of roadway. The lagoon within the loop formed by each flooded approach ramp is filled with an unexpected and unidentifiable black oval. Another work renders a tiny island surrounded by flecked, reef-lined waters and marked by weirdly fleshy-colored thatched-roof huts. The village is unpeopled, which makes it spooky. A tarry beach sets off the pink and green landmass from the encircling azure sea, isolating it like a scab.

Dirk Skreber's recent works are disasters. In the paintings especially, the built environment meets its match in the original expression of the hand of God on a bad day: the flood.

Skreber's paintings romp in the buffer zone between abstraction and representation, engaging in material play that seems less about irony or gee-whiz effects than about expedient ways of laying down color or line at the service of an image. In Untitled (brown flood) (all works 2001), perfect rows of packing tape cover the massive canvas; the slight color variations repeated uniformly in the tape, a byproduct of the manufacturing process, are aligned to create diagonal tipples that read as both an Op-ish visual effect and a representation of wind disturbing the surface of muddy water. This is, after all, an aerial view, and the brightly colored, lozenge-shaped marks in oil paint on the tape turn Out to be the roofs of cars not yet completely submerged beneath the rising flood, some still lined up in the places where they were parked and some just beginning to be swept along. Tape also forms the ground of Untitled (black flood), here a slightly shiny but dark void from which emerge a few angular shapes, aligne d according to a skewed grid: the roofs of buildings along city streets popping up above the flood line at night, or perhaps at midday with lusciously dank water.